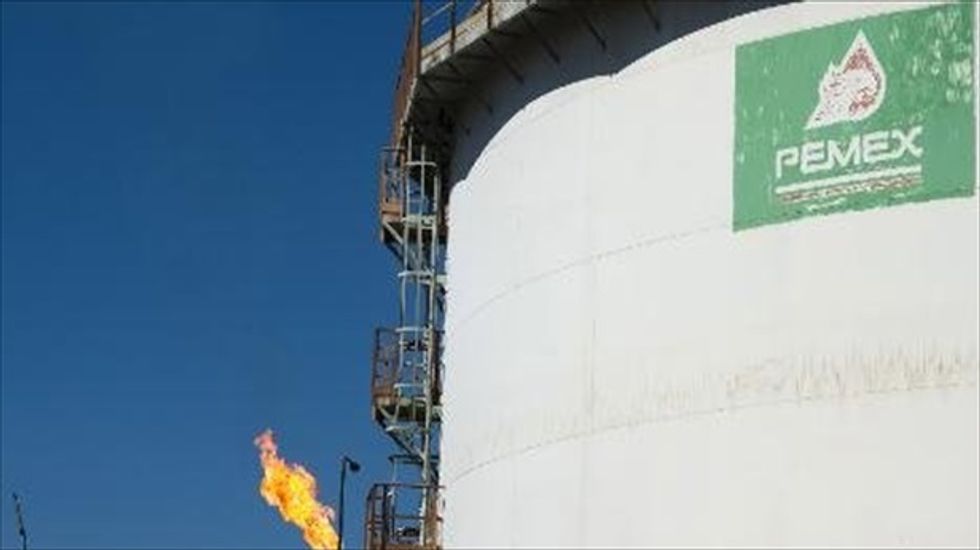 A tank with processed oil in front of a flame at Mexican state-owned petroleum company PEMEX refinery in Tula, Hidalgo state, Mexico [AFP]

Mexico's Senate opened a debate Tuesday on controversial legislation to break the country's oil monopoly by allowing foreign firms to drill for crude for the first time in 75 years.

The bill -- which has sparked demonstrations -- is the centerpiece of President Enrique Pena Nieto's sweeping reform drive, which has led to new laws in tax collection, telecommunications and education in an effort to revitalize Latin America's second biggest economy,

The latest reform would let private firms explore and extract oil and gas as well as share profits, production and risks with state-run energy giant Pemex, ending a ban cemented in the constitution.

The legislation was sent to the full Senate after three committees gave general approval in a 24-9 vote on Monday.

But leftist opponents vowed to fight what they see as a bid to privatize a symbol of national sovereignty. Protesters have held demonstrations outside the Senate for days.

The bill proposes a contract and licensing schemes that fall short of more controversial concessions.

But the left-wing Democratic Revolution Party (PRD) equates the plan to treason and submission to US oil companies.

PRD Senator Dolores Padierna sought to suspend the vote until Mexicans can hold a referendum on the reform, but the Senate committees rejected her proposal.

Supporters of the reform deny that the legislation would privatize the sector, insisting that the oil would remain the property of Mexico and that Pemex desperately needs it to reverse a drop in production.

Changes to the oil sector strike at the heart of modern Mexico's national identity.

In 1938 then president Lazaro Cardenas nationalized the foreign-operated oil industry, a wildly popular move that asserted Mexico's right to its own mineral wealth.

The government also founded Pemex, which despite its many problems remains one of the country's most important sources of income from exports.

The PRI and PAN say the reform is needed to reverse a downward trend in oil production, which has dropped from 3.4 million barrels per day in 2004 to 2.5 million bpd today.

But the two parties disagree on a PAN bid to oust the powerful union from the company's board.