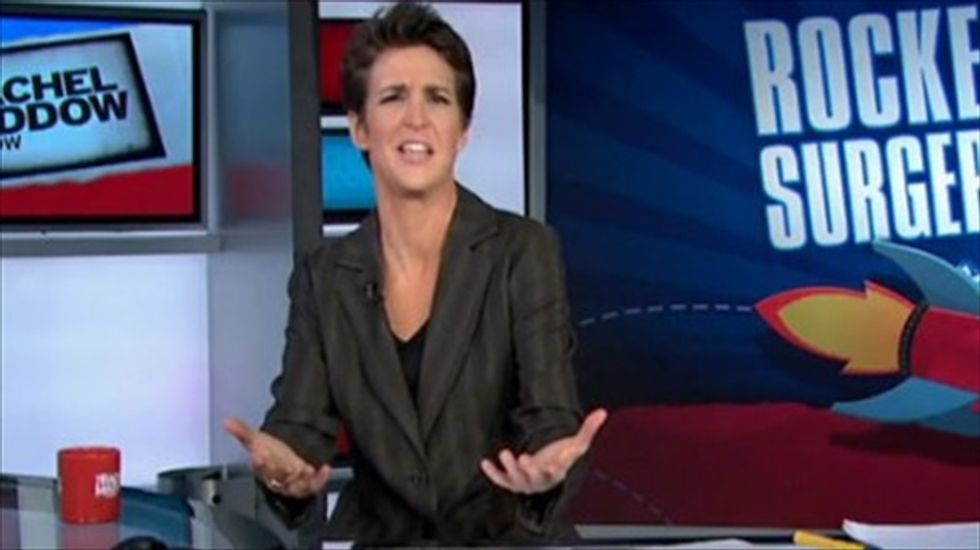 While MSNBC host Rachel Maddow conceded on Monday that it was a sound strategy for conservative billionaire activist Charles Koch to purchase influence over the hiring process at Florida State University (FSU), she still ripped state officials for letting it happen.

"Forget naming rights to the stadium, or whatever," Maddow said, explaining that Koch "purchased hiring rights for the faculty at Florida State's economics department. And yes, Florida State has the word 'state' in it because it is a public university, and yes, it is objectively insane that the state of Florida allowed that to happen."

As the Tampa Bay Times reported in 2011, a foundation funded by Koch gave $1.5 million to the school's economics department in 2008, in exchange for Koch having the power to select members of an "advisory committee" that screens prospective new hires. A year later, Koch reportedly rejected 60 percent of job candidates suggested by FSU faculty.

"You can see why Mr. Koch would want to do that sort of thing, if he could find a state crazy enough to let him do it," Maddow said. "I mean, $1.5 million is nothing to him. He loses that into a hankerchief when he sneezes. But for that pittance, he gets to make sure his conservative billionaire economic ideas get taught and published and propagated under the brand name of something that is supposed to look like a university-level education."

Koch and his brother, David, reportedly donated more than $30 million between 2007 and 2011 to groups cutting deals with more than 200 universities around the country, including the Catholic University of America. That agreement led to a group of Catholic officials calling for the university to forfeit the donation in the name of academic independence.

The Kochs' influence, it turned out, was also felt in a May 2013 study that ranked Wisconsin -- led by Koch ally Gov. Scott Walker (R) -- 15th in the country in "economic outlook," when other reports had it ranked closer to last.

Koch Companies confirmed to Maddow's show that a charitable trust controlled by the two billionaire siblings donated $150,000 toward the group behind the report, while denying it was specifically earmarked for its publication. The author subsequently denied the Kochs influenced his findings, saying, "This is not rocket surgery."

"Indeed, this is not rocket surgery," Maddow concurred. "But that is a very eloquent way of saying something important about the quality of the scholarship that you get when you buy your own scholarship."