Researchers: Neanderthals cared for and buried their elders 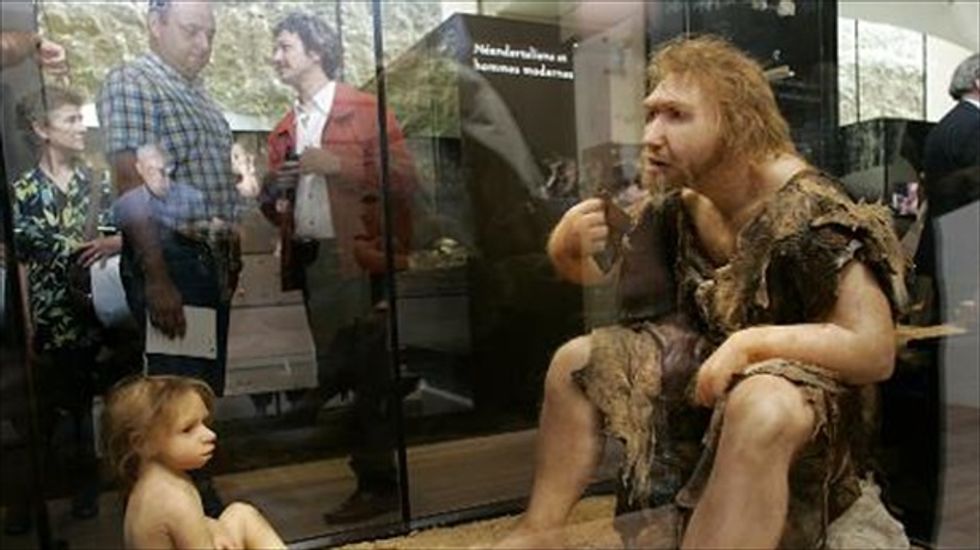 Visitors of the Museum for Prehistory in Eyzies-de-Tayac, France, look at a Neanderthal man ancestor's reconstruction on July 19, 2004 [AFP]

An old Neanderthal man who could barely walk and had lost his teeth was cared for by fellow cave people and then painstakingly buried after he died, researchers said Monday.

The latest findings are based on 13 years of research at an excavation site in central France, adding new evidence to the argument that cavemen were actually a sophisticated lot.

The burial pit at La Chapelle-aux-Saints was first found in 1908, containing the remains of a handicapped elder that gave rise to the popular legend of the dim-witted, hunched and shuffling Neanderthal man.

But over the years, a more careful analysis of his burial site, and the discovery of others elsewhere in Europe, suggested that Neanderthals had a greater capacity for reverence and caring than previously thought.

Researchers have now ruled out the possibility that the cave floor was a natural formation, indicating it must have been dug, said the report in the Proceedings of the National Academy of Sciences, a peer-reviewed US journal.

The remains of three more individuals have also been found near the old man, though it is unclear whether these two children and one adult were related to, or even the contemporaries of the 50,000-year-old buried elder, said lead researcher William Rendu.

The pit in which his bones lay was made of soft limestone and clay. In nature these rock formations are found horizontally, though the section under his body was nearly vertical.

"The pit does not have any natural origins, it doesn't fit with any natural phenomenon. The only other explanation is a human origin," said Rendu.

The latest round of excavation work began in 1999, and involved experts from the French National Center for Scientific Research, the PACEA laboratory of the University of Bordeaux and Archeosphere, a private research firm.

Just who the old man was remains a mystery, but researchers think he must have been an important person, at least to the group of Neanderthals with whom he lived.

Without workable teeth, others likely chewed food for him. His disabled right hip and several broken and fused vertebra indicate he could not move around on his own, said lead researcher William Rendu.

"He was able to live a long time, aided by other members of his group," he said.

Reindeer and bison bones were also found nearby, but the animal remains showed more signs of deterioration than the Neanderthal bones, indicating his remains were better protected.

"If they had wanted to just get rid of this man's body, they could have left it outdoors in nature, where carnivores would have quickly eaten it up," said Rendu.

"Instead they dug a hole more than a meter (yard) deep using the tools that they had, such as stone or wood or pieces of bone. They didn't have anything else," said Rendu.

While the good condition of the bones suggest he was rapidly interred, the packed sediment around gravesite took a long time to excavate, suggesting it took the man's circle quite some effort to dig it and pack the Earth in around the body, Rendu said.

"All this shows that they took a long time to do something that was not essential to their survival but simply to protect the body of this man," said Rendu.

"This group of Neanderthals showed a high level of conscience for others," he added.

The cause of the man's injuries has been a source of debate over the years, and some experts have questioned whether the burial was truly intentional.

Rendu said that if this disabled elder was revered by his people, he may not have been the only one.

"He is the only one who has appeared to us so far."