These boots are made for twerking

Thanksgiving was, what, like four days ago? But that doesn't mean that dimwitted Fox pecksniff Todd Starnes isn't  still all Concerned-Mom-Is-Concerned because the Macy's Thanksgiving Day Parade was defiled by a bunch of tapdancing transvestites and it's getting so that kids can't even watch a damn parade these days without getting homo-genitalized. Under the bizarre headline:

...which is weird because twerking would be totally wasted on Spongebob and also a sponge don't need no Miley Cyrus sexing him up for birthing no spongebabies because:

Sponges have evolved the ability to mate as either a female or a male, increasing their odds for success. When it comes time to mate, one sponge assumes a female role, while the other plays the role of a male. Throughout their lifetime, sponges are capable of playing both the female and male role.

But never mind that (although I am sure you will somehow insert that little tidbit into a conversation at work today. You're welcome) because Starnes is just getting started being tumescent with fauxrage about them Kinky Boots:

Boys and girls across the fruited plain [PIF: Ha! I see what you did there] were exposed to drag queens prancing about in Kinky Boots during the Macy’s Thanksgiving Day Parade, leaving moms and dads to explain to their children why grown men were dressed like women.

The drag queens were cast members of the hit Broadway musical “Kinky Boots.” They were decked out in full drag along with thigh-high, red stiletto boots – performing a song from the Tony Award winning show at the start of the parade.

Okay. Fine.  Let's hear from the common sense moms and dads who are just trying to raise little Dakota and little Ruger Jean as Godly Creatures just the way God intended them to be although God also created gender confusion because He is droll and playful that way:

“You’ve completely removed the family part of Thanksgiving,” wrote one critic on the department store’s website (and reposted by the New York Post). “Absolutely disgusting.”

“In the words of my 10-year-old, ‘well, that was inappropriate,’” one mom wrote.

“I’m sending Macy’s an email to tell them to keep their agenda out of the parade,” another parent wrote. “We will no longer watch the parade and that’s sad because it’s been a tradition in my family for years.”

“There is a time and place to push an agenda and the Thanksgiving parade isn’t it,” one dad wrote. “This will no longer be a part of our family tradition. I shouldn’t have to monitor the stinking parade. My boys are asking me, ‘Are those boys?’”

Also here  is a Momblogger, who are the worst people on earth after Nazis and Scott Stapp, weighing in:

Theresa Walsh Giarrusso is the author of the Atlanta Journal-Constitution’s “Momania: A Blog for Busy Moms.”

She asked readers to weigh in on how they handled the “Kinky Boots” performance.

“At my house, the girls got quiet when it came on,” she wrote. “I think Rose commented about one of the ‘women.’ She knew ‘she’ looked different. And I said, ‘Rose, that’s a man. They’re dressing as women.’”

Because nobody has ever seem a man dress as a woman on teevee ever.

Giarrusso said the resulting discussion was good, “but it was NOT one I was expecting to have on Thanksgiving morning watching a parade.”

Oh oh. Looks like someone is going to be getting a visit from Child Protective Services for being a Godless pervmom and not blinding her children with lye because of What They Have Seen. Unclean. Unclean!

So let me get this straight – wearing lady’s unmentionables makes you more tolerant?

No. It makes you feel pretty.

Nope. But you know what does makes you an  "intolerant, inhumane, homophobic bigot"?

By being a kneejerk fearmongering intolerant, inhumane, homophobic bigot. 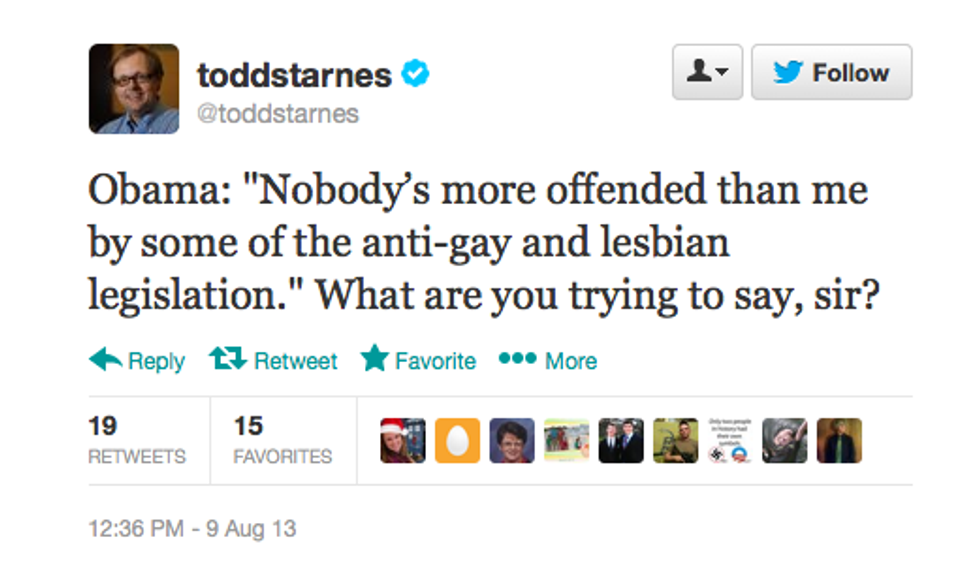