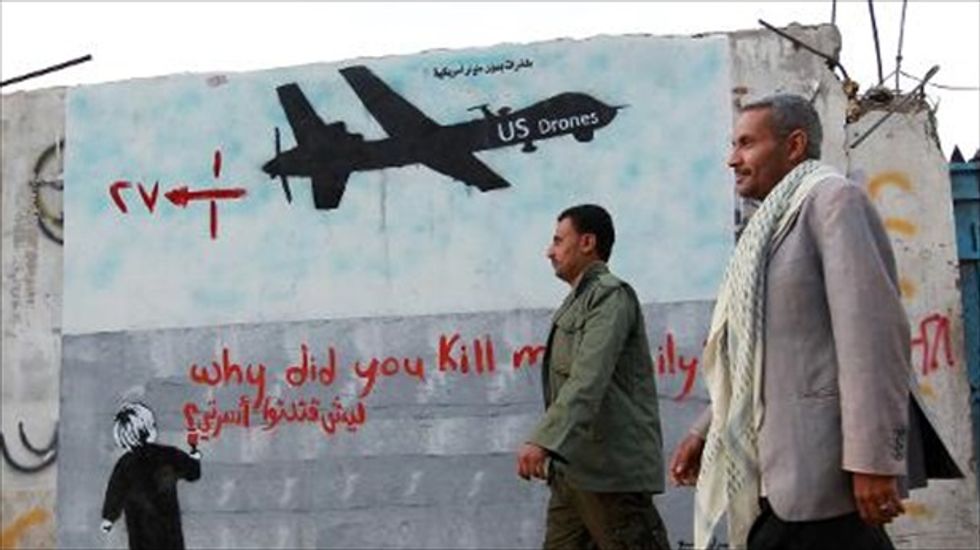 Yemeni men walk past a mural depicting a US drone and reading 'Why did you kill my family,' on Dec. 13, 2013 in the capital, Sanaa [AFP]

Yemen's parliament has voted for a ban on drone strikes, but experts said Monday lawmakers have limited powers and their vote is unlikely to impact Washington's bid to crush Al-Qaeda militants.

The United States operates all unmanned aircraft flying over Yemen in support of Sanaa's attempts to break Al-Qaeda, and intensified strikes this year have killed dozens of militants.

Yemen is home to Al-Qaeda in the Arabian Peninsula, which Washington views as the deadliest franchise of the global jihadist network.

Critics say drone strikes kill civilians and have demanded an end to the secrecy surrounding them.

Yemen's parliament, which is dominated by the party of ousted president Ali Abdullah Saleh and the Islamist Islah party, voted on Sunday in favour of halting drone attacks.

"The parliament appears to be giving orders to authorities, when it has lost its credibility long time ago," said political analyst Abdelbari Tahar.

A Yemeni political official speaking on condition of anonymity said the vote is a "challenge" to interim President Abdrabuh Mansur Hadi who took over when Saleh agreed to step down in 2012 after a year of protests against his 33-year rule.

"This vote appears to be an attempt by the followers of the former president to put pressure on Hadi, more than it is a real legislative action," the official said.

"It is a kind of challenge to Hadi," who has cemented Sanaa's partnership with Washington in the fight against Al-Qaeda.

"The government could ignore this vote without any consequences to worry about," said the official.

The current assembly was elected in 2003 when Saleh was in power and its five-year tenure was extended by two years in a political compromise. It has not been renewed since then.

Saleh has been accused of trying to hinder the political transition process, which began with him quitting in February 2012, following massive protests against his rule.

MP Ali al-Mamari said the motion was a "request to the government," insisting it was not a law banning drone use.

He said parliament has also demanded the government address parliament "to explain whether or not it can implement this (ban on drones)."

On Thursday a drone attack in Rada in the central province of Bayda hit a wedding motorcade, killing 17 people, mostly civilians, and triggering protests by tribesmen in the lawless area.

The Supreme Security Committee, headed by Hadi, insisted that the strike had targeted the car of an Al-Qaeda leader.

Amnesty International said confusion over who was behind the raid "exposes a serious lack of accountability for scores of civilian deaths in the country."

"Even if it turns out that this was a case of killing based on mistaken identity or dodgy intelligence, whoever was responsible needs to own up to the error and come clean about what happened in this incident," said Amnesty's Philip Luther.

Two of the dead whose names were released -- Saleh al-Tays and Abdullah al-Tays -- had figured on Yemeni government lists of wanted Al-Qaeda suspects in the past.

But most of those killed were civilians of the Al-Tays and Al-Ameri clans -- part of the large and heavily armed Qayfah tribe.

A report by Human Rights Watch in October said the US has carried out 80 targeted operations in Yemen since 2009, including strikes from drones, warplanes and cruise missiles, killing at least 473 people.

The US says drone attacks are an important and effective tool against jihadists from the AQAP.