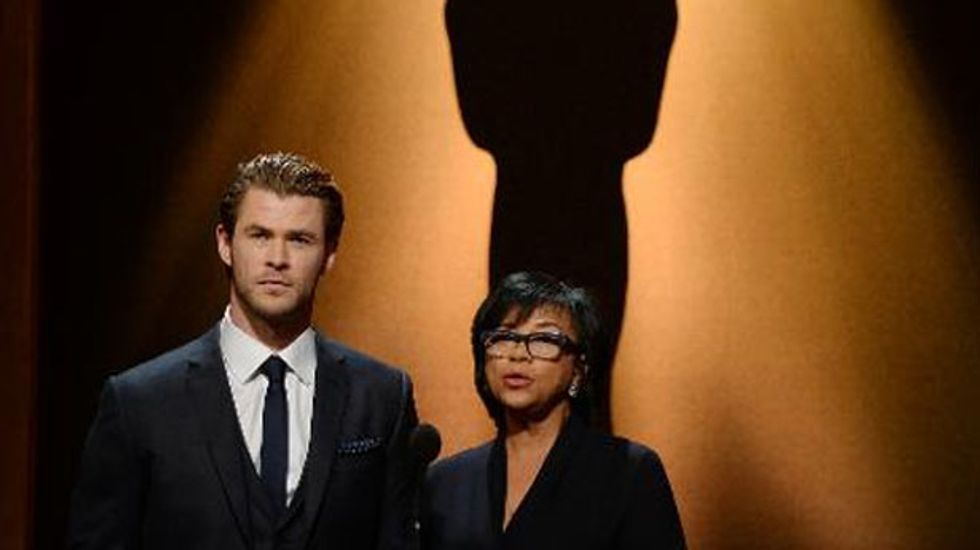 Historical drama "12 Years a Slave" was close behind with nine nominations in a year chock full of critically acclaimed movies, leaving no clear frontrunners ahead of the Academy Awards on March 2.

"Hustle," "Gravity" and "Slave" were among nine movies nominated for the best picture Oscar, along with "Captain Phillips," "Dallas Buyers Club," "Her," "Nebraska," "Philomena," and "The Wolf of Wall Street."

Under recently changed rules, the best picture category can include between five and 10 films. The fact that nine are in the race this year underlines the strength of the competition.

Somali pirate drama "Captain Phillips," AIDS activist film "Dallas Buyers Club" and black and white road movie "Nebraska" were next with six Oscar nods each, according to a list released by the Academy of Motion Picture Arts and Sciences.

Martin Scorsese's epic about financial greed "The Wolf of Wall Street" and futuristic love story "Her" each got five nominations, which were announced in a pre-dawn ceremony in Beverly Hills.

But there were also snubs: two-time Oscar winner Tom Hanks failed to win a nomination for his roles in "Captain Phillips" or "Saving Mr Banks," while awards season perennials Ethan and Joel Coen got only two nods for "Inside Llewyn Davis" -- neither of them in the main categories.

Veteran actor Robert Redford also did not make the best actor shortlist for his powerful solo performance in shipwreck movie "All is Lost."

For best actor, the nominees were Christian Bale for "American Hustle," Bruce Dern for "Nebraska," Leonardo DiCaprio for "The Wolf of Wall Street," Chiwetel Ejiofor for "12 Years a Slave" and Matthew McConaughey for "Dallas Buyers Club."

Both DiCaprio and McConaughey won Golden Globes for their performances. At the Globes, the main acting prizes are split between drama and musical/comedy films.

Up for the best actress Oscar are Amy Adams for "American Hustle," Cate Blanchett for "Blue Jasmine," Sandra Bullock for "Gravity," Judi Dench for "Philomena" and Meryl Streep for "August: Osage County."

Nominated for best director were David O. Russell for "American Hustle," Alfonso Cuaron for "Gravity," Alexander Payne for "Nebraska," Briton Steve McQueen for "12 Years a Slave" and Scorsese for "The Wolf of Wall Street."

Jennifer Lawrence, who won the best supporting actress Globe at the weekend, is likely a frontrunner in the same category at the Oscars.

For best supporting actor, the nominees are Barkhad Abdi for "Captain Phillips," Bradley Cooper for "American Hustle," Michael Fassbender for "12 Years a Slave," Jonah Hill for "The Wolf of Wall Street" and Jared Leto for "Dallas Buyers Club."

The 42-year-old Leto, who had not made a movie for six years, won the Globe and has earned widespread praise for his searing performance in a transgender role.

The five contenders for best animated picture are Disney's fairy tale musical "Frozen," which won the Golden Globe. It is up against "The Croods," "Despicable Me 2," "Ernest & Celestine" and Japanese historical fantasy "The Wind Rises."

The best foreign language film nominees include Italy's "The Great Beauty," which won the Globe. It is up against "The Broken Circle Breakdown" from Belgium, Denmark's "The Hunt," Cambodia's "The Missing Picture" and Palestine's "Omar."

Although the Oscars and the Globes are Hollywood's two most high-profile awards shows, the voters who choose the Globes could hardly be more different from those who select the Oscar nominees, and winners.

The Globes-organizing Hollywood Foreign Press Association (HFPA) comprises about 80 non-US journalists. The Academy, by contrast, has some 6,000 voting members who are industry professionals specialized in a variety of branches.