At least 6 killed as Muslim Brotherhood supporters rally in Egypt 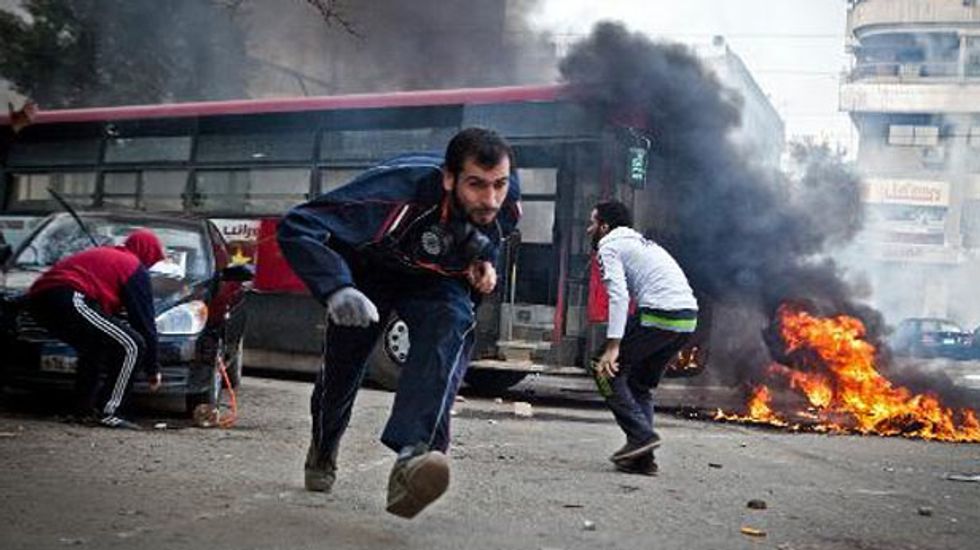 The protests came after an Islamist alliance that backs Morsi called for demonstrations ahead of a new hearing on Wednesday in a trial against the ousted president.

Three people were killed in Cairo, and three others in the cities of Ismailiya, Fayoum and Alexandria, as the Islamist protesters fought with police and civilian opponents, said the health ministry.

At least 42 people were wounded in the violence, it said.

In the upscale neighbourhood of Maadi, police fired tear gas near a military hospital as protesters threw fireworks at them, an AFP reporter said.

He said protesters clashed with the police on a road along the Nile river and also inside the suburb.

The street was littered with rocks and burning wood as police vehicles sped up and down the road to disperse the protesters.

The demonstrators regrouped in a side street, facing off with riot police and chanting "They are the thugs!"

In an eastern neighbourhood of Cairo, police also used tear gas against thousands of Morsi supporters who burnt tyres and threw fireworks at security forces, another AFP correspondent said.

Protesters chanted "Down with military rule" and slogans against army chief Abdel Fattah al-Sissi, who led Morsi's ouster in July.

They included Tahrir Square, as well as Rabaa al-Adawiya and Nahda squares, which were the sites of a bloody crackdown on Morsi's supporters in August.

State news agency MENA reported a number were wounded by birdshot in clashes in Alexandria and that Morsi supporters torched two civilian cars.

Since the Islamist president's ouster, his supporters have staged near-daily protests calling for his reinstatement, particularly after Friday prayers.

But their numbers have dwindled amid a violent government crackdown.

More than 1,000 people, mostly Islamists, died in street clashes following his overthrow, and thousands have been imprisoned.

Friday's protests come as a pro-Morsi Islamist coalition spearheading the protest movement called for demonstrations ahead of the resumption of his trial on Wednesday.

Morsi is being tried on charges of inciting the killings of protesters during his presidency.

He will also stand trial on January 28 over a jailbreak during the 2011 popular uprising that toppled long-time ruler Hosni Mubarak.

A date for him to be tried on espionage charges has yet to be fixed.

The Brotherhood denied the accusation, and an Al-Qaeda-inspired group claimed responsibility for the bombing.

The designation carries harsh penalties for offenders, including possible death sentences for the movement's convicted leaders and five-year jail terms for protesters.

Promoting the Brotherhood either in writing or verbally can also lead to prison sentences.

"We are not afraid, we love Egypt and what we are doing is for Egypt," said protester Mohamed Dahi, 39, as he distributed leaflets calling for the boycott of a referendum on a new constitution to be held later this month.

"I am against all injustice and the military rule. I won't accept any military rule in Egypt," he told AFP as he participated in a protest along with his 10-year-old son.