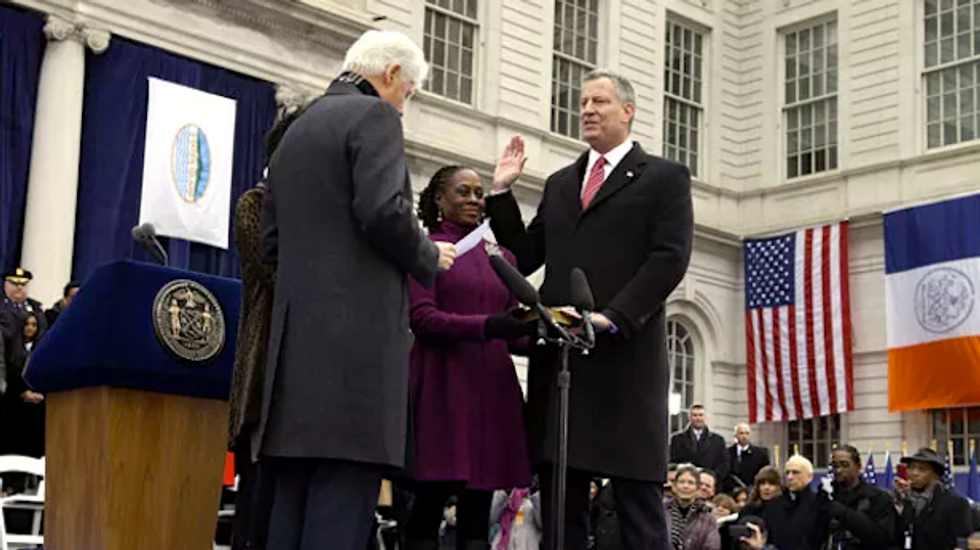 De Blasio, 52, who in November won a landslide election to become New York’s first Democratic mayor in 20 years, took the oath of office one minute after midnight during a ceremony in front of his Brooklyn home, flanked by his wife, Chirlane, and their two teenaged children.

“This is the beginning of a road we will travel together,” he told a few dozen supporters gathered outside his home, during a short speech ahead of a formal swearing in ceremony later Wednesday.

The modest oath swearing ceremony was in stark contrast with the inauguration for his predecessor, Michael Bloomberg, who in 2002 was sworn in in Times Square just after midnight amid confetti and a massive swarm of revelers.

More than a decade later, the brash billionaire concluded his 12-year reign Tuesday, ending an era that heralded major changes for America’s largest city, but that also deepened the schism between rich and poor.

The New York mayor’s nighttime oath traditionally is followed by a midday affair on the steps of City Hall.

De Blasio worked for the Clinton administration during his days in the Department of Housing and Urban Development.

Also attending was the former president’s wife, Hillary Clinton, tipped by politicos as a 2016 presidential favorite.

He was sworn in using a Bible that once belonged to former US president Franklin D. Roosevelt, the architect of America’s New Deal reforms that provided a safety net for Americans suffering during the Depression.

A staunch liberal, De Blasio has emphasized his desire to establish a progressive administration.

“It is exciting and it is humbling, I served this city in a variety of ways for a long time,” De Blasio said at a Tuesday press conference. “I feel the enormity of the task but I also feel a real sense of familiarity with that that lies ahead,” he said.

The visibility of his African-American wife and biracial children helped the public advocate connected to middle-class families and the city’s diverse electorate.

The new mayor was swept into office on Nov. 5 with an impressive 73 percent vote, a testament to New Yorkers’ desire for change after 12 years of Bloomberg.

During Bloomberg’s three terms, the city became safer, greener and healthier, but critics were quick to peg the finance-sector billionaire as a politician for the wealthy in a city with the country’s largest inequality gap.

New York counts nearly 400,000 millionaires and 3,000 multi-millionaires among its ranks, while 21.2 percent of the population lives below the poverty line.

De Blasio denounced Tuesday what he said had become two cities, and supported a $10 minimum hourly wage, even as New York state saw its minimum wage rise to $8 Wednesday.

He also promised to implement a higher tax on New Yorkers earning more than $500,000 a year, in an attempt to expand preschool programs.

De Blasio has created high hopes among the city’s Hispanic and black populations, which respectively account for 28.6 percent and 25.5 percent of the city’s 8.3 million inhabitants.