Egyptian military keeps an eye on referendum for a new constitution 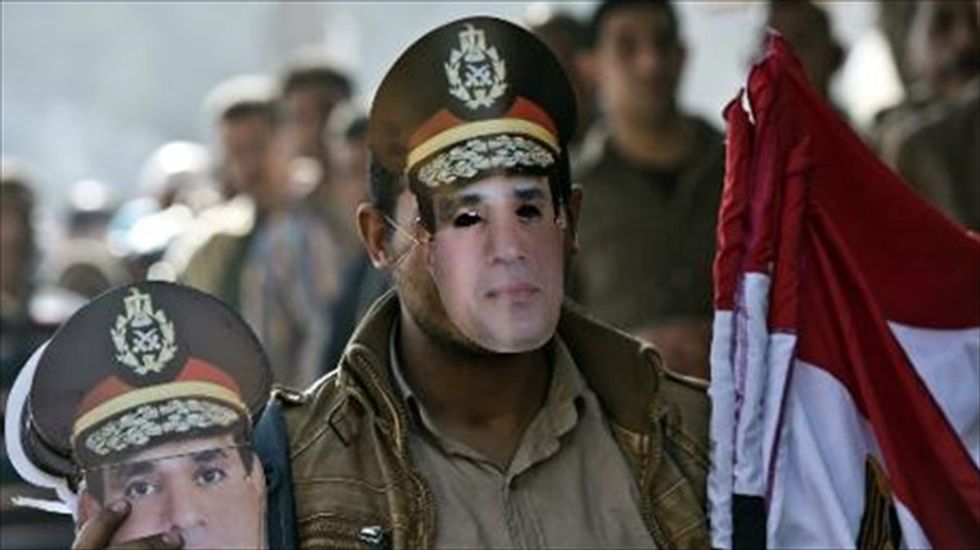 Egypt on Wednesday wrapped up a two-day referendum on a new constitution that could set up a presidential bid by the army chief who toppled Islamist president Mohamed Morsi.

There was little doubt the vote would back the new charter, which the military-installed authorities say provides greater protection for freedom of speech and women's rights, as the Islamist opposition called a boycott.

Initial tallies reported by state media suggested at least 90 percent of voters approved the constitution, but the turnout remained unclear.

The early results were based on initial counts by returning officers. The official results will be announced within 72 hours.

Officials have said that army chief Abdel Fattah al-Sisi, who toppled Morsi in July, will closely monitor turnout as he mulls standing for the presidency himself in an election promised for later this year.

The military's spokesman thanked the "masses" of voters for taking part in what he called the "heroic battle of the referendum", in a statement after polling stations closed.

Sisi, reviled by Morsi's supporters, has said he is prepared to run for president, if there is enough popular support, and the referendum provides the first concrete test.

Dozens of Morsi supporters blocked a metro station in a Cairo suburb, security officials said, but there were no reports of disruption to polling on Wednesday.

On Tuesday, sporadic clashes between Morsi supporters and their opponents and police left at least nine people dead.

The government said it was aiming for a larger turnout than the 33 percent of the country's 53 million registered voters who cast a ballot in a constitutional referendum under Morsi in 2012, with 64 percent voting yes.

The new text has done away with much of the Islamist-inspired wording of Morsi's charter. It bolsters the military's powers and allows it to try civilians for attacks on the armed forces.

Morsi's Brotherhood was designated a terrorist group by the military-installed authorities as part of their crackdown on the movement that dominated all previous polls since the ouster of long-time ruler Hosni Mubarak in early 2011.

At least 444 people were arrested for protesting and disrupting polling over the two-day bote, the interior ministry said in a statement.

US Secretary of State John Kerry said he hoped the referendum would be "transparent and accountable".

"But we don't know yet," he told reporters in Kuwait.

On Tuesday, State Department deputy spokeswoman Marie Harf said that a bill Congress is expected to pass on Friday will allow the White House to unfreeze all $1.5 billion (1.1 billion euros) in US aid if it can certify that Egypt "has held a constitutional referendum, and is taking steps to support a democratic transition".

"Yes, even if criminals hate it," said a front page headline in Al-Wafd, a private daily, referring disparagingly to supporters of Morsi.

The government hopes a large turnout in favour of the new constitution will bolster its disputed authority, while army chief Sisi will monitor it for an "indicator" of his popularity, an official close to the general said.

Interim president Adly Mansour's government has pledged the referendum will be followed by parliamentary and presidential elections.

Backers of the charter are hoping it will garner the support of at least 70 percent of votes cast.

"We trusted the Muslim Brotherhood and agreed on their constitution, their government, their parliament... but they cheated us," said Jihan Abdel Aziz, as she waited outside a Cairo polling station to cast her vote on Wednesday.

"We are now voting for this constitution to get us out of this crisis."

But Amr Desoki, an Egyptian student who said he was not a member of the Muslim Brotherhood, told AFP that he was boycotting the referendum.

"This constitution or whatever this farce is going on these days... I am boycotting it... The constitution to me is illegitimate and I don't recognise it."

State media gave no indication of what turnout had been so far, and there was no official announcement.