Kiev turns into battlezone as police clash with radical protesters 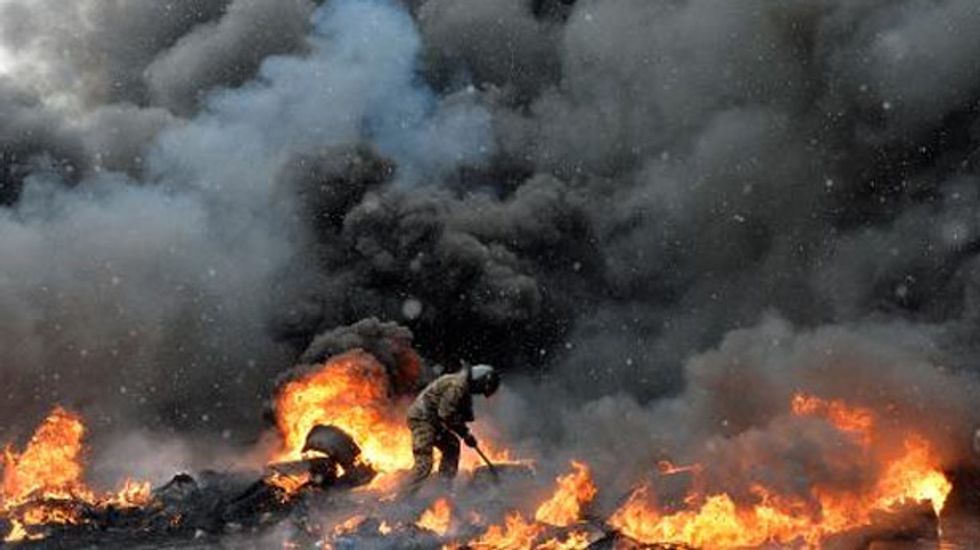 Shrouded in smoke and tear gas and echoing with the din of stun grenades and drums, the centre of Kiev turned into a battle zone amid brutal clashes between security forces and protesters.

Police launched the first assault against stone-throwing protesters in the morning, marching forwards as a military formation clad in body armour with their shields in front.

Protesters stepped up their attacks, flinging stones and Molotov cocktails but could do little against the tear gas and stun grenades used by the elite Berkut riot police who also fired rubber bullets.

Hundreds of hardcore protesters regrouped after being pushed from the main scene of the clashes, burning tyres in a bid to create a new barricade and filling the air with rancid black smoke.

Further raising the stakes, police then moved an armoured personnel carrier into the protest zone.

The capital, which successfully hosted the final of the Euro 2012 football championships, was turned into a virtual war zone as demonstrators scattered, chased by security forces.

The street cafes on Kiev's famed Khreshchatyk Avenue nearby were all closed as the clashes intensified.

January 22 is supposed to be the country's day of national unity, remembering the unification of western and eastern Ukraine in an attempt at independence during the turbulence of 1919.

However Ukrainians seemed less unified than ever amid the carnage on the street with the mainstream opposition leaders apparently having lost any authority over the most radical protesters.

Two protesters were confirmed shot dead in the morning but the casualty toll risks rising after ambulances rushed injured activists to treatment.

The clashes were restricted to an area in the centre of the capital centred on Grushevsky Street, the scene of three days of violence that have raised tensions from two months of protests to a new peak.

So far, the security forces have not moved against the main protest camp on Independence Square in Kiev, known locally as the Maidan.

'Our future is in front of us'

"We are here to protect the Maidan. Our children are behind us. Our future is in front of us," said protester Bogdan Shkur, 50.

Following rumours that a police move against the centre of the clashes was imminent, many of the protesters were wearing protective armour and even flak jackets.

They had also tried to match the riot shields of the police by manufacturing their own shields out of scrap metal.

The streets were turned dark by the soot from burning wreckage mixed with the white of the snow falling on a freezing cold day that is likely to be remembered in Ukraine forever.

Ukrainians have until now always boasted that the country, for all its problems, had no inclination for violence and the 2004 Orange Revolution succeeded without even a single window being broken.

But this illusion has now been shattered.

In a change from the last weeks of the protest, the hard core fighting the security forces do not appear linked to any political party, not even the ultra-nationalist group Svoboda (Freedom).

They have been linked to a little known group called "Right Sector" which has organised its actions on the Internet.

The protesters have been particularly outraged by parliament's adoption last week of new anti-protest laws, which make most forms of public protest illegal and ban the wearing of helmets by protesters and driving in a convoy of more than five cars.