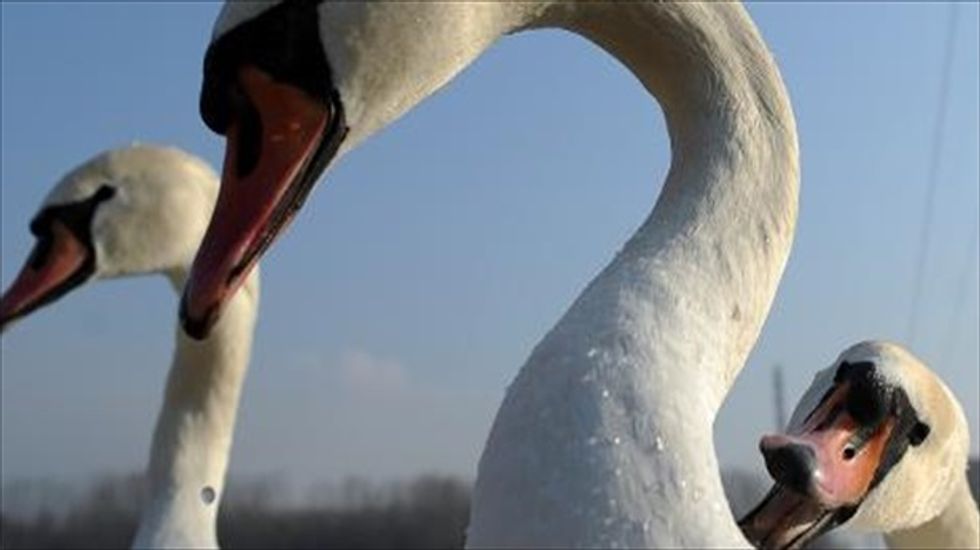 Swans are pictured on a lake in Slovakia [AFP]

In Britain, wild swans may be prized for their beauty and protected by the Queen, but the US state of New York has declared war on them, branding them a violent menace.

Draft proposals to kill or resettle the state's 2,200 wild mute swans by 2025 may be supported by some conservationists but have sparked uproar among animal rights activists.

Mute swans were brought to North America by European settlers to adorn their estates in the late 1800s but the authorities no longer consider them a beauty worthy of roaming free.

Ever since US Airways flight 1549 collided with a flock of geese in 2009 and landed on the Hudson river, the US Department of Agriculture has set about annually culling Canada geese.

Now the New York state conservation department wants to expand the offensive and eliminate free-ranging mute swans by 2025, killing them or allowing "responsible ownership" of the birds in captivity.

"Lethal control methods will include shooting of free-ranging swans and live capture and euthanasia in accordance with established guidelines for wildlife," said the draft proposal.

Nests would also be destroyed, and eggs oiled, punctured or sterilized to prevent hatching, it added.

Pressure group Goose Watch NYC, which was set up to protest against the geese culls, demanded the plan be scrapped.

"It's just outrageous to try to exterminate an entire species that has been living in the state for more than 150 years, almost 200 years," Watch founder David Karopkin told AFP.

He rubbished the idea that 2,200 swans posed a threat to a state of 18 million people.

"I've yet to find anyone who has been seriously injured by a mute swan," he said.

"When they're being aggressive it's often in relation to them protecting their nest, their babies. I mean people need to have some common sense," he added.

But some conservationists happily support the state plan.

Paul Curtis, associate professor in the department of natural resources of Cornell University, told AFP that it was appropriate and in keeping with proposals in other states.

There have been four documented swan strikes at JFK airport, he said. Swans can pose a nuisance and they deplete food sources.

"The goal is to limit population growth in the wild, and remove swans from places where they cause problems or do damage to plant communities," he wrote in an email.

"The plan could be effective if a variety of lethal and non-lethal approaches are used," he added.

The state conservation department also hit back against critics, telling AFP the proposal to resettle the swans make it "more balanced and comprehensive" than many have suggested.