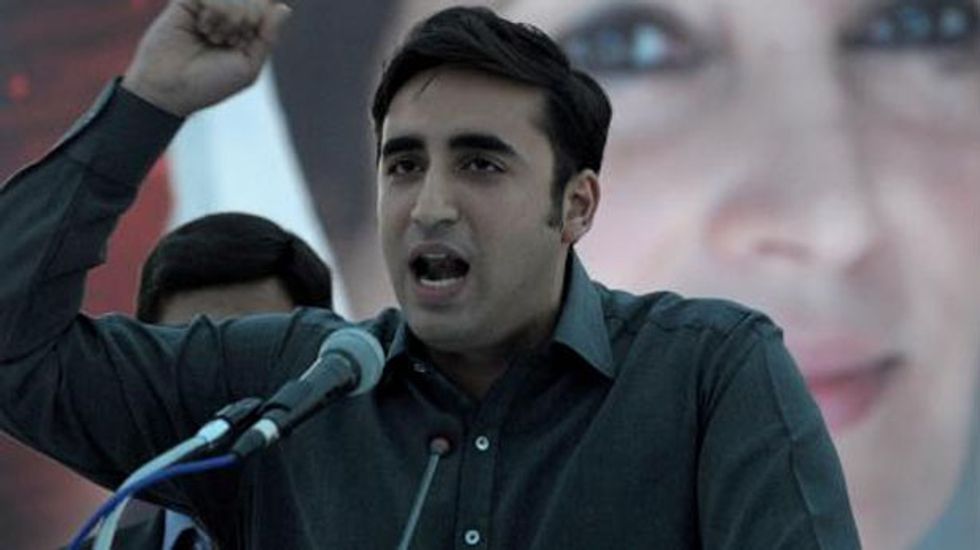 A festival to commemorate Pakistan's cultural heritage spearheaded by the scion of the Bhutto family could put the ruins of one of the world's ancient civilisations at risk, experts warned Thursday.

Bilawal Bhutto Zardari, the heir to slain former prime minister Benazir Bhutto, has launched a campaign to conserve the heritage of his home province of Sindh with a two-week festival due to begin on February 1.

Zardari's Pakistan People's Party suffered a heavy defeat in the 2013 general election and observers say the event, which has seen weeks of national television spots, is partly aimed at raising the 25-year-old's political profile.

But experts told AFP the festival's inaugural ceremony which is to be held on the ruins of the Moenjodaro settlement could endanger the UNESCO World Heritage site built around 2600 BCE.

Large wooden and steel scaffolding is being erected over and around the ruins, while heavy spotlights and lasers have been installed for a light show.

Farzand Masih, head of the Department of Archaeology at Punjab University, said such activity was banned under the Antiquity Act.

"You cannot even hammer a nail at an archaeological site," he said.

"The laser and spotlights, secondly, will cause rapid decay at the site which is already exposed to many negative factors," Masih added.

"I was invited for the ceremony by Mr Bilawal Bhutto Zardari but I don't approve of such kind of activity."

The ruins, discovered in 1922 by British archaeologist Sir John Marshall, are 425 kilometres (265 miles) north of the port city of Karachi and are one of the largest settlements of the Indus Valley Civilisation.

"This is really a matter of great concern that we treat our precious heritage so recklessly," said Nauman Ahmed, a professor of architecture and urban planning.

"And when we need technical or financial assistance for conservation we have to face embarrassment from the donors for such acts," he added.

Qasim Ali Qasim, head of the Sindh Archaeology Department that is responsible for the ruins, denied any damage was being done.

"I don't think that the structure or lights would harm the site," he said.

"I am personally overseeing the work and it is all in accordance with the SOPs (Standard Operating Procedures)."

Responding to the criticism, Zardari tweeted: "inspected MD site with Director Archaeology (30yrs experience). Explained how every precaution has been taken. Remains are safe. More soon."

Sindh's High Court later agreed to hear a case filed by lawyer Qazi Ali Azhar that seeks to bar the government from building on the site.

Unless "extreme care" is taken in making arrangements for the show, the site may be damaged amd this would a "great national tragedy", said the short order from the court's Chief Justice Syed Maqbool Baqir.

The Moenjodaro ruins are one of Pakistan's six UNESCO World Heritage sites that are deemed places of special cultural significance.

But many of the country's historical sites are endangered by vandalism and urban encroachment, as well as a booming trade in illegally excavated treasures.