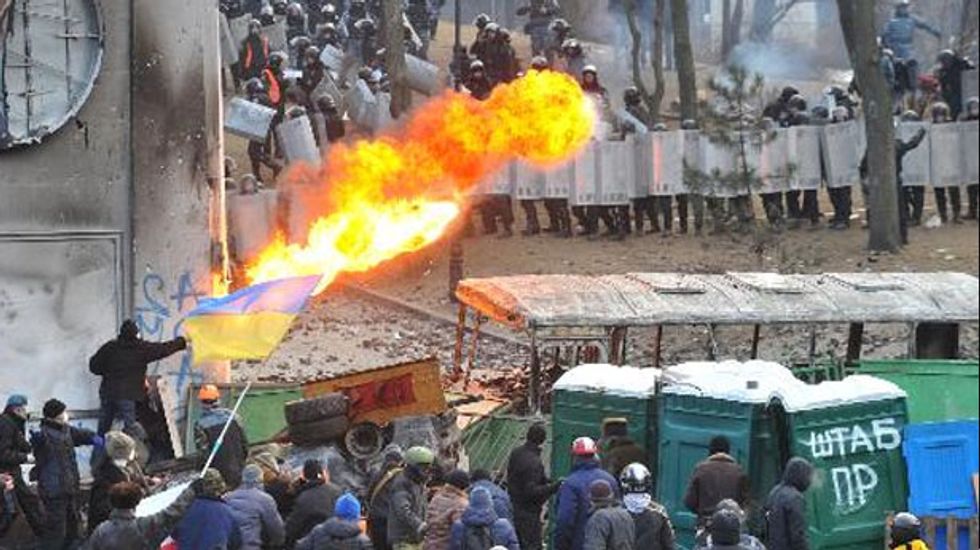 In normal times, Grushevsky Street is one of the nicest avenues in Ukraine's capital Kiev. But now its cobble stones have been ripped out by demonstrators to use as weapons in their standoff with police.

Separated by twenty metres (yards) of no-man's land and protected by metres-high barricades, protesters and the Ukranian security forces are engaged in a pitched battle that has turned an area in the centre of Kiev into a virtual warzone.

The protesters protect themselves behind barricades built around the burned-out wrecks of police buses torched on Sunday night.

Police stand on the upper part of Grushevsky street, forming several lines and covering themselves with their riot shields.

The clashes of the last two days have devastated a central area of the city, with one of the streets littered with used stun grenades and the wreckage of buses burned by the protesters.

The violence has shredded the years of peace that the wide boulevards of the capital had known following Ukraine's momentous 2004 Orange Revolution.

Near the recent battle scene is one of the most famous landmarks of Kiev: the stadium of the Dynamo Kiev football side named after the great Soviet and Ukrainian football coach Valeriy Lobanovsky.

On Monday some protesters managed to climb atop the stadium gate, pelting the police below with Molotov cocktails.

"We are going to stay here until our demands are met on the annulment of the laws" restricting rallies, said one demonstrator, Yaroslav Putilin, 46.

Protesters equipped themselves with ad hoc shields made of metal sheeting and wooden sticks in anticipation of further clashes with police.

Some even built a giant catapult to allow them to fling heavier rocks at the security forces.

The area echoed with the thud of stun grenades and the deafening drumming of groups of mostly elderly protesters with sticks on metal.

At one point, heavily armed riot police entered the no man's land area between the barricades to hurl the stones thrown by demonstrators back up them.

They also hurled stun grenades and on occasion used tear gas and rubber bullets against the protesters.

But this did not discourage the most radical Ukranians who hid right behind the barricades and emerged occasionally to lob projectiles at the security forces.

Dozens of police buses appeared behind the main contingent of the riot police Monday evening, raising the prospect they could try and boost their numbers and oust the protesters.

In a stark warning, prosecutor general Viktor Pshonka declared that the mass riots were a "crime against the state".

The main protest hub remains on Independence Square some five minutes walk away from the scene of the clashes.

The square and the adjacent Khreshchatyk street are now covered in tents erected by protesters. The smell of the smoke from the wood used to heat them hangs heavy in the air.

Away from the main protest hub however, life in Kiev is still continuing relatively normally, with shops and businesses still working.