'Polar vortex' descends -- the freeze is on 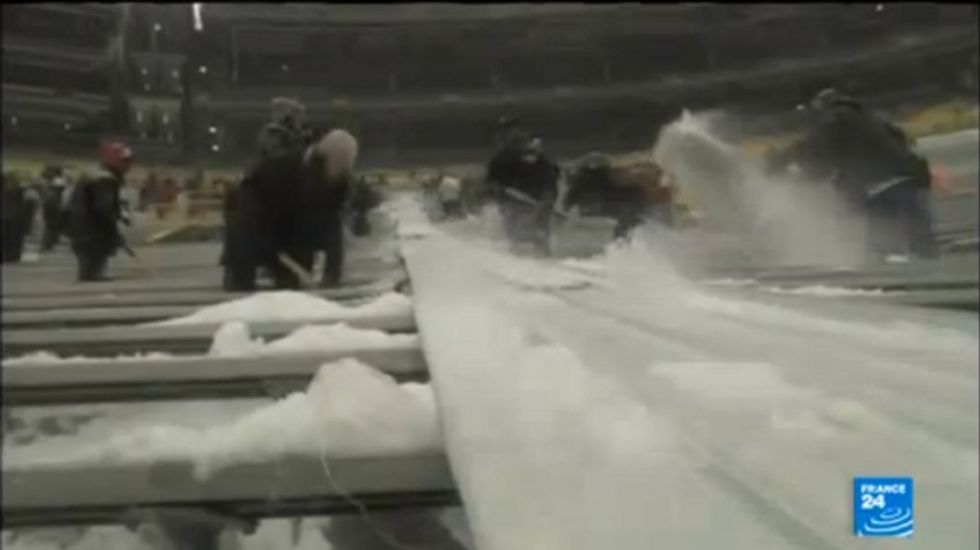 Much of the United States’ Midwest was braced on Sunday for a blast of Arctic air that could bring some of the coldest temperatures in two decades before heading to the Northeast.

A so-called “polar vortex” will affect more than half of the continental US over the next couple of days, with wind chill warnings stretching from Montana to Alabama. Weather services have forecast temperatures as cold as 25 below zero Fahrenheit (31 below zero Celsius) in Fargo, North Dakota, minus 31 F (minus 35 C) in International Falls, Minnesota, and 15 below F (26 below C) in Indianapolis and Chicago.

The bitter temperatures had already descended on a number of northern states Sunday morning. The National Weather Service reported a temperature of 9 below zero F (23 below zero C) in Bismarck, North Dakota, and negative 21 F (negative 29.5 C) at Duluth, Minnesota. At the height of the cold, wind chills may reach 50, 60 or even 70 below zero (45.5, 51 or even 56.7 below zero C).

Snow preceded the polar air and was expected to fall throughout much of Sunday from Michigan to Kentucky. Forecasts predicted up to a foot (30 centimeters) in eastern Missouri and parts of central Illinois, several inches (centimeters) in western Tennessee, and 1 to 3 inches (2.5 to 7.5 centimeters) in Kentucky.

The severe weather already created travel problems Sunday morning. In New York City, a plane from Toronto landed at Kennedy International Airport and then slid into snow on a taxiway. No injuries were reported, but the airport temporarily suspended operations for domestic and international flights because of icy runways.

In Missouri, the state Department of Transportation warned that most major roadways were covered in snow, but that it was too cold for rock salt to be effective. Fierce winds had also created whiteout conditions.

“If it gets to the point where it’s no longer safe, we will consider suspending operations,” said MoDOT spokeswoman Marie Elliott.

It hasn't been this cold for almost two decades in many parts of the US. Because of that, medical experts are reminding people that frostbite and hypothermia can set in quickly at 15 to 30 below zero F (26 to 34.4 below zero C), and it’s key to be dressed properly for the temperatures.

Elsewhere, Minnesota has called off school Monday for the entire state – the first such closure in 17 years. Schools were also closed in the Wisconsin cities of Milwaukee and Madison.

Sunday’s National Football League playoff game in Green Bay’s Lambeau Field could be among one of the coldest ever played – a freezing minus 2 degrees F (minus 19 degrees C) when the Packers and San Francisco 49ers kick off in the afternoon. Doctors have urged fans to wear at least three layers and drink warm fluids – not alcohol.