Push for federalism in Yemen faces hurdles amid widespread revolts 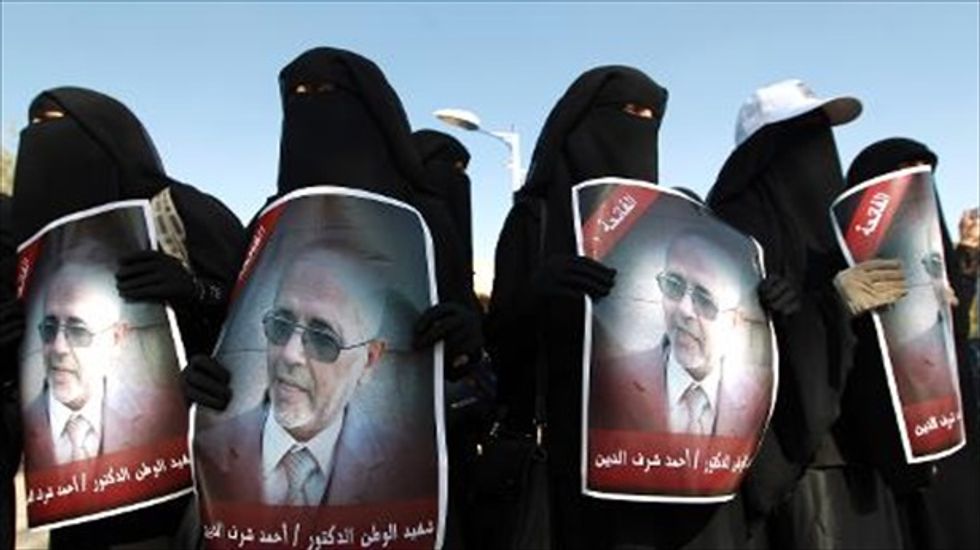 Yemeni women hold portraits of a key figure of the Shiite Huthi rebels' delegation to Yemen's reconciliation talks on Jan. 22, 2014 in Sanaa [AFP]

Reconciliation talks have outlined Yemen's future as a federal state, but its leaders now face the challenge of implementing change in an impoverished country grappling with multiple revolts.

A political transition stipulated by a UN-backed deal that saw long-ruling president Ali Abdullah Saleh step down in the face of Arab Spring-inspired protests was supposed to culminate this February with a new constitution and free elections.

But a national dialogue that is part of the same agreement concluded four months late on Saturday, extending the transitional period and allowing an extra year to draft a charter and vote on it.

In the meantime, Sanaa has struggled with an increasingly assertive separatist movement in the south, deadly clashes between Shiite rebels and Sunni Islamists in the north, and a string of attacks on security forces blamed on a powerful Al-Qaeda affiliate, all feeding a sense of crisis in the Arab world's poorest country.

Yemen's parties hope to rein in the unrest by agreeing on a federal system, but remain divided on whether it should consist of two regions or six.

Sanaa fears that a north-south division could set the stage for the south to secede, while southerners oppose the multi-region option, which would dilute their power.

"The dialogue has set the theoretical framework for a federal state," said Yemeni analyst Fares al-Saqqaf.

"This is the beginning of the process," said Ibrahim Sharqieh, professor of international conflict resolution at Georgetown University's School of Foreign Service in Qatar.

He argued that the "biggest challenge is now to apply" the decisions reached in the dialogue, pointing out that "pressure from the international community was crucial" to the success of the talks.

Interim President Abdrabuh Mansur Hadi formed a committee on Monday, led by himself, that will decide on the number of regions and insert it into the text of the new constitution, which should be drafted and voted on within a year.

Postponing the decision on the number of regions allowed the talks to conclude, but did little to resolve the underlying conflict.

A government official speaking on condition of anonymity said that Hadi has "ruled out" a north-south division of the country, which "would maintain tension in the country and leave the door ajar for future conflicts."

Southern parts of Yemen formed an independent state from the end of British colonial rule in 1967 until union with the north in 1990.

A secession attempt four years later sparked a brief but bloody civil war that ended with northern forces taking over the south.

The push for federalism, intended to mitigate Yemen's various local conflicts, may achieve the opposite, with local power brokers having stepped up demands for greater autonomy in recent months.

Shiite Huthi rebels in the north have been expanding their reach ahead of the expected demarcation through battles with Sunni fundamentalists and allied tribes.

In Hadramawt, a southeastern desert province that sits on significant oil reserves and is a stronghold for Al-Qaeda in the Arabian Peninsula (AQAP), tribes have taken to the streets since December, protesting against the central government.

Further east, representatives of Mahrah province have also demanded the formation of a separate region along with the island of Socotra.

The General People's Congress, the party of former president Saleh, who ruled for 33 years, has also been accused of covertly trying to destabilise the country.

But perhaps the biggest threat comes from the hardline Southern Movement, parts of which are leading an armed struggle.

The ability of the Southern Movement and the Huthi rebels to sabotage the agreement remains the "main fear," said Sharqieh.