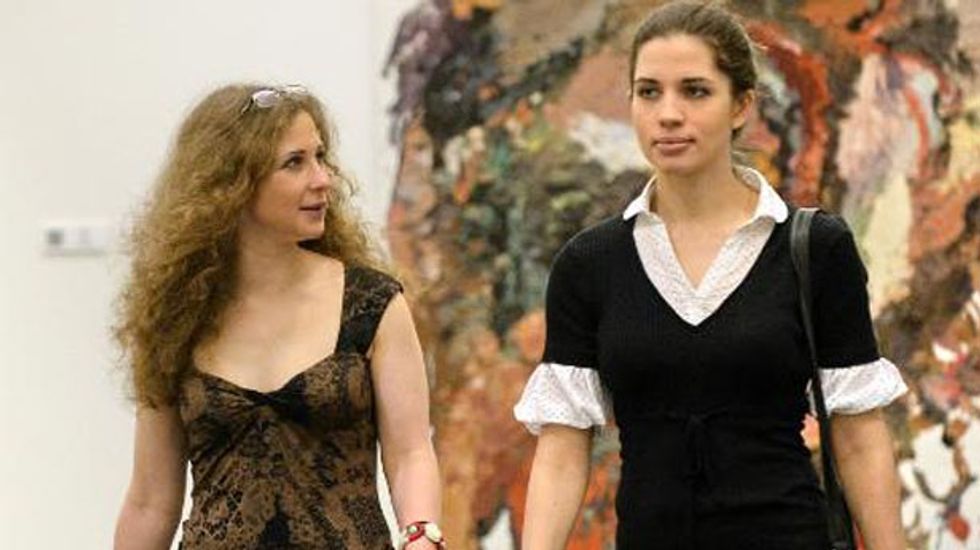 Two Pussy Riot members on Friday vowed no let-up in their campaign against human rights abuses inside Vladimir Putin's Russia as they made their first overseas trip since being released from jail.

Nadezhda Tolokonnikova and Maria Alyokhina, who were freed from prison last month, are in Singapore for a video awards ceremony where they said they would keep using creative art to promote their cause.

A video of the group's controversial protest stunt inside Moscow's top church, the Christ the Saviour Cathedral, has been shortlisted for an award in the digital/video category of the inaugural Prudential Eye Awards in the city-state.

The stunt, which the band described as a denunciation of political ties between Putin and the Russian Orthodox Church, led to three members being convicted on hooliganism charges.

"Right now we are mostly concentrated on human rights work which involves a huge amount of legal work," band member Nadezhda Tolokonnikova said through an interpreter at a media event Friday.

She said they will continue to use "video and other creative forms" to get their message across.

"We'll definitely continue our political activities and right now we are concentrated on a project which helps prisoners' rights because any such work in Russia is a political activity," said Tolokonnikova, clad in a black dress and dark tights.

Asked what the band would do with any prize money if they win, she said: "We will use our resources... including money to put (towards) this human rights project to defend prisoners' rights."

Their video has been nominated alongside works of China's Yang Yong Liang and Baden Pailthorpe and Daniel Crooks, both from Australia. The award ceremony will take place on Saturday.

Under the awards, which are sponsored by the Prudential insurance giant, the winner of each category will receive a $20,000 prize. The overall winner receives a further $30,000 and a chance to exhibit at the Saatchi Gallery in London later this year.

Pussy Riot's church protest came just ahead of Putin's re-election to the Kremlin in March 2012 and video footage of the stunt uploaded online was later banned in Russia.

Tolokonnikova on Friday credited the Russian government for the international attention the band has received, and sarcastically suggested that a state representative should be invited to share the award if they won.

But the duo said they would pursue their cause under their own names rather than as Pussy Riot members.

"We have to speak for ourselves," Tolokonnikova said.

Over the last few decades in America, partisanship has become a type of personal identity. A political party is more than an organization or the letter next to a candidate's name on a ballot. This is about much more than "political polarization" or "hyper-partisanship" or the other sterile technical language which experts routinely use in academia, the news media, and the larger political class. In today's America, party identification reflects fundamental debates and divides over what it means to be a citizen, a member of a political community and a human being.

Two concepts are particularly useful for understanding this broken politics and the larger democracy crisis:

WASHINGTON — Sen. Richard Blumenthal (D-CT), who sits on the Judiciary Committee, spoke with reporters on Thursday afternoon about his intentions over the next few weeks in approving judges. But it was his comments about the Supreme Court that the Justices might feel hits too close to home.

President Joe Biden has spent the past few years working to fill vacancies on the federal courts, reaching 97 as of this week. The Senate will cast their approval for the 100th judge in the coming weeks. Former President Donald Trump made 245 appointments in four years.