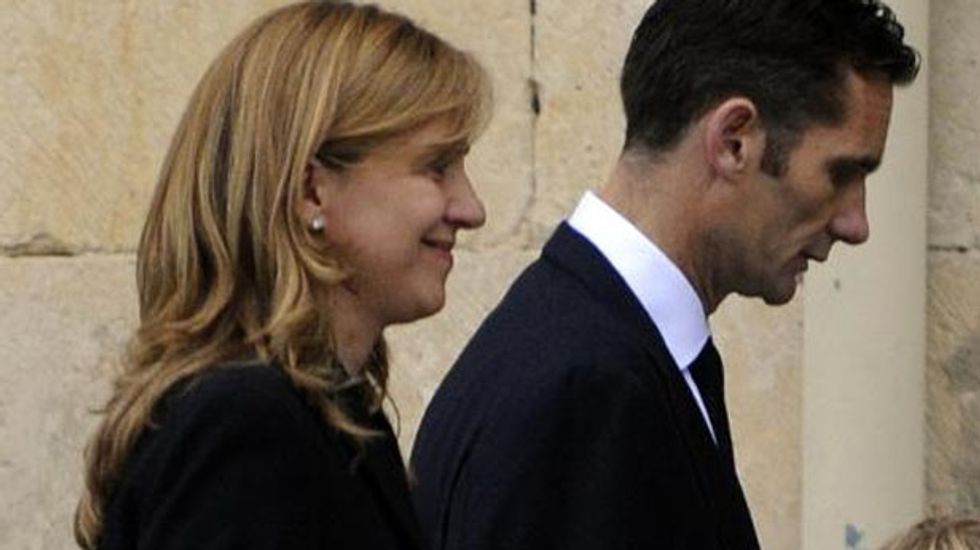 A Spanish court summoned King Juan Carlos' youngest daughter Cristina as a suspect in alleged tax and money-laundering crimes Tuesday, a historic first for a direct relative of the monarch.

Cristina, 48, has been linked to the business affairs of her husband, former Olympic handball player Inaki Urdangarin, who is under investigation for alleged embezzlement of public funds.

The decision by a court in Majorca is a major blow to the prestige of the 76-year-old Spanish king, who became head of state after the death in 1975 of General Francisco Franco and helped guide the country's transition to democracy.

Battling scandal and ill health, Juan Carlos appeared tired as he presided over a military parade while on crutches Monday in his first public appearance since undergoing an operation to replace his left hip on November 21.

The judge in Palma on the island of Majorca, Jose Castro, has been investigating the corruption scandal involving Cristina's husband since 2010. In summoning Cristina, he overruled opposition by the public prosecutor.

In a written ruling, the judge said he had decided to hear Cristina's testimony "about alleged tax and money laundering crimes", summoning her to appear on March 8 as part of an investigation that could lead to formal charges.

A palace spokesman told AFP he wanted to express his "respect for judicial decisions". He declined further comment.

Manos Limpias, a litigious far-right pressure group, lodged the case against Cristina alleging tax evasion and money laundering, although tax authorities have not brought any charges and public prosecutors have said there is no case to answer.

The judge in the Majorca court is investigating allegations that Urdangarin and a former business partner embezzled six million euros ($8 million) in public funds via the Noos Institute, a charitable foundation that he chaired.

Cristina was a member of the board of Noos and with her husband jointly owned another company, Aizoon, which investigators suspect served as a front for laundering the embezzled funds.

The Majorca judge had summoned Cristina on suspicion of corruption once before, in spring 2013, but that decision was overruled following an appeal by the prosecutor.

The judge then opened a new line of inquiry seeking evidence that Cristina was linked to her husband's activities, scrutinising her tax declarations and bank accounts for incriminating travel, restaurant or family party expenses.

"Saying ahead of time that Dona Cristina Federica de Borbon did not know of her husband's activities, and the criminal significance of her own, would be as hasty as declaring inexorably the opposite," the judge said.

The judge said he wanted to hear the princess personally explain "certain objective indications of criminality, not the fruit of fanciful speculation".

Juan Carlos is widely respected for his role in Spain's transition to democracy after the death of Franco.

But his standing among Spaniards has been damaged by the corruption scandal, and outrage over a luxury African elephant-hunting safari he took in 2012.

His health problems together with the scandals have raised speculation about the future of his reign.

The number of people with a high or very high opinion of the king fell nine points over 2013 to 41 percent, according to a poll published on Sunday in daily newspaper El Mundo.

The number of people wanting him to abdicate in favour of Prince Felipe, 45, surged by 17 percent to 62 percent, according to the study by pollster Sigma Dos carried out in late December.

Sixty-six percent had a positive view of the prince and 56 percent thought he could improve the royals' image if he took over.

General support for the monarchy as an institution, however, fell below half to 49.9 percent, according to the poll.

The royal palace and the king have firmly denied any thoughts of an abdication.

"I want to express to you, as king of Spain, my determination to continue the faithful fulfilment of the mandate and the powers attributed to me," the king said in his annual televised Christmas Eve address last month.