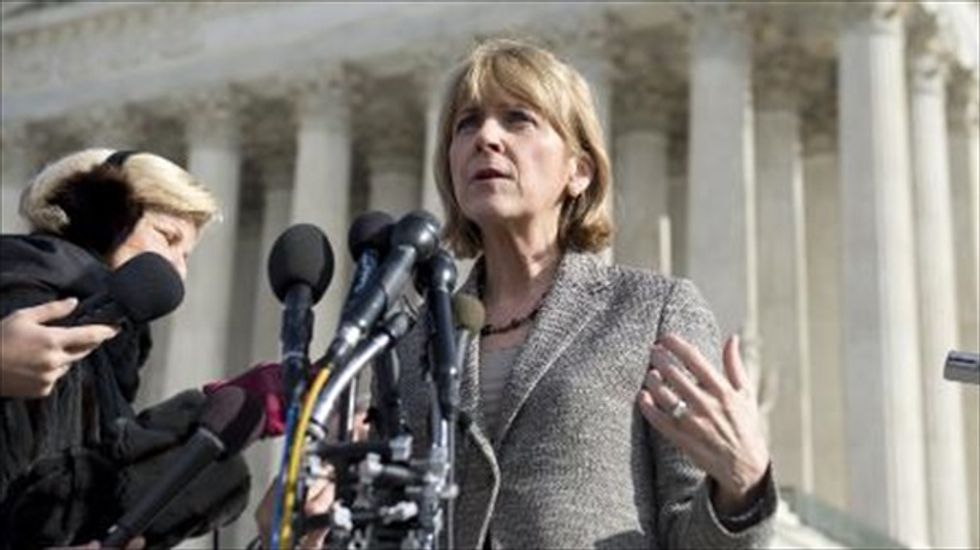 More than 40 years after legalizing abortion in the United States, the Supreme Court Wednesday appeared skeptical of a law creating a buffer zone at abortion clinics, where opponents want to be able to protest freely.

The case, which combines the controversial question of abortion with the always sensitive issue of freedom of speech, takes up a Massachusetts law that forbids anyone to come within 35 feet (10 meters) of women's health clinics where abortions are performed, unless they have business there.

Anti-abortion advocates have set up long-running protests outside many such clinics, some brandishing pictures of aborted fetuses, some handing out informational pamphlets and some suggesting alternatives to abortions to women arriving at the clinic.

In extreme cases, there have been violent attacks on staff and doctors. Two doctors who provided abortions were killed in 1994 in Massachusetts.

But since 2007, there have been no charges in the state for legal infractions by protesters around women's health clinics.

Outside the Supreme Court building in Washington Wednesday, just a handful of activists from each side showed up with signs.

"Keep abortion legal," read one from a feminist group, while another, from a demonstrator wielding a Bible, read "Supreme Court, reject bubble zone unjust law!"

During an hour-long hearing, the justices questioned the need for such a buffer zone, discussing its size and wondering if the state couldn't find another way to protect clinic employees and patients as they come and go.

The activists "want to talk to the women who are about to get abortions. It's a counseling case, not a protest case," said Scalia, who asked "What's the alternative? Standing 30 feet away and yelling?"

Progressive justice Elena Kagan also expressed concerns about the law, suggesting the zone might be too large, but a smaller one might be acceptable.

And justice Anthony Kennedy said the law seemed one-sided, preventing access only from anti-abortion activists but not interfering with, for instance, clinic staff who wanted to welcome patients.

The law makes it "a criminal act to have a conversation," argued Mark Rienzi, attorney for the anti-abortion activists.

"We shouldn't put (plaintiff Ms Eleanor) McCullen in prison because of her speech on a public street," he said.

The law "gives the state an enormous power to interfere with the market place of ideas," he argued, "to select speech... that shouldn't be permissible under the First Amendment."

"I would say it's a congestion case," said Massachusetts lawyer Jennifer Miller in response to a question from Kennedy. "It is a concern of people being able to use the facility."

Justice Ruth Ginsburg, who seemed to favor allowing the buffer zone, noted the state "doesn't know in advance who would be well behaved and who would be disruptive."

And US deputy solicitor general Ian Gershengorn argued the law "doesn't ban speech." It just moves the speech "from one public forum to another."

Surprising court watchers and despite an increased number of appeals, the nine justices chose to weigh in on the peripheral issue, shunning the heart of the controversy and a potential return to the court's 1973 "Roe v. Wade" decision that legalized abortion.

On Monday, they refused to take up an Arizona law that largely banned abortions after 20 weeks of pregnancy after an appellate court struck it down as unconstitutional last year.

It was the second time this term that the court decided against reviving a new abortion control law, after removing from its docket an Oklahoma law that limited doctors' ability to perform medical abortions.

In November, however, the court refused to block a new Texas law banning abortions in clinics lacking doctors on staff with full professional privileges at a hospital nearby. The decision triggered the closure of a third of the state's abortion clinics.

The decision in the buffer zone case "will likely be significant because of the underlying topic -- abortion," said David Hudson of Vanderbilt Law School and Nashville School of Law.

The justices seem profoundly divided on the constitutionality of laws limiting abortion, he said, and the impact of the decision could also be felt around zones protecting religious sites, slaughterhouses and funerals.