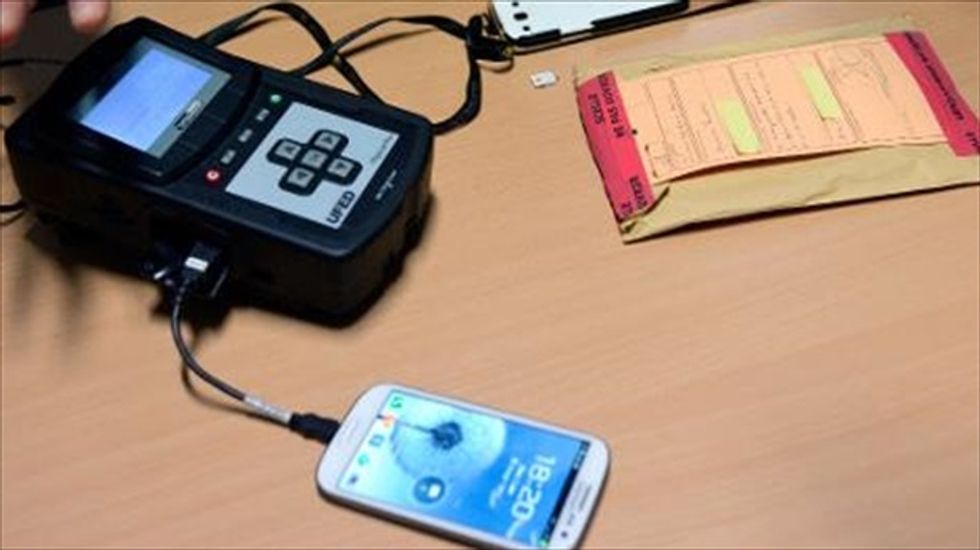 A French gendarme of the BDRIJ unit, specialized in new technologies, uses a device to access datas of a smartphone on Jan. 9, 2014 in Arras, northern France [AFP]

The US Supreme Court agreed Friday to consider whether police have the authority to search the mobile phones of suspects without a warrant, in a key constitutional test in the smartphone age.

The top US court indicated it would consider arguments later this year in two related cases on police searches of telephones.

One case involved a California student, David Riley, convicted on charges of participating in a shooting after police stopped him for driving with expired license tags.

Videos and photos on his smartphone allowed authorities to link him to "The Bloods" street gang and eventually determined his involvement in a shooting, leading to his conviction.

Riley's conviction was upheld even though he argued police had improperly used a warrantless search of his phone.

The second case involved the drugs and weapons conviction in Massachusetts of Brima Wurie, whose mobile phone contact lists and logs helped policy find a stash of drugs, guns and cash after he was arrested on suspicion of drug dealing.

The high court is likely to clarify conflicting opinions in the lower courts on whether the use of information gleaned from mobile phones is an "unreasonable search and seizure" in violation of the US constitution.

The case, likely to be decided later this year, is a key test of police authority with roughly 90 percent of the US population now using mobile phones.

It comes on the same day President Barack Obama announced his intent to rein in the bulk collection of telephone metadata by US intelligence services.