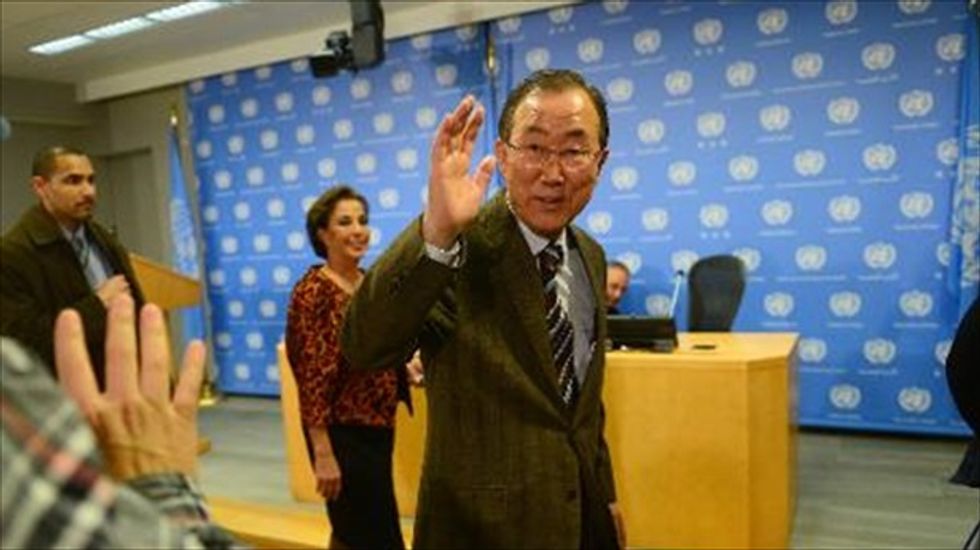 UN leader Ban Ki-moon threw Iran out of this week's Syria peace conference after it refused to back calls for a transitional government to end the country's war.

The unprecedented diplomatic action averted a Syrian opposition boycott of the talks which start in the Swiss town of Montreux on Wednesday.

But a key bloc in the opposition coalition broke away in protest at the proposed talks with President Bashar al-Assad's representatives.

Ban on Monday withdrew his surprise invitation to Iran, a major Assad backer, less than 24 hours after he announced it.

Despite the offer to take part at the peace talks, Iran refused to back a communique adopted by an international meeting on Syria in June 2012 which called for a transitional government in Damascus.

The UN leader said Iran's Foreign Minister Javad Zarif had repeatedly assured him that he "understood and supported" the aim of the peace conference was to set up an interim government.

"The secretary general is deeply disappointed by Iranian public statements today that are not at all consistent with that stated commitment," said UN spokesman Martin Nesirky.

Because of Iran's position, Ban "has decided that the one-day Montreux gathering will proceed without Iran’s participation," Nesirky added.

Ban was "dismayed" by the storm growing around the peace conference, the most intense diplomatic bid yet to end the near three-year war, the spokesman said earlier.

UN officials said Zarif had promised Ban a statement accepting the Geneva communique would be made.

But just before the UN announcement, Iran's envoy to the United Nations, Mohammad Khazaee, reaffirmed his government's stance.

"If the participation of Iran is conditioned to accept Geneva I communique, Iran will not participate in Geneva II," he said.

Ban had contacts with the US and Russian foreign ministers before excluding Iran, officials said.

The Syrian National Coalition, the main opposition, welcomed the banishing of Iran and said it would go to the talks.

However the biggest bloc in Syria's opposition-in-exile, the Syrian National Council, said it was quitting the coalition, as taking part in the talks would renege on its "commitments" to not enter negotiations until Assad left power.

In an AFP interview published Monday, Assad bluntly ruled out a power-sharing deal, insisting that the peace conference should focus on what he called his "war against terrorism".

Assad dismissed the opposition as having been "created" by foreign backers and said nothing could stop him seeking a new term as president in an election he wants to hold in June.

Although the talks start in Montreux on Wednesday, the Syrian government and opposition will start talks in Geneva on Friday.

The conference still faces major obstacles which were highlighted by the opposition splits, Assad's hardline stance and new attacks spilling over into Syria's neighbors.

A double suicide car bombing at a border post controlled by moderate Islamist rebels between Syria and Turkey killed at least 16 people on Monday, a monitoring group said.

And three former international prosecutors accused the Assad government of large-scale killing and torture in a report, reported by the Guardian newspaper and CNN television.

The report, based on the evidence of a military police defector and commissioned by Qatar, which backs Syrian rebels, said about 55,000 digital images of 11,000 dead detainees had been handed over.

The defector claimed the victims died in captivity before being taken to a military hospital to be photographed.

Some had no eyes while others showed signs of strangulation or electrocution, according to the 31-page document.

De Silva told the Guardian that the evidence showed that Assad's forces had carried out "industrial-scale killing".

The United Nations says well over 100,000 people have been killed in the war and Ban has repeatedly said the brutality of the conflict means the international community must get behind a political solution.

But the Syrian opposition, the United States and European powers have all said Assad cannot be part of any future state.

A US official said Washington had received messages from members of the Damascus regime keen to find a peaceful solution to the conflict.

"We've gotten plenty of messages from people inside, they want a way out," the State Department official told reporters.

But the dispute over Iran and Assad's future is likely to spill over into the Geneva talks, diplomats said.

Russia, a key sponsor of the talks and an Assad ally, said Iran's absence would be a "unforgivable mistake."

The United States indicated however that Ban had no alternative but to withdraw Iran's invitation.