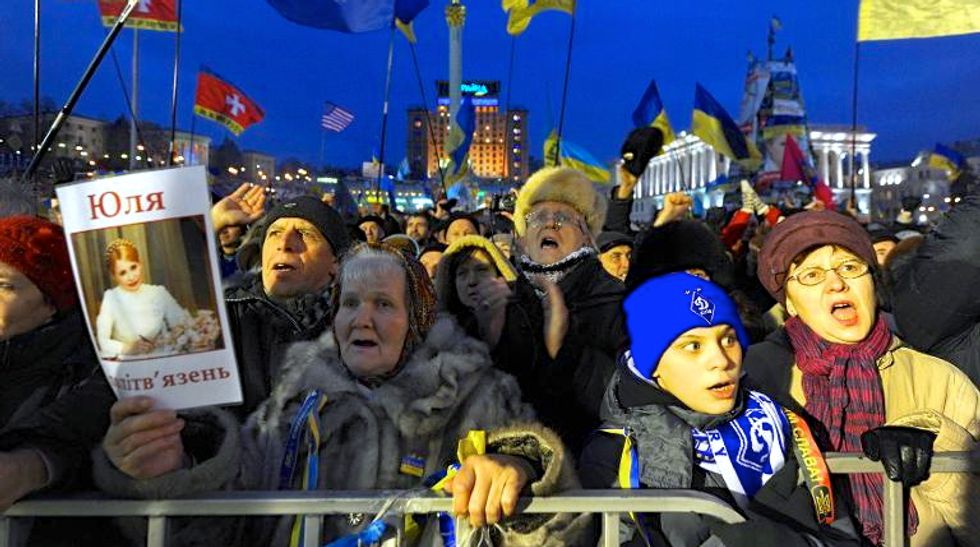 Pro-government lawmakers on Thursday pushed legislation through Ukraine's parliament on Thursday that criminalized acts of protest, an apparent bid to undermine months of demonstrations against President Viktor Yanukovych.

Backed by 235 of Ukraine's 450 lawmakers, blockading public buildings will now be punishable by up to five years in prison.

Protesters who wear masks or helmets will face a fine or an administrative arrest while the dissemination of slander online was also banned, punishable by a fine or up to one year of corrective labour.

The opposition has been leading nearly two months of rallies against Yanukovych over his decision to ditch a key trade agreement with the EU after coming under pressure from Russia.

Soon after scuttling the EU deal, Yanukovich secured a $15 billion loan from Russia and huge discounts on natural gas purchases, prompting fears that Ukraine was falling further under the Kremlin's spell.

"The regime of Viktor Yanukovych and the Regions Party have completely destroyed state power in Ukraine," said Arseniy Yatsenyuk, leader of the Batkivshchyna (Fatherland) party.

"This is nothing else but an overthrow of the constitutional system and a power grab in Ukraine," he said.

Opposition lawmakers sought to disrupt the Thursday vote but pro-Yanukovych parliament members voted by a show of hands, provoking concern from foreign officials.

"I am concerned about the way some laws were voted in parliament today," said the EU's ambassador to Ukraine, Jan Tombinski. "Norms should be adopted through proper procedures."

"Otherwise the credibility of democratic institutions and of the legal system is at stake."

"If Ukraine truly aspires to a European future, it must defend and advance universal democratic principles and values that underpin a Europe whole, free, and at peace, and not allow them to be systematically dismantled," she said in a statement.

Last month, hundreds of thousands took to the streets in the capital Kiev and western Ukraine after Yanukovych decided to scrap key political and trade agreements with the EU.

The protests have since dwindled but the opposition maintains a protest camp on Kiev's central Independence Square, known locally as the Maidan.