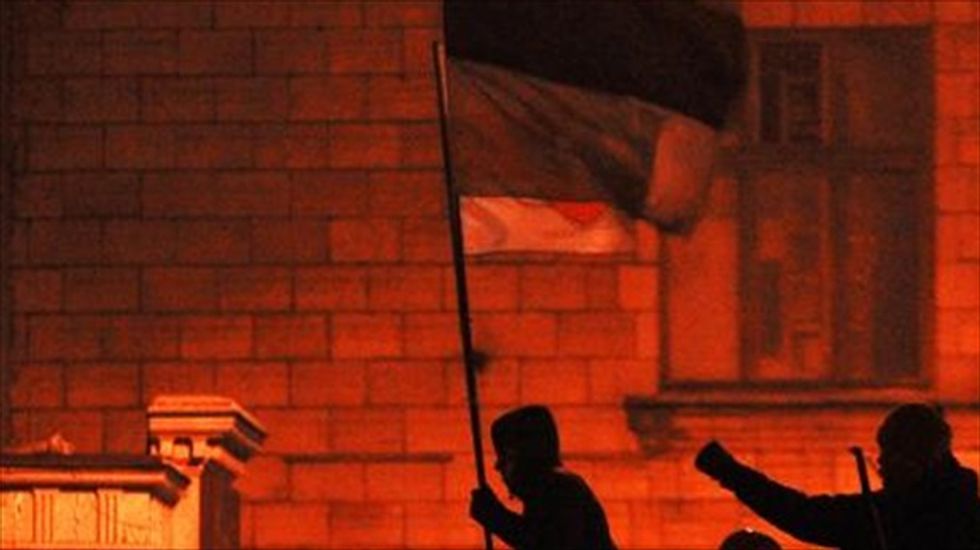 An anti-government activist stands on a barricade of the opposition in Kiev on Jan. 28, 2014 [AFP]

Ukraine's opposition on Wednesday defiantly refused to back an amnesty bill that would free activists and ease the country's worst crisis since independence, as Germany urged Russian President Vladimir Putin to use his sway to push for dialogue.

The amnesty bill was passed by parliament with the backing of the ruling Regions Party in a chaotic late night session, but opposition MPs refused to vote and it appears unlikely the law could mark any breakthrough in the standoff.

President Viktor Yanukovych has granted several concessions to protesters who have packed the centre of Kiev for the last two months, including accepting the resignation of Prime Minister Mykola Azarov. But the opposition want the head of state to go.

EU foreign policy chief Catherine Ashton said after meeting Yanukovych that it was time for "real dialogue" to start and for "the violence and intimidation" to stop.

Three activists were shot dead in clashes between police and protesters in Kiev last week, but tensions have calmed somewhat since negotiations between the government and the opposition gained traction.

However, there still appears to be no easy way out of a crisis which will influence the future strategic orientation of the nation of 46 million people sandwiched between Russia and the EU and whose economic potential remains unfulfilled.

Putin, seen as the key international player in the crisis, told German Chancellor Angela Merkel that "any outside interference is unacceptable," the Kremlin said.

Merkel for her part told Putin to push for a "constructive dialogue" to defuse the crisis in Ukraine, her office said.

In a sign of Russia's economic influence over Ukraine, Putin on Wednesday said Russia would wait until a new government is formed in Ukraine before it considers releasing a crucial $15 billion bailout package for Kiev in full.

'On the brink of civil war'

Protesters, some from right-wing radical groups, remain camped out in much of the city centre of Kiev and have now erected wooden watchtowers at their barricades. They are still occupying key municipal buildings including the Kiev city hall.

Underlining the gravity of the crisis, Ukraine's first post-independence president Leonid Kravchuk on Wednesday warned that the country was "on the brink of civil war".

"It is a revolution. It is a dramatic situation in which we must act with the greatest responsibility," Kravchuk, president from 1991 to 1994, said to applause and a standing ovation.

"We need to ease the confrontation between the sides and agree a plan to solve the conflict," he added.

The opposition did not vote for the amnesty bill as they are unhappy that the law is conditional on protestors vacating buildings they have occupied in Kiev before it takes effect.

The majority Regions Party backed the law after a rare closed-door meeting at parliament with Yanukovych who reportedly threatened early parliamentary elections if they did not support it.

A total of 232 deputies voted for the bill and 11 against, but 173 MPs present in the parliament did not vote.

Svoboda (Freedom) party leader Oleg Tyagnybok said that parliament had essentially adopted a law about "hostages" as the dozens arrested during the crisis would now be held until buildings are freed.

"The authorities have now admitted they take hostages like terrorists do, so that they can then barter over them," he was quoted as saying by the Interfax-Ukraine news agency.

He said that the law had been adopted with gross violations of parliament rules and the "vote was absolutely illegitimate".

The UDAR (Punch) party leader and world boxing champion Vitali Klitschko warned: "Instead of lowering the temperature in society this is going to raise it."

Dozens of activists have been arrested since clashes broke out January 19, both in Kiev and in the provinces, where activists have stormed regional administration buildings.

Azarov and his entire government resigned on Tuesday after weeks of protests that began when Yanukovych pulled out of a key EU deal in favour of closer ties with Moscow in November.

In the biggest concessions to the opposition so far, parliament on Tuesday also scrapped anti-protest laws which had ignited the current upsurge in tensions when they were passed by parliament on January 16.

First Deputy Prime Minister Sergiy Arbuzov, who is also close to Yanukovych and is seen as a member of the president's "family" inner circle, has taken over as premier in a caretaker role until a replacement is named.

There is little sign that Yanukovych will give in to the opposition demand that he step down.

The president is "firmly intent" on holding onto power, and will likely use force or illegal steps to counter popular protests, the US intelligence chief James Clapper said.