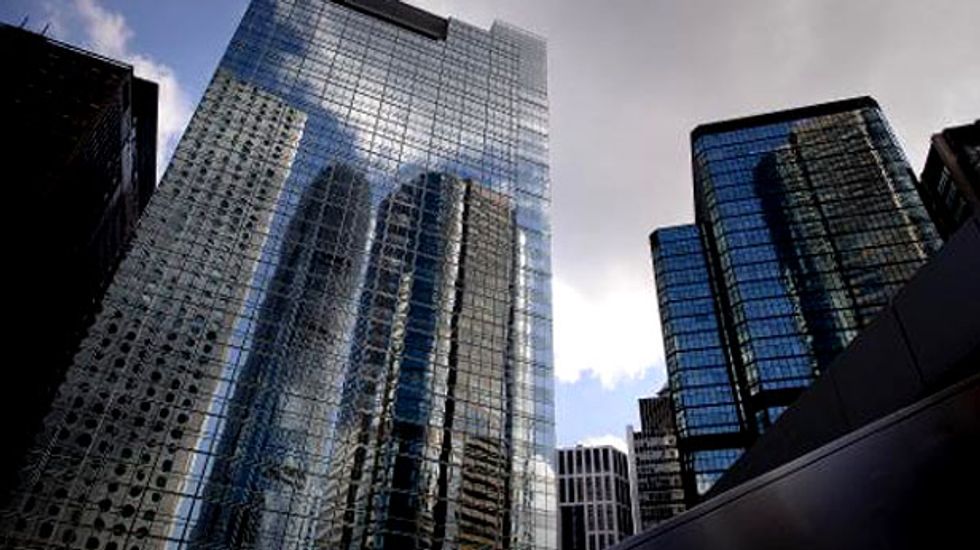 Across the world, bankers are plummeting to their deaths.

In the latest of a series of fatal falls,  a 33-year-old J.P. Morgan employee leapt from the roof of J.P. Morgan's Hong Kong headquarters on Tuesday, above, plunging thirty stories to his death.

The employee's role at the bank was unknown. Witnesses say police tried to stop the man from jumping to no avail. The employee's death is just the latest in a string of seeming suicides that have wreaked havoc in the moneyed class over the past months.

On Jan. 26, a former Deutsche Bank and Merrill Lynch executive with close ties to the co-chief executive of Deutsche Bank was found dead in London after police received reports of a man found hanging in his house. On Jan. 27, a senior manager at J.P. Morgan's European headquarters plunged to his demise from the bank's headquarters in the same city. And several days later, in Washington state, the chief economist for Russell Investments fell down a 50-foot embankment and died.

Police categorized all three deaths as non-suspicious. The Russell Investments economist was reported to be having "problems at work;" the J.P. Morgan executive landed on an adjacent roof and could be seen from the office kitchen (a building employee said other staffers "avoid[ed] entering the room as a result," even though the body wasn't removed until four hours later), and the former Deutsche Bank exec was passed over to become chief risk officer for his company in 2012.

But that's not all.

- Two weeks ago, Richard Talley, 57, the founder of American Title Services, was found dead with up to eight wounds to the torso and head after apparently shooting himself with a nail gun. (His company was under investigation by state insurance regulators.)

- Last Thursday, 37-year-old JP Morgan executive director of equities Ryan Henry Crane died in his Stamford, Connecticut home. No reason was given; the cause of death will be formalized when a toxicology report is released in six weeks.

- And also in January, U.K.-based communications director at Swiss Re AG, Tim Dickenson, was found dead; the circumstances surrounding his death remain unknown.

There's also the matter of a missing commodities journalist.

Police have yet to find any trace of David Bird, 55, a 20-year veteran of the Wall Street Journal who covered commodities markets and was last seen leaving his New Jersey home Jan. 11. Reports the Journal:

The Long Hill police department, which is leading the effort, had three searchers out Friday... The Federal Bureau of Investigation is assisting as needed, a bureau spokeswoman said.

Mr. Bird was putting away Christmas decorations with his wife, Nancy, when he put on his red rain jacket and said he wanted to take a quick walk before an expected rainstorm. He left the house at 4:30 p.m.

He didn't take his phone or the twice-daily medication he needs as a liver-transplant recipient. The couple has two children, ages 12 and 15.

Bird was reporting on global and U.S. energy commodities at the time of his death, a subject under investigation by the U.S. Senate’s Permanent Subcommittee on Investigations for possible manipulation. In December, he reported on OPEC's struggle to maintain oil market stability; his beat also included shale oil reserves.

The Senate took up the cause of possible oil and aluminum market manipulation last July. Among those targeted in the probe, according to The Journal, were J.P. Morgan, Goldman Sachs and Morgan Stanley.

The Journal suggested one reason for the possible deaths: overworking. In 2013, bankers' long hours came under the microscope after the death of 21-year-old  Bank of America intern Moritz Erhardt. Erhardt had  pulled a 72-hour shift before being found dead in his apartment last August.

But today in Hong Kong, coworkers say the 33-year-old man who leapt to his death Tuesday had complained about being under "heavy work-related stress." No suicide note was found.

Another reason might be related to probes by federal and state investigators. J.P. Morgan has been under heavy scrutiny in China over bank deals, where the company reportedly lubricated the wheels for hiring friends and family of the well-connected. One of their programs was internally named "Sons and Daughters"; the U.S. is currently investigating the bank for bribery.

"The S.E.C. is coordinating its civil investigation with federal prosecutors and the F.B.I., officials said on Thursday, though the criminal authorities have not yet contacted the bank," the New York Times reported last August. "Hong Kong authorities are also investigating the hiring practices, according to people briefed on the matter."