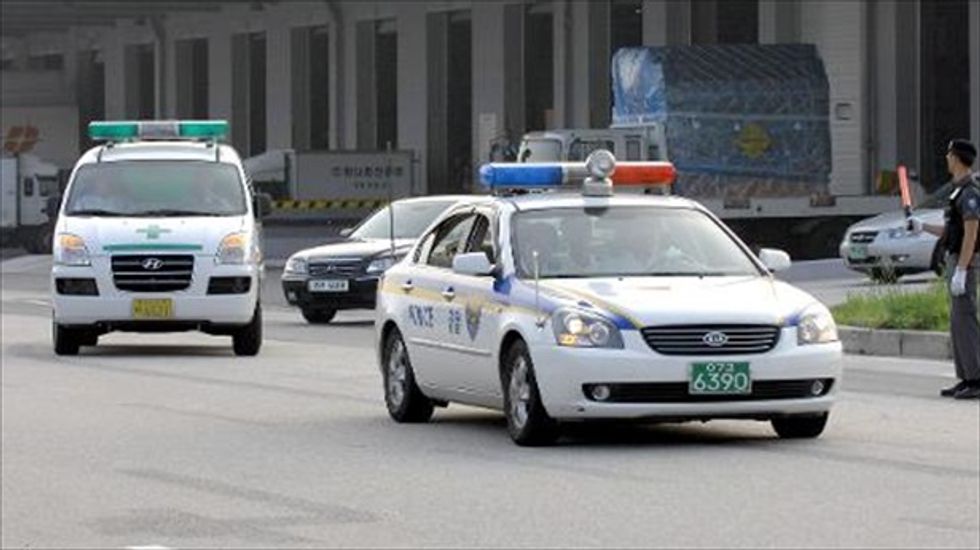 At least 10 people were killed and more than 100 injured when an auditorium packed with students collapsed at a resort near the southern South Korean city of Gyeongju, officials said Tuesday.

More than 560 college students participating in a freshman orientation were believed to have been attending a concert in the building when the roof caved in on Monday -- apparently under the weight of heavy snow -- around 9:15 pm (1215 GMT).

"Ten people are confirmed dead, two were seriously injured and 101 others suffered bruises and cuts", a spokesman from the Ministry of Security and Public Adminstration told a press briefing in Seoul.

All the students were believed to be accounted for, but rescuers were still searching the site Tuesday morning for anyone still trapped inside.

Nine of the dead were college students, police said, adding that an event organiser was also killed.

More than 1,400 rescuers and workers, backed by heavy equipment, worked throughout the night under arc lights to clear the debris and snowfall to reach the victims.

Fire officials said the collapse appeared to have been caused by the weight of the snow which had piled up on the roof.

The auditorium was a pre-engineered building, assembled with rigid frames and side walls -- of a type normally used for storage houses and aviation hangars.

"The ceiling came crashing down at the front near the stage," one student told the YTN news channel.

"Then pandemonium broke out and everyone started rushing towards the exits, shouting and screaming," he added.

Footage broadcast on YTN and pictures taken at the site by the Yonhap news agency showed fire officials searching by torchlight for people trapped in the twisted metal of the buckled building.

In one shot, rescuers could be seen trying to free a young woman pinned by a metal sheet.

The ground around the building was covered with a thick blanket of snow, which continued to fall throughout the night, hampering the rescue efforts.

The auditorium was part of the Mauna Ocean Resort, which had been hosting the freshman orientation event for close to 1,000 students from a foreign language college in the southern city of Busan.

Fire officials said they had difficulty reaching the resort which was in an area that has experienced unusually heavy snowfall of more than 50 centimetres (20 inches) in the last week.

The resort owner, Kolon business group, issued a public apology over the disaster, promising full compensation and support for the victims.

Yonhap cited police officials as saying they would open an investigation once the rescue work had been completed.

The investigation is likely to focus on whether snow had been cleared from the roof of the auditorium and whether the building was an authorised structure that met safety standards.

The city of Gyeongju is a popular tourism spot for both Korean and international travellers. Once the capital of the Silla kingdom, it boasts numerous historical sites and is located at the southern fringe of the Taebaek mountains.

The Mauna Ocean Resort is a sprawling holiday complex nestled on a mountainside complete with holiday villas and a golf course.

A Cuban court has sentenced two artists critical of the communist state to nine and five years in prison, officials said Friday, the latest in a string of heavy penalties doled out to government dissenters.

US recession would be 'necessary price' to defeat inflation: IMF chief

But any temporary pain caused by a recession would be "a necessary price to pay" to defeat damaging inflation, she said.