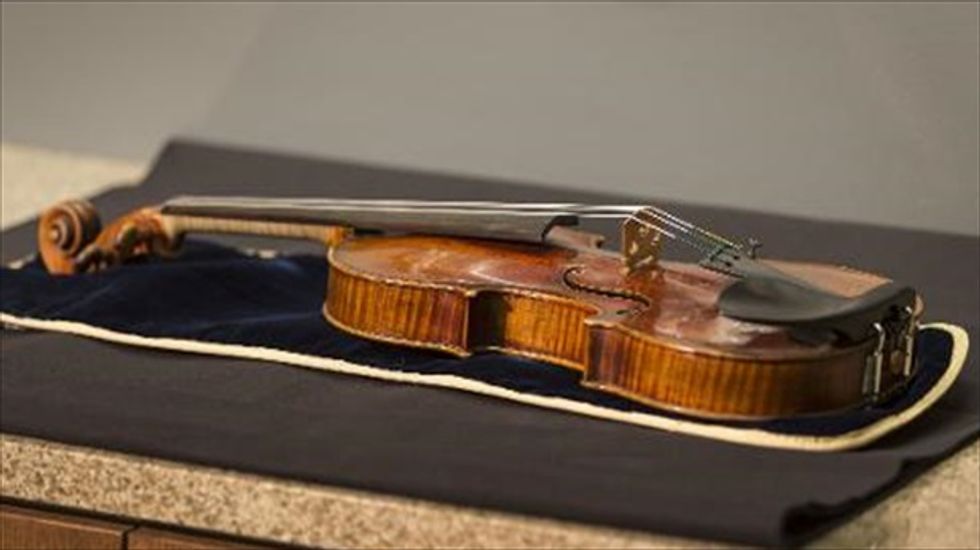 The 300-year-old Stradivarius violin that was taken from the Milwaukee Symphony Orchestra's concertmaster in an armed robbery, on Feb. 6, 2014 in Milwaukee, Wisconsin [AFP]

In a stirring finale after a discordant series of events, US police recovered a rare Stradivarius violin that had been snatched from the concert master of the Milwaukee Symphony Orchestra.

A photo of the gleaming, 300-year-old instrument resting on a velvet cloth under a massive Milwaukee Police badge was issued to celebrate its safe return more than a week after the attack.

Around 600 of the violins made by the 17th century Italian master craftsman Antonio Stradivari are still in existence and they are prized for their incredible -- and inimitable -- sound.

One fetched about 11 million euros ($13.5 million) in a 2011 charity auction for victims of the Japanese tsunami.

Named after an early owner, the Lipinski Stradivarius stolen last week was on loan from an anonymous donor whose Wisconsin-based family had owned it for more than 50 years.

Three thieves set upon concertmaster Frank Almond after an evening performance at Wisconsin Lutheran College at 10:20 pm on January 27 and knocked him out with a stun gun.

Police were able to find the discarded case within a matter of hours but initially had little luck convincing the thieves -- who were arrested on Monday -- to tell them where to find the violin itself.

But within hours of a press conference on to announce the rests and a $100,000 reward, police were able to find the violin in a suitcase in the attic of a home on the city's east side.

Police said they believe the robbery was a "theft of opportunity" and that the thieves were not part of a crime ring.

One of the thieves -- Salah Jones -- made headlines in 1999 when he stole a painting from a Milwaukee art gallery and then tried to sell it back, local media reported.