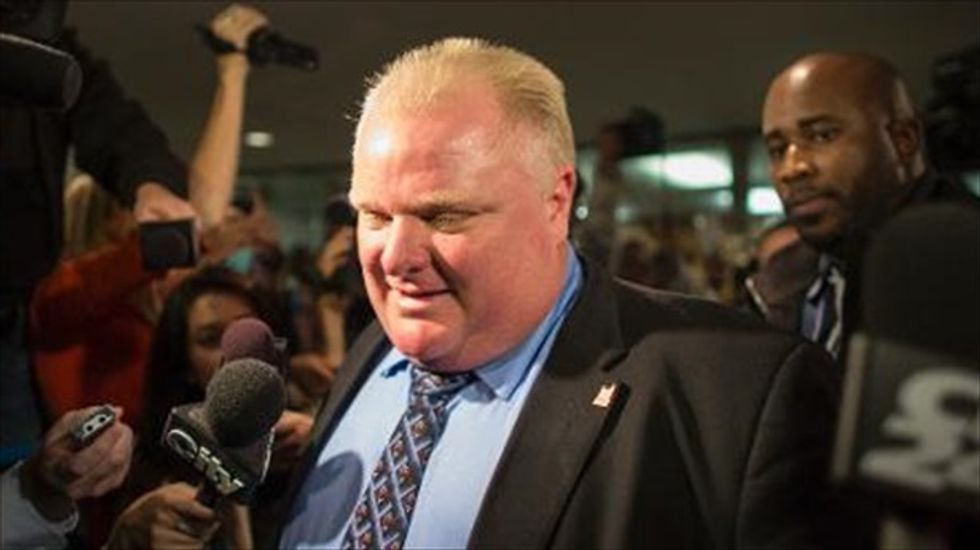 Toronto Mayor Rob Ford is surrounded by the media as he leaves his office at Toronto City Hall on Nov. 15, 2013 [AFP]

The mayor, mired in scandal for months after being accused of unseemly behavior during a series of drunken rampages, has been stripped of most of his powers.

The anti-tax populist still enjoys strong opinion poll support and has not been deterred from seeking a new term.

Tory and Stintz will face city budget chief David Soknacki, Ford and 28 lesser known candidates in the race for mayor of Canada's largest city in a vote eight months away.

Tory was immediately cast as the greatest threat to Ford.

But, with the frontrunners all calling for fiscal accountability and low taxes and presenting overlapping transit strategies, it's also possible a left-wing candidate could swing the election.

One such candidate could be Olivia Chow, a federal opposition MP and widow of the Canadian left's political icon, Jack Layton. She has not yet officially declared, but is widely expected to run.

Despite the scandals, Ford's diehard backers in the suburbs of the Canadian metropolis have so far kept his prospects alive, with polling showing steady support at about 45 percent.

The mayor's camp was quick to attack Tory after he announced his bid, casting him as a member of Toronto's "elite" and Ford as a champion of the working class, though the Ford family's net worth is estimated at Can$10 million.

"You're looking right now at bluebloods and the establishment and the elites of John Tory versus the blue-collar, hard-working folks," said the mayor's brother and city councillor, Doug Ford.

Tory, who is making his second run at the mayor's job after narrowly losing in 2003, told reporters he hoped to bring decency and decorum back to Toronto City Hall.