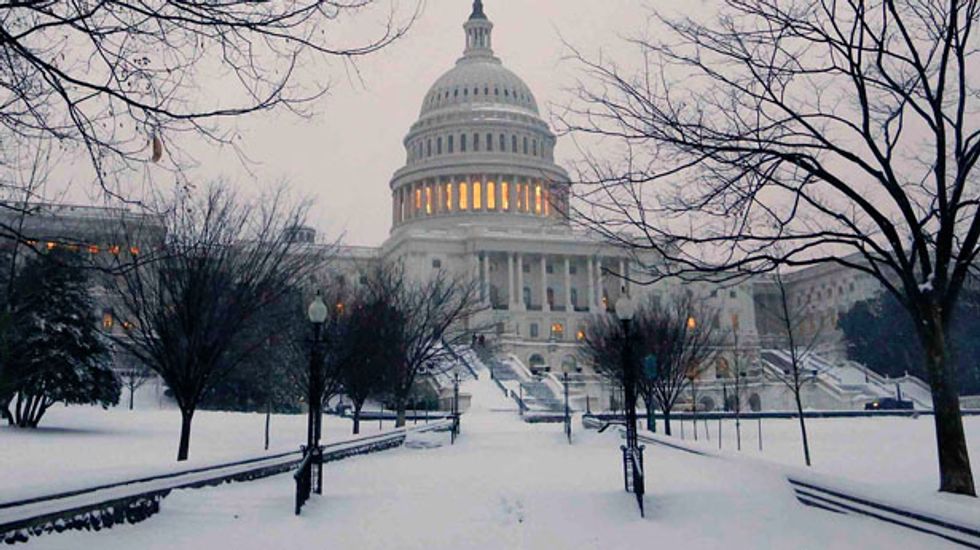 Winter storm warnings and advisories were in place from Georgia up to Maine, and the powerful system could blanket the Atlantic Coast over the next two days with 12 to 18 inches (30 to 46 cms) of snow, said Jared Guyer, a meteorologist with the National Weather Service.

The Washington, D.C., area awoke to its heaviest snowfall of the winter. The federal government was closed, along with school districts in the area.

Washington's bus service was suspended, and residents were advised to stay home if possible rather than risk a commute through snow accumulations of as much as a foot throughout the area.

All runways at the city's Dulles and Reagan National airports were closed, as well as schools in Philadelphia, Baltimore and New York.

About 4,470 domestic and international flights were canceled and another roughly 290 were delayed early on Thursday morning, according to flight-tracking website FlightAware.com.

The storm system, which has dumped heavy snow, sleet and freezing rain from eastern Texas to the Carolinas since Tuesday, was blamed for at least 13 deaths in the Southern region and for knocking out power to hundreds of thousands of customers.

An ice storm warning was in effect for parts of central Georgia on Thursday morning, after about one inch of ice had accumulated there and into South Carolina. Schools across the South were closed again on Thursday.

Roughly 8 inches of ice and heavy snow has now accumulated in parts of North and South Carolina, Guyer said, possibly a historic level.

"The catastrophic part is mostly the ice across the South where they're getting anywhere from a half inch to an inch of ice accumulating on power lines and trees," said Bob Oravec, lead forecaster at the National Weather Service in College Park, Maryland.

Traffic on interstate highways ground to a halt on Wednesday as the snowfall picked up quickly and fatal road accidents and weather-related deaths were reported in Mississippi, South Carolina, North Carolina and Georgia.

Governors declared states of emergencies from Louisiana to New Jersey.