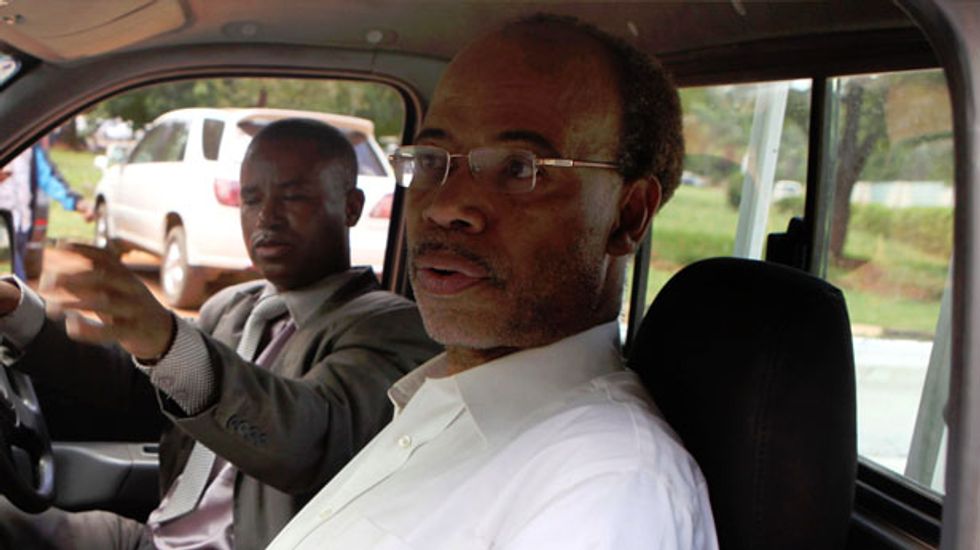 HARARE (Reuters) - Former congressman Mel Reynolds pleaded not guilty on Wednesday to charges of possessing pornographic images and videos, two days after his arrest at a hotel in Zimbabwe.

Reynolds, 62, a convicted sex offender in the United States, will also face charges on Thursday of staying in the southern African country without a valid visa.

Lawyer Arthur Gurira entered a 'not guilty' plea on behalf of Reynolds, who sat motionless in the dock. The former Illinois congressman, who wore a creased grey suit, faces a maximum two-year jail term or a fine if convicted on the pornography charge.

Gurira asked the magistrate court to allow his client to seek medical attention for an unspecified illness and said he would apply on Thursday for his release from detention.

Gurira said he was also trying to convince Reynolds to plead guilty to all the charges.

"I am still trying to persuade him to plead guilty to all the charges, they are not that serious. I believe he will get a fine on the pornography charge because he never caused them (the pictures and videos) to be published," said Gurira.

State prosecutors accuse Reynolds of possessing "nude pictures and videos of naked women and men having sexual intercourse" on his mobile phone, according to the copy of the charge sheet seen by Reuters.

Possession of pornography is illegal in Zimbabwe.

Reynolds arrived at the courthouse in a police truck and when asked by reporters how he had been treated in custody, he replied: "Fine".

If Reynolds is convicted of violating Zimbabwe's immigration laws, he could be deported, his lawyer said.

The state-owned Herald newspaper reported on Tuesday that Reynolds had run up $24,500 in unpaid hotel bills.

Reynolds, a former Rhodes scholar, was a fast-rising star in the U.S. Democratic party when he was forced to resign in 1995 after being convicted of sexual assault, obstruction of justice and solicitation of child pornography.

In recent years Reynolds had recast himself as a champion of U.S. investment in Africa.