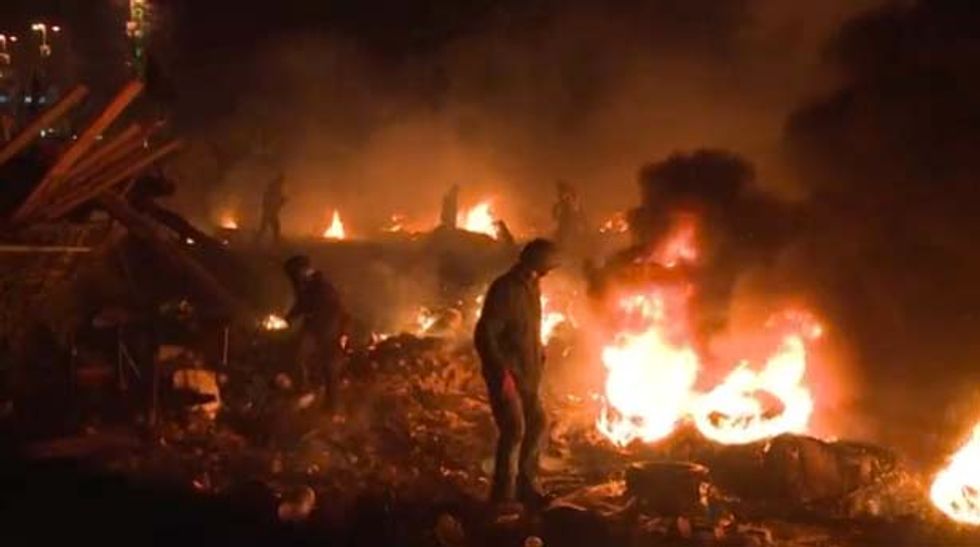 The retreating police unleashed a hail of rubber bullets on protesters as plumes of acrid smoke billowed into the air amid the explosions of stun grenades.

The lobby of the Ukraina hotel overlooking the square was turned into an impromptu morgue, with the bodies of seven dead protesters laying side by side under white sheets on the marble floor in front of the reception desk.

An AFP photographer saw spent live cartridge shells littering the ground on the square. It was unclear who had used the ammunition.

The main government building nearby was evacuated while lawmakers ended a session of parliament early after the violence.

The country's three main opposition leaders put the blame for the fresh unrest on the authorities, calling it a "planned provocation."

The clashes shattered a truce that Ukrainian President Viktor Yanukovych had called late Wednesday in response to a spurt of violence that killed more than two dozen people in less than two days.

Yanukovych was holding crisis talks with the foreign ministers of EU powers France and Germany along with Poland ahead of an emergency meeting in Brussels at which the European Union was expected to impose sanctions against Ukrainian government officials for the unrest.

The US State Department had earlier announced slapping travel bans on about 20 senior Kiev government figures over fighting that killed at least 28 people on same central Kiev square on Tuesday night.

Yanukovych has appeared to struggle to formulate a clear policy over a frantic 48 hours that saw Ukraine's deadliest violence since independence and an escalating Cold War-like war of words between the West and former master Moscow over the future of the country sandwiched between Russia and the European Union.

AFP reporters said they saw the bodies of at least 25 protesters with apparent gunshot wounds around two popular Independence Square hotels and lying outside the central Kiev post office on Thursday.

Ukraine's interior ministry said that one policeman died from gunshot wounds sustained in the clashes while 29 officers had been injured.

The latest deaths bring to at least 54 the number of people killed in Ukraine since the start of the week, according to health ministry and AFP counts.

Ukraine's crisis was initially ignited by Yanukovych's shock decision in November to ditch an historic EU trade and political association agreement in favour of closer ties with Kiev's historic masters in the Kremlin.

But it has since evolved into a much broader anti-government movement that has swept through both the pro-Western west of the country as well as parts of its more Russified east and exposed the deep historical fault lines between the two.

Yanukovych had appeared determined on Wednesday to end the crisis by force after the country's security services announced plans to launch a sweeping "anti-terror" operation.

He also sacked the army's top general -- a powerful figure lauded by the opposition for refusing to back the use of force against those who had come out on the street.

But he then received three top protest leaders and told them he would take no immediate action against those who have taken to the streets against his rule, including charismatic boxer-turned-lawmaker Vitali Klitschko.

US President Barack Obama urged the government Wednesday to refrain from using violence against peaceful protesters and warned of "consequences" if any further abuses take place.

The crackdown on protesters triggered a storm of condemnation from the West while the Kremlin denounced an "attempted coup" by the demonstrators.

The US State Department announced it was imposing visa bans on about 20 senior Ukrainian officials "complicit in or responsible for ordering or otherwise directing human rights abuses."

Western pressure was set to mount still further on Thursday when the European Union considers its own measures during a meeting in Brussels, with France saying ahead of the meeting that the bloc would prepare sanctions against those responsible for the violence.

Moscow meanwhile has issued a string of outraged comments condemning both the protesters and the West.

President Vladimir Putin's spokesman placed all responsibility for the unprecedented violence on "extremists (whose) actions can be seen and are seen in Moscow exclusively as an attempted coup d'etat".

Prime Minister Dmitry Medvedev told Russia's cabinet on Thursday that Moscow intended to follow through on its commitment to issue the next tranche of a $15 billion bailout that Putin and Yanukovych agreed shortly after Kiev rejected the EU pact.

But Medvedev said Moscow needs "partners who are in good shape and for the authorities that work in Ukraine to be legitimate and effective."

At the Winter Olympics in Russia's resort of Sochi, a Ukrainian alpine skier and her coach pulled out of the games in protest at the authorities' deadly use of force.