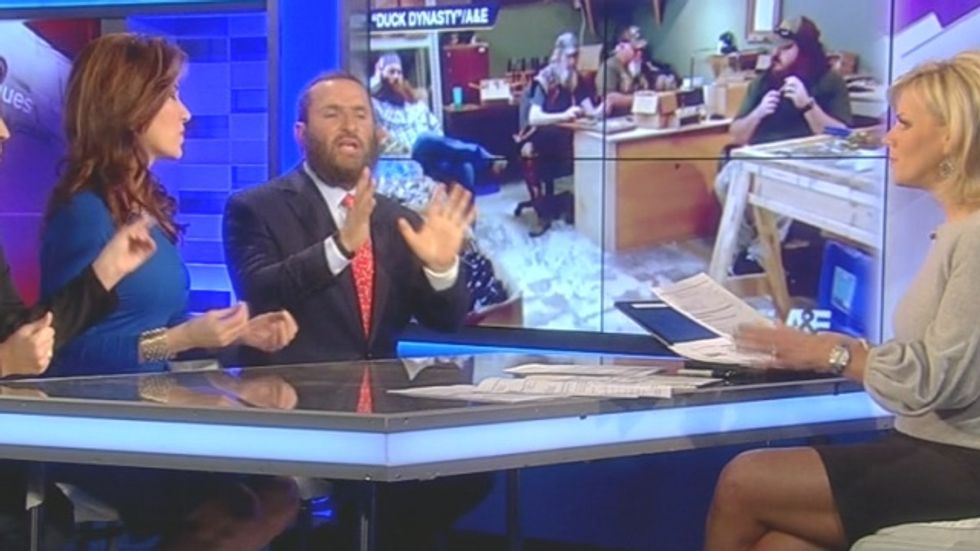 Shmuel "Shmuley" Boteach, a conservative rabbi who ran for office as a Republican and was endorsed by House Majority Leader Eric Cantor (R-VA), on Tuesday blasted Duck Dynasty reality star Phil Robertson for doing "tremendous damage to religion" with his anti-LGBT comments.

During a religion panel on Tuesday, Fox News host Gretchen Carlson asked CBN's Wendy Griffith if she approved of a Bible study curriculum that was being branded with the "Duck Dynasty" name.

"I think it's perfect," Griffith replied. "They are just being who they are. They are people of faith. They realize that their fame could be short-lived and they're making the most of it. They're saying, you know, 'We want to take a lot of people to heaven with us when we go so we're going to do this, we're going to bring it into the churches.' I think it's great."

While Giffith seemed to have forgiven the recent remarks comparing homosexuals to terrorists, Boteach clearly had not forgotten.

"Amanda's comment is very telling," Boteach said. "The religious person hears a calling. It's not career, it's not about them, it's about the wider contribution they can make to society in general. And that breeds humility."

"But on this with Duck Dynasty, they've done tremendous damage to religion," he added. "We have to stop making religion in America about bashing gays. They just have to forswear that stupid comment about comparing homosexuality to bestiality."

And Boteach was just warming up: "You see the problem in America is we overlook all the heterosexual guys who are raping women, one in five, on the campus. We saw this terrible statistic that in Alaska..."

The rabbi was probably going to make a point about Alaskan women being raped at a rate three times the national average, but Carlson and Griffith cut him off.

"I don't think that's what they're about," Griffith argued.

"Bashing gays is not religion!" Boteach shot back. "What is religion is family dinners and combating the divorce rate."

"If Christians want to buy this from somebody who's made very bigoted and very stereotypical and very awful comments about women and African-Americans that's their choice," American Atheists Managing Director Amanda Knief pointed out. "But I am certainly going to find my moral leanings from someone else, not from reality TV characters."

"Well, if people are interested, this church curriculum comes out in May," Carlson said in conclusion.