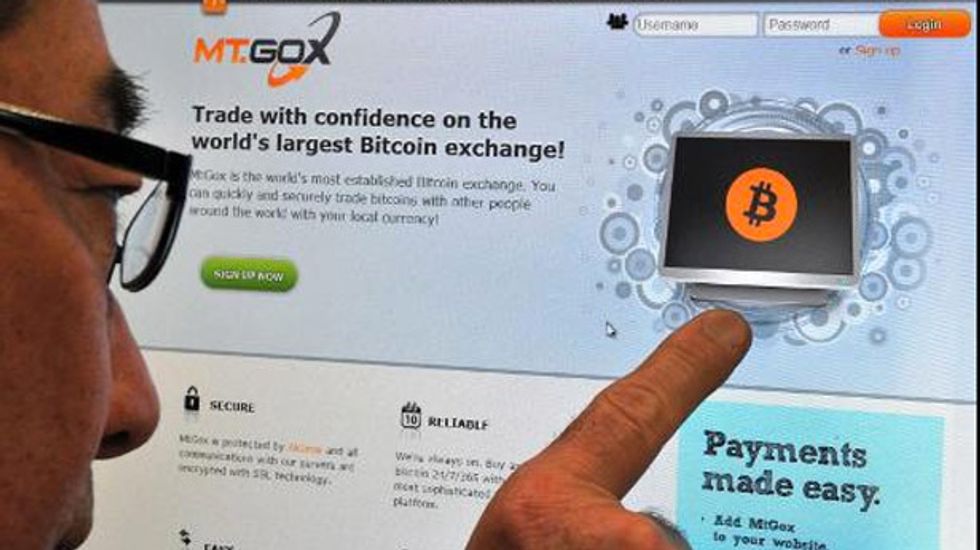 Japanese authorities were Wednesday probing the troubled MtGox bitcoin exchange after claims of a multi-million dollar theft from its digital vaults, as US prosecutors reportedly served a subpoena on the company.

The moves came the day after the website of Tokyo-based MtGox went dark, possibly heralding huge losses for investors, and sending ripples of alarm throughout the global community of digital currency adopters.

"I understand that ministries and agencies concerned -- financial services, police and the finance ministry -- are looking into the matter to learn the full scope of the issue," Japan's Chief Cabinet Secretary Yoshihide Suga, told reporters.

"Once we have full knowledge of what happened, we will take action if necessary," he said.

The comments, at a regular press conference, were the first government reaction to events at MtGox, which froze withdrawals earlier this month, claiming there was a bug in the software that underpins bitcoin, making it vulnerable to thieves.

The value of the volatile unit plunged on the Tokyo exchange and was bobbling around $130 on Tuesday, around a quarter of what it was fetching on other platforms, until the site suddenly disappeared at lunchtime.

Hours later, MtGox published a statement saying: "In light of recent news reports and the potential repercussions on MtGox's operations and the market, a decision was taken to close all transactions for the time being in order to protect the site and our users."

A widely-shared document purporting to be a MtGox "crisis strategy" said the firm might have lost more than 744,400 bitcoins in a theft that had gone unnoticed for years.

That number of bitcoins would be worth more than $400 million, using rates at functioning exchanges Wednesday afternoon, where the bitcoin was trading around $570.

The figure would represent around five percent of all the bitcoins in existence.

Protester Kolin Burges, who has kept vigil outside the Tokyo headquarters of MtGox, tweeted Wednesday that he wanted legal action taken against the firm's chief executive Mark Karpeles.

"Will #MtGox ever stop lying to their customers? Blaming closing of exchange on news reports? I want to see Karpeles in jail," he wrote.

The Wall Street Journal reported on its website that MtGox has been served with a subpoena by US federal prosecutors in New York (Frankfurt: HX6.F - news) .

Citing an unnamed "person familiar with the matter" the paper said the document was sent this month and demanded that MtGox preserve certain documents.

A subpoena compels its recipient to produce evidence or bear witness, on pain of legal punishment.

The crypto-currency community rallied round in defence of bitcoin on Tuesday, blaming MtGox for problems which they said did not affect the integrity of the unit.

But observers warned the apparent disappearance of hundreds of millions of dollars-worth of the currency could deal a blow to its legitimacy.

The value of the unit on MtGox dropped over the following weeks far below that on other working exchanges.

The shutdown knocked around 15 percent off the world price for bitcoin, but it steadily recovered its losses and by Wednesday afternoon was trading around $560.

In January a bitcoin was worth more than $900 at MtGox, one of the world's first exchanges for the unit.

Wild volatility has long been a part of the experimental digital currency, which does not have the backing of a central bank or government and falls outside traditional financial regulatory frameworks.

But some economists have said the stomach-churning fluctuations in value -- which have made it the vehicle of choice for thrill-seeking investors over recent months -- makes it problematic, as does its apparent vulnerability to online thieves.

Others note that the anonymity it offers is attractive to underworld figures and cite its use to buy drugs and guns on the underground Silk Road website.

MtGox has not responded to repeated requests from AFP for comment.