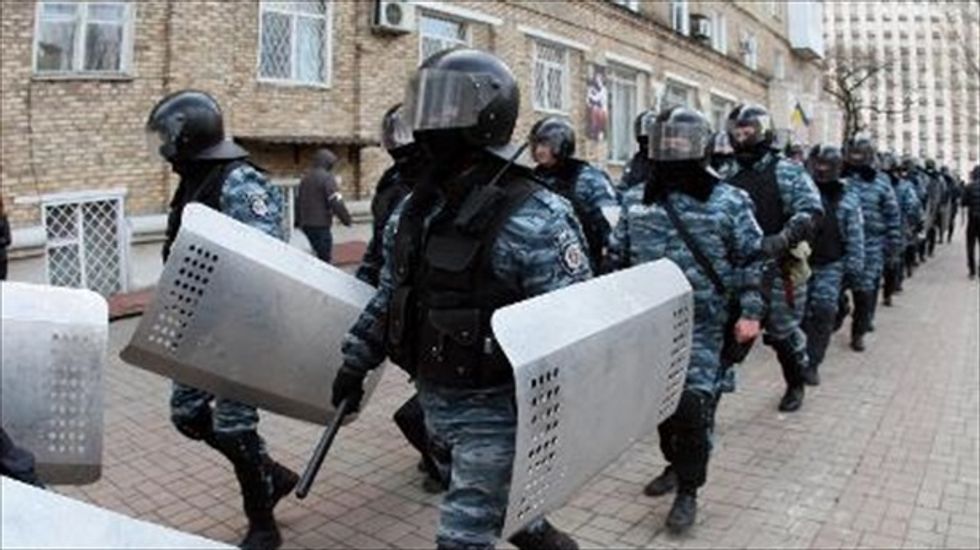 Riot police try to prevent clashes between Ukrainian President supporters and Maidan opposition activists in the industrial city of Donetsk on Feb. 23, 2014 [AFP]

A thin wisp of smoke rises from a chimney in the barricaded residential complex of deposed president Viktor Yanukovych in the eastern city of Donetsk, but Ukraine's most famous fugitive is nowhere to be seen.

The mystery of the former president's whereabouts has gripped the nation since he fled the capital on Friday, following a week of deadly clashes between anti-Yanukovych protesters and security forces. Many believe he is holed up somewhere in the Russophone east of the country.

"I am sure we won't find him. So many people have been looking for him for so many days," said local firefighter Vitali, who was accompanying AFP reporters.

The cluster of opulent villas, a few kilometres outside the industrial city of Donetsk appears thoroughly deserted apart from that small line of smoke.

"If I knew anything, I would say it and get a huge reward," said Vitali.

Donetsk, home to one million residents, sits deep in the heart of the Donbas mining region, where Yanukovych was born in 1950.

It is impossible to penetrate the imposing perimeter of Yanukovych's residence here at 65 Rainissa Road, ringed by pine trees and a huge brick and cement wall topped with a metal barrier.

No one answers the buzzer next to the imposing brown door. A guard house with tinted windows also looks empty.

Only the bark of a dog breaks the heavy silence that surrounds this luxury island in the middle of nowhere.

The former president is wanted for "mass murder" after the violence in Kiev last week left nearly 100 dead, prompting his ouster and the collapse of his entire government.

On Tuesday, parliament approved a resolution calling for him to be charged with crimes against humanity by the International Criminal Court in The Hague.

Wild rumours have circulated since Yanukovych fled his presidential palace in Kiev at the end of a bloody week in which nearly 100 anti-government protesters were killed.

With his allies deserting him in the wake of his brutal crackdown, Yanukovych has only been seen in a brief televised statement in which he denounced the events as a "coup" and likened the protesters to "neo-Nazis".

Acting Interior Minister Arsen Avakov wrote on Facebook that Yanukovych had tried to flee the country on Saturday out of Donetsk airport, before escaping to Crimea with a team of guards and a cache of weapons the next day.

But many in Donetsk believe he is still in the vicinity.

"I think he is in Donetsk and that he's hiding," said Mark, a student on the huge Lenin Plaza where a few dozen were demonstrating against the revolution on Tuesday.

Others claim he is in Sevastopol, the Crimean port city that is home to Russia's Black Sea navy.

Or perhaps he has already escaped the country? No one knows for sure.

One thing is certain: he has few supporters left in Donetsk, his former fiefdom where he ruled as governor from 1997 to 2002.

Dmitri, a 22-year-old student, summed up the mood: "His escape from Kiev was an act of treason. He has abandoned his people."