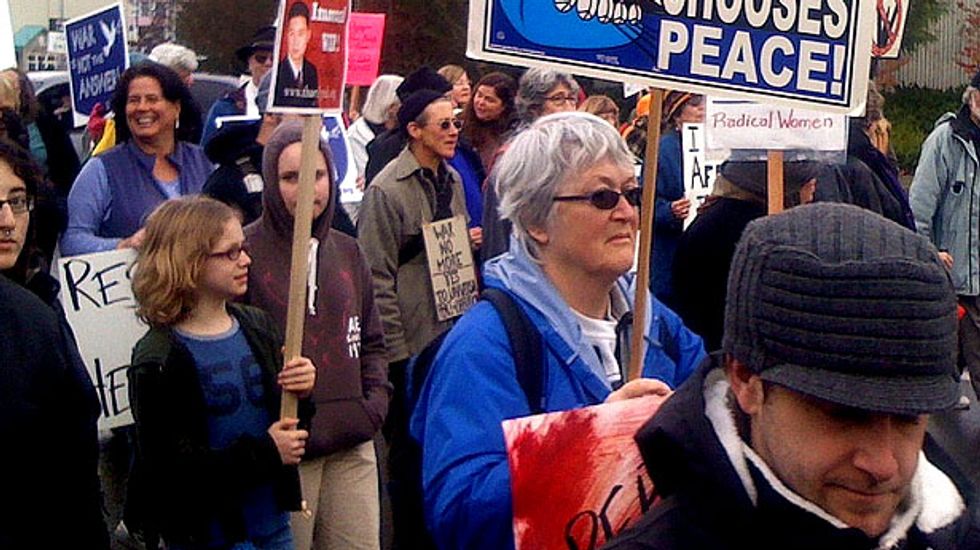 New records obtained by the Defending Dissent Foundation prove that the United States Army used a multi-agency spy network to gather intelligence on nonviolent, antiwar protesters and to disseminate their findings to both the FBI and local police departments.

Activists filed a lawsuit against Thomas Rudd and John Towery -- Panagacos v. Towery -- in 2007, alleging that the U.S. Army had directed operatives to infiltrate and collect information about the activist movement in the Washington area.

According to the newly released documents, the U.S. Army paid Towery, a Criminal Information and Systems Officer, to spy on the antiwar group Port Militarization Resistance (PMR), as well as the Students for a Democratic Society, the Industrial Workers of the World, and Iraq Veterans Against the War.

In an email from November 2007, Towery wrote to a number of people he had met at a Domestic Terrorism (DT) conference in Spokane, Washington that "it would be a good idea to develop a leftist/anarchist mini-group for intel sharing and distro."

Towery seemed very concerned that existence of this "mini-group" would become public knowledge. "[W]e will need to look at the third party rules and each individuals [sic] agency policy about email," he wrote, because "[e]ven open source information and files should not be distributed, because it might tip off groups that we are studying their techniques, tactics and prcedures."

Larry Hildes, a National Lawyers Guild attorney who filed the Panagacos lawsuit in 2010, said that "[t]he latest revelations show how the Army not only engaged in illegal spying on political dissidents, it led the charge and tried to expand the counterintelligence network targeting leftists and anarchist."

In a 2009 sworn statement, Towery denied that the Army had any involvement in his activities. "I was concerned at the outset that what I was doing should be legal and that the Fusion Cell [of Army, FBI, and local police departments] should not get in trouble because of what I was doing," he said.

"Additionally I took steps to ensure that all of my activities would be conducted on my off-hours," he continued. "For example, I would occasionally be contacted by one of the protesters during office hours on my cell phone; but I would wait to return the call until I was on a break or at lunch."

The email obtained by the Defending Defense Foundation was sent from Towery's us.army.mil address, and was sent at 10:16 a.m.