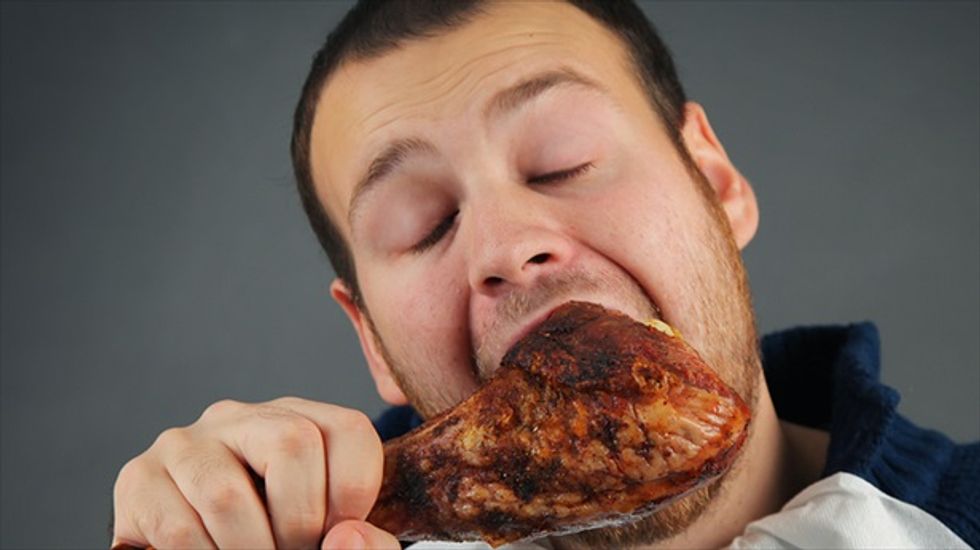 Toxic chemicals found at high concentrations in fried and grilled meats may raise the risk of diabetes and dementia, researchers say.

U.S. scientists found that rodents raised on a Western-style diet rich in compounds called glycotoxins showed early signs of diabetes, along with brain changes and symptoms that are seen in Alzheimer's disease.

The findings matched what the researchers saw in a small number of older people, where those with higher levels of glycotoxins in their circulation had memory and other cognitive problems, and signs of insulin resistance, which precedes diabetes.

The results are tentative, but if confirmed by other studies, the work could transform hopes for tackling two major diseases that have reached epidemic proportions in the developed world.

The study suggests that changes in cooking practices might lower the risk of both diabetes and dementia, while a greater understanding of the biological mechanisms could lead to drugs that delay their onset.

"The findings are very promising, but the question that needs to be answered is whether cutting down on glycotoxins can prevent or reverse dementia," said Helen Vlassara, who led the study at the Icahn School of Medicine at Mount Sinai in New York.

Vlassara raised groups of mice on diets that differed in their levels of a type of glycotoxin called advanced glycation end products, or AGEs. Animals that ate a Westernised diet rich in AGEs experienced a build-up of protein called amyloid in their brains, and developed cognitive and movement problems typical of dementia. The same changes were not seen in mice raised on a low-AGEs diet.

The researchers then turned to 93 healthy humans aged over 60. Over nine months of the study, they found that those with higher levels of AGEs in their bloodstream experienced greater levels of cogntive decline and insulin resistance. Details are published in Proceedings of the National Academy of Sciences.

Glycotoxins are widespread in animal products, including meat and dairy produce, and levels increase when food is fried, grilled, pasteurised or smoked, making them abundant in Western diets.

The sheer ubiquity of glycotoxins means dietary changes might not be easy or effective as public health interventions, but Vlassara said that cooking foods differently might help. Levels of glycotoxins rise when food is cooked dry at high temperature, but moisture prevents this.

"People will grill bacon and fry eggs for breakfast, or have a toasted bagel or muffin. But they could boil or poach the eggs, and have fresh bread. With meat, we recommend stewing and boiling, making sauces instead of exposing meat to very high dry heat," she said.

For some scientists, the most exciting part of the study is the potential explanation of how diabetes and dementia might be linked. Diabetes is one of the few concrete risk factors for dementia, and doubles the risk of a person developing the disease, but how the two are connected has remained a mystery. Vlassara found that rodents and humans on a high glycotoxin diet had low levels of SIRT1 in the body, a protein that is thought to protect the brain from neurodegeneration.

Simon Lovestone, a neuroscientist and leader of the dementia translational research collaboration at Oxford University and King's College London, said the finding was "fantastically interesting" but added that further studies were needed in people to see if reducing dietary glycotoxins staved off dementia.

Doug Brown, director of research and development at the Alzheimer's Society, said: "We are often told that burgers or fried chicken are bad for us and this study is not the first to link the chemicals in some cooked foods to Alzheimer's. However, this research adds to our understanding of how they might work and makes a strong case for further research.

"Diets with low levels of the compounds show promising effects in mice and should be further explored as a way to prevent dementia through changes in diet," he added. "Of course, we must not forget that the majority of research was conducted in mice and the human element of this study is too small to draw any conclusions.

"Evidence suggests that the best way to reduce your risk of developing dementia is regular exercise, not smoking, and following a healthy diet."

Derek Hill at University College London said the results were compelling and should encourage more work. "It is notoriously difficult to do experiments on mice that properly mimic Alzheimer's disease in humans," he said. "But it is grounds for optimism. This paper adds to the body of evidence suggesting that using preventative strategies might reduce the prevalence of Alzheimer's disease and other dementias in society. And that could have a very positive impact on us all."

Tom Dening, professor of dementia research at Nottingham University, said: "Foods high in protein and fat, such as meat, cheese, and egg yolk, are rich in AGEs, and cooking at high temperatures, for example frying and barbecues, increases AGEs. Dietary restriction of AGEs can bring about significant reductions. What isn't yet clear is how much these effects contribute to Alzheimer's disease compared to other factors, and we don't know whether dietary restriction of AGEs would be helpful in prevention."