Researchers: One out of every 14 women worldwide has suffered sexual assault 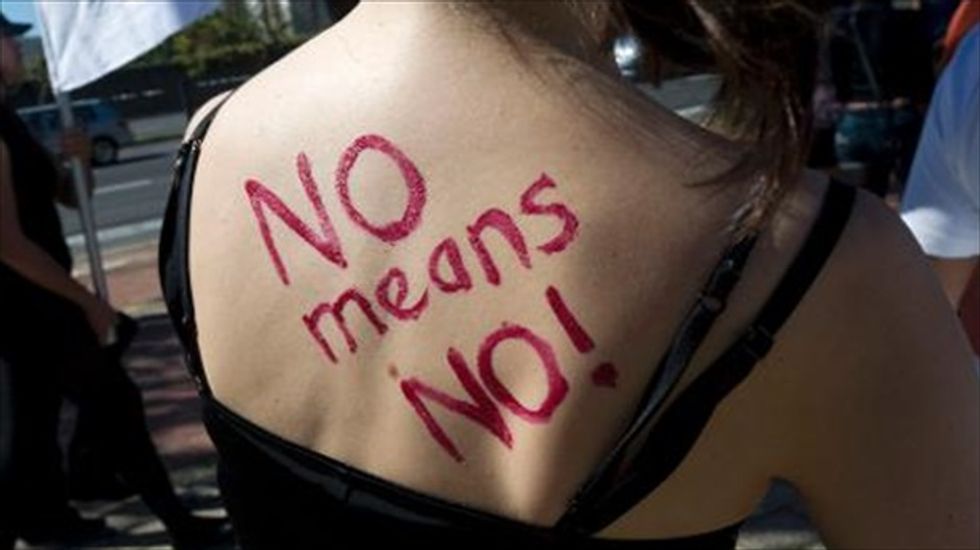 Photo taken on August 20, 2011, in Cape Town shows 'No means No' written on the back of a woman as more than a thousand people march through the city [AFP]

Worldwide, one woman in 14 has been sexually assaulted by someone other than a partner, according to the first global estimate of the problem, published on Wednesday.

Its authors said that despite important gaps in data, the overall picture was clear: sex attacks on women are a big and widely overlooked problem.

Reporting in The Lancet, researchers carried out an overview of investigations in 56 countries.

Their data was trawled from scientific journals as well as "grey" literature, meaning reports in publications that may not be peer-reviewed, an acknowledged benchmark of research.

Overall, 7.2 percent of women aged 15 years or older told interviewers they had been sexually attacked at least once in their lives by someone who was not their intimate partner.

"Our findings indicate a pressing health and human rights concern," the investigators said.

The highest rates were in sub-Saharan Africa -- 21 percent in the centre (Democratic Republic of Congo) and 17.4 percent in the south (Namibia, South Africa and Zimbabwe) -- followed by 16.4 percent in Australia and New Zealand.

The lowest reported prevalence was in South Asia (India and Bangladesh) at 3.3 percent and north Africa and the Middle East with 4.5 percent.

Within Europe, three countries in the east (Lithuania, Ukraine, Azerbaijan) had a lower level of sexual assault (6.9 percent) than countries in the centre (10.7 percent) and west of the continent (11.5 percent). The figure for North America was 13 percent.

"We found that sexual violence is a common experience for women worldwide and in some regions is endemic, reaching more than 15 percent in four regions," said lead investigator Naeemah Abrahams of the South African Medical Research Council in Cape Town.

The true tally of sexual violence may be far higher in some regions, she said, pointing to South Asia in particular.

The wide differences between regions could be explained by varying levels of disclosure, the authors said, noting cultures in which victims of sexual violence are stigmatised and likelier to conceal their ordeal.

In an email exchange with AFP, Abrahams acknowledged the study's limitations.

Data were good from most of Europe, Oceania, Australasia, North America and Southeast Asia, but sketchy or lacking in parts of South Asia, north and central Africa and the Middle East. Some countries had no data at all.

Also, the definition of sexual violence was determined by the authors of the original studies, and was not standardised.

But most studies used a common, broad question, of the kind: "Were you ever forced to have sex or perform a sexual act when you did not want to with someone other than your partner?"

Abrahams described the paper as providing a basis for health watchdogs and policymakers to tackle sexual violence against women.

"A prevalence of 7.2 percent is a big enough problem for any country to be concerned about the experiences of their female citizens," she said.