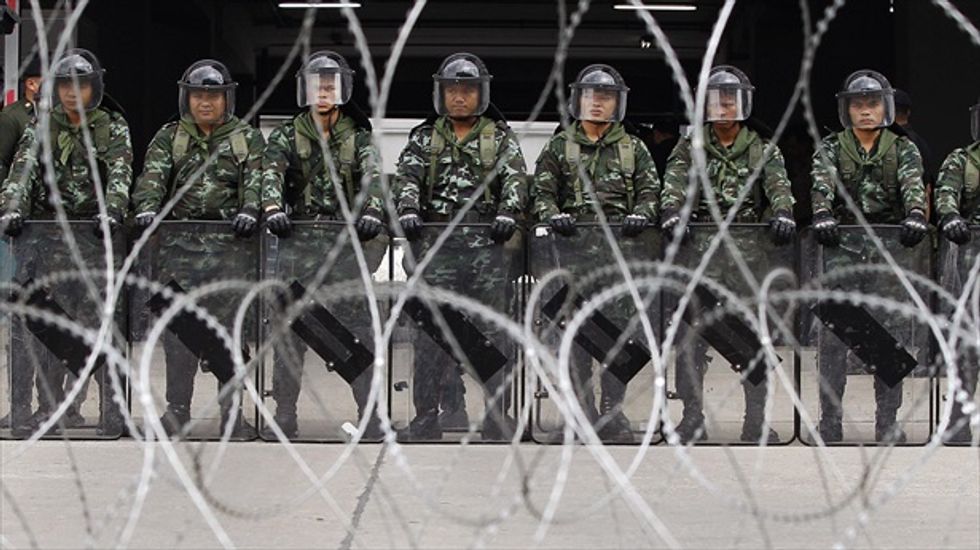 BANGKOK (Reuters) - Lines of Thai riot police confronted anti-government protesters blocking the government's headquarters in Bangkok on Tuesday after authorities said they would renew an operation to retake several sites occupied by demonstrators for weeks.

The protesters have been rallying since November in a bid to oust Prime Minister Yingluck Shinawatra, whom they view as a proxy for her elder brother, Thaksin Shinawatra, a former premier toppled in a military coup in 2006.

Bluesky TV, the protest movement's own television channel that broadcasts the fiery speeches of its leader, Suthep Thaugsuban, showed live pictures of ranks of police with shields near Government House in central Bangkok.

Demonstrators were massed a few hundred meters away, the two sides separated by sandbag barriers constructed by the protesters. There were no clashes.

Labour Minister Chalerm Yoobamrung, who is in charge of the security operation, has said police would reclaim protest sites near Government House, the Interior Ministry, the Energy Ministry and a government administration complex in north Bangkok.

The protests are the latest installment of an eight-year political battle broadly pitting the Bangkok middle class and royalist establishment against the poorer, mostly rural supporters of Yingluck and her billionaire brother Thaksin.

Demonstrators accuse Thaksin of nepotism and corruption and say he used taxpayers' money for populist subsidies and easy loans that have bought him the loyalty of millions in the populous north and northeast.

Yingluck has been forced to abandon her office in Government House by the protesters, who have also blocked major intersections in Bangkok's shopping and business districts since mid-January.

[Image: Soldiers hold their shields as they guard the temporary office of Thai Prime Minister Yingluck Shinawatra during a protest in Bangkok Feb. 17, 2014. By Chaiwat Subprasom for Reuters]