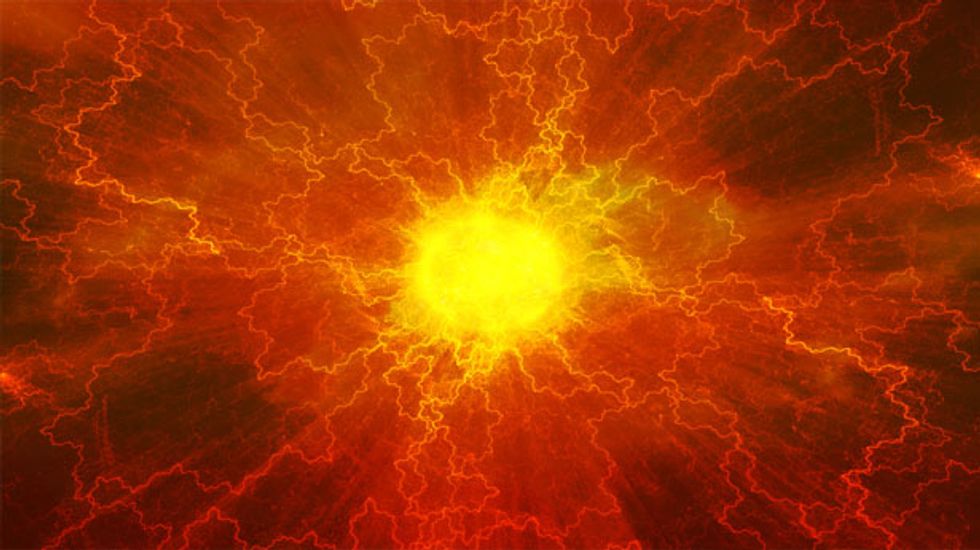 For the first time, experiments have produced more energy from fusion reactions than the amount of energy put into the fusion fuel, scientists at the federally funded Lawrence Livermore National Laboratory in California said.

The researchers, led by physicist Omar Hurricane, described the achievement as important but said much more work is needed before fusion can become a viable energy source. They noted that did not produce self-heating nuclear fusion, known as ignition, that would be needed for any fusion power plant.

Researchers have faced daunting scientific and engineering challenges in trying to develop nuclear fusion - the process that powers stars including our sun - for use by humankind.

"Really for the first time anywhere, we've gotten more energy out of this fuel than was put into the fuel. And that's quite unique. And that's kind of a major turning point, in a lot of our minds," Hurricane told reporters.

"I think a lot of people are jazzed."

Unlike fossil fuels or the fission process in nuclear power plants, fusion offers the prospect of abundant energy without pollution, radioactive waste or greenhouse gases.

Unlike the current nuclear fission energy that is derived from splitting atoms, fusion energy is produced by fusing atoms together.

Experts believe it still will be many years or decades before fusion can become a practical energy source.

"I wish I could put a date on it," said Hurricane. "But it really is (just) research. And, you know, although we're doing pretty good, we'd be lying to you if we told you a date."

Of the uncertain path ahead in fusion research, Hurricane compared it to "climbing half way up a mountain, but the top of the mountain is hidden in clouds. You can't see it. You don't have a map".

The research was conducted at the laboratory's National Ignition Facility (NIF), which was completed in 2009.

The scientists used 192 laser beams to zap a tiny target containing a capsule less than a tenth of an inch (about 2 mm) in diameter filled with fusion fuel, consisting of a plasma of deuterium and tritium, which are two isotopes, or forms, of hydrogen.

The fuel was coated on the inside of the capsule in a frozen layer less than the width of a human hair.

The experiments, published in the journal Nature, created conditions up to three times the density of the sun.

In two experiments described by the researchers that took place in September and November of last year, more energy came out of the fusion fuel than was deposited into it, but it was still less than the total amount deposited into the target.

The deuterium-tritium implosions were more stable than previously achieved. The researchers did so by doubling the laser power earlier in the laser pulse than in earlier tries.

The fusion-energy yield was increased by about tenfold from past experiments, in a series that started last May. One of the experiments produced more than half of the so-called Lawson criteria needed to reach ignition - but only about one-100th of the energy needed for ignition.

Lawrence Livermore National Laboratory, located about 45 miles east of San Francisco, is overseen by the National Nuclear Security Administration, an agency of the U.S. Department of Energy.

Eager to exploit the potential this type of energy offers to reduce dependence on oil and other fossil fuels, the United States and other nations have invested many millions of dollars into fusion research, often with uneven results.

Other labs like the Culham Centre for Fusion Energy, which is the British national laboratory for fusion research, and the Princeton Plasma Physics Laboratory in New Jersey focus on magnetic confinement fusion energy - putting plasma in a magnetic container and heating it up until nuclei fuse.

Steve Cowley, director of the Culham Centre, called new findings "truly excellent" but said different measures of success make it hard to compare with his type of research.

"We have waited 60 years to get close to controlled fusion, and we are now close in both magnetic and inertial confinement research. We must keep at it," Cowley said in a statement.

Mark Herrmann, a fusion researcher at Sandia National Laboratories in New Mexico which is also overseen by the U.S. National Nuclear Security Administration, called the new findings important, but sees a "very long road to assessing the viability of fusion as a long-term energy source".

"I believe a compact carbon-free energy source is very important for humankind in the long term," he said by email.

"Fusion is one bet. If it pays off, the return will be big."

(Reporting by Will Dunham; Editing by Sophie Hares)