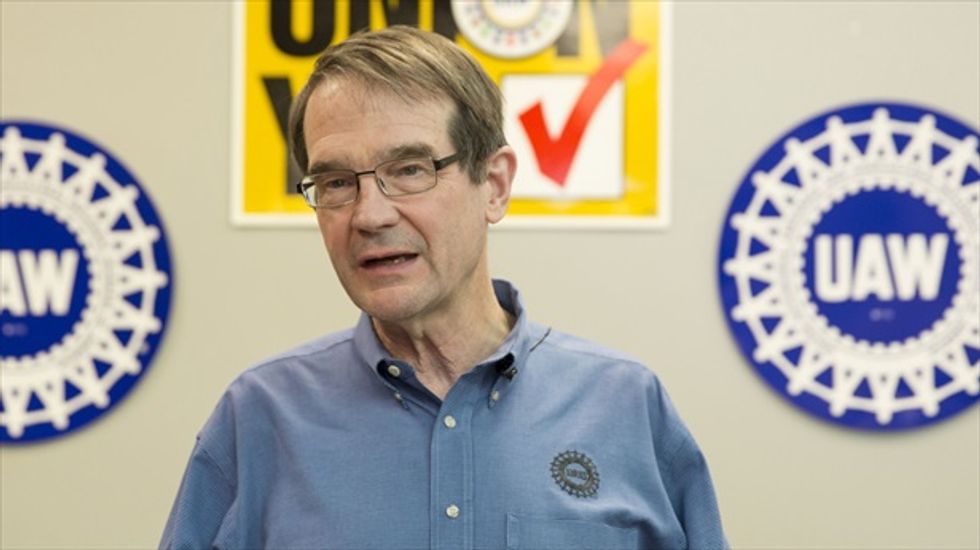 (Reuters) - Five Volkswagen workers moved on Tuesday to undercut the United Auto Workers' appeal to an election that resulted in the union's failure to organize VW's Chattanooga, Tennessee plant earlier this month, an anti-union group said.

In a petition to the National Labor Relations Board, the workers asked to intervene in the UAW's appeal by saying the union and VW are in collusion to bring unionization to the Chattanooga plant.

Not allowing them to intervene "would be akin to allowing two foxes to guard the henhouse" a petition filed on behalf of the workers by the National Right to Work Foundation says.

The UAW on Friday filed the objection to the result of the February 12-14 election, in which VW's Chattanooga workers rejected the union by a 712-to-626 vote. The UAW claimed that outside interference led by politicians such as Republican U.S. Senator Bob Corker improperly influenced worker-voters.

The workers claim that if they are not heard, the company and the union will not present a defense of the vote's result, according to a copy of the petition to the NLRB's regional office in Atlanta that was provided by the National Right to Work Foundation.

"The employee-intervenors must be permitted to intervene because their employer and the UAW are colluding to force unionization onto them and their co-workers," said the petition to the NLRB.

The National Right to Work Foundation is offering free legal assistance to the five workers.

"Any interests the UAW or Volkswagen possess are secondary to those of the employee-intervenors and their fellow employees who voted against unionization," and they "must" be allowed to intervene, the petition says.

The five workers are among eight who filed charges with the NLRB last fall against the UAW, saying that the union coerced and misled workers to sign cards supporting the UAW. The NLRB's staff dismissed those charges on January 23.

In the petition, the National Right to Work Foundation's attorneys appended the agreement between Volkswagen and the UAW to hold the secret ballot election at the Chattanooga plant, citing it as an example of the collusion between company and union.

The UAW and VW signed the agreement January 27 to hold the election. The agreement calls for, if the VW Chattanooga workers approved the UAW, the establishment of a works council similar to the ones VW had at all of its major wholly owned plants around the world.

The works council would help decide some work rules at the plant but would not negotiate wages and benefits. Most labor lawyers agree that in order to establish a works council in the United States, a U.S.-based union is needed to keep it from being deemed a company union, which is prohibited under U.S. labor law.