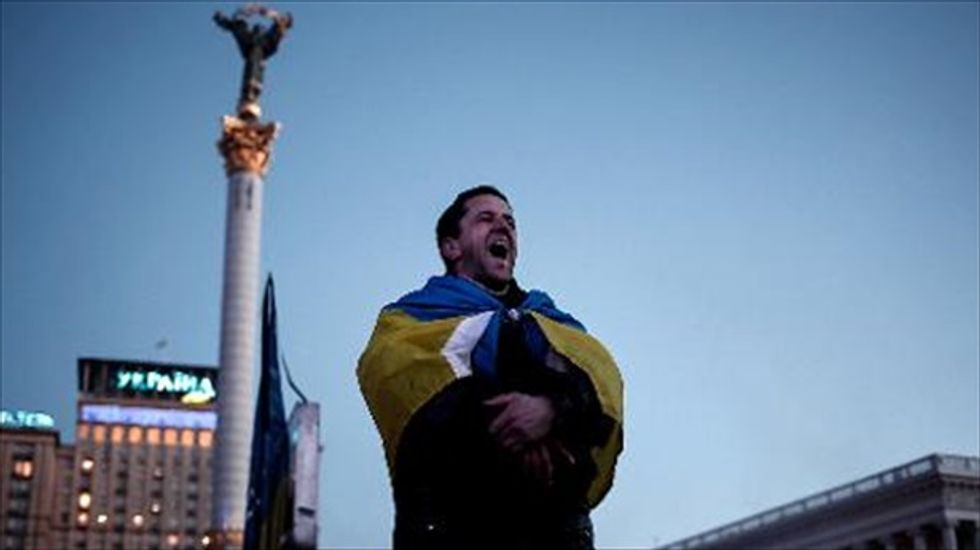 Ukrainian lawmakers failed to agree on curbing the president's powers at a stormy debate on Tuesday as the EU's foreign policy chief flew in to bolster international pressure to end the two-month crisis.

Catherine Ashton dined with opposition leaders and on Wednesday was to meet with President Viktor Yanukovych, who a senior lawmaker said was considering calling early elections to resolve the deadly stand-off.

Parliament will meet again on Wednesday although Yanukovych's Regions Party and the opposition appear as divided as ever.

Ukraine's protests erupted in November after Yanukovych rejected an association agreement with the European Union in favour of closer ties with Moscow, and the turmoil has now become an all-out movement to oust him.

The pro-EU protest leaders are demanding constitutional amendments that would cut presidential powers and unconditional freedom for arrested activists.

But Yanukovych's ruling Regions Party has insisted this can only happen if occupied government buildings are vacated.

In a sign that Yanukovych's position is softening further, his personal representative in parliament, Yuriy Miroshnychenko, told AFP the president was considering "two possible scenarios".

"The first is the release of occupied buildings and an amnesty and the second is early elections. The amnesty is not working out," he said, referring to the release of those arrested in past weeks.

Protesters camped out on Kiev's Independence Square expressed mixed feelings about the possibility of Yanukovych stepping down before the end of his mandate in 2015.

"Until we see a complete change which is not just Yanukovych, people will stand here," said Vasyl, a campaigner from Lviv in western Ukraine.

Bogdan, an activist from Kiev, said: "It would be the best way for us. A full reset of power. Both president and parliament."

At a pro-government camp also in the centre of the capital, 27-year-old Andriy Kucher said Yanukovych's resignation would mean that "the military coup has been successful".

"He was democratically elected," Kucher said.

In parliament, world champion boxer turned protest leader Vitali Klitschko called for an "end to the dictatorship" saying Ukrainians were fed up with corruption.

After meeting Yanukovych, Klitschko said the president told him that constitutional reform could take up to six months.

Opposition MPs chanted "Killers! Killers! Killers!" as the chief lawmaker from the Regions Party, Oleksandr Yefremov, took the floor with an emotional speech in which he blasted the "extremism" of the protesters.

At least two protesters and two policemen have been killed in clashes and the opposition says activists are being beaten by pro-government militias as part of a "secret repression".

Lithuania on Tuesday confirmed signs of torture on a Ukrainian activist it is treating and urged an independent probe into the crime.

Bulatov, who alleges he was kidnapped and "crucified" by unknown assailants, is a criminal suspect in Ukraine and only left on Sunday after a court issued a special permit following intense diplomatic lobbying.

The violence has increased pressure from the international community for a swift solution.

Ashton has raised the possibility of financial aid from Brussels and Washington for Ukraine's recession-hit economy in exchange for democratic reforms but the plan is still vague.

Opposition leader Arseniy Yatsenyuk has asked for a "Marshall Plan" -- a reference to the massive US aid given to Europe after World War II to rebuild and prevent the spread of Communism.

Yatsenyuk said the minimum required would be the $15 billion (11 billion euros) that Russia has promised Ukraine in a critical bailout that is now on hold pending a resolution of the crisis.

But European Commission president Jose Manuel Barroso said on Monday there would be "no bidding competition" with Russia, and EU diplomats hinted the amount would be much lower.

The crisis has sparked tensions between the West, which is considering sanctions against Ukrainian officials, and Russia, which has accused the EU and US of interference in the former Soviet republic.