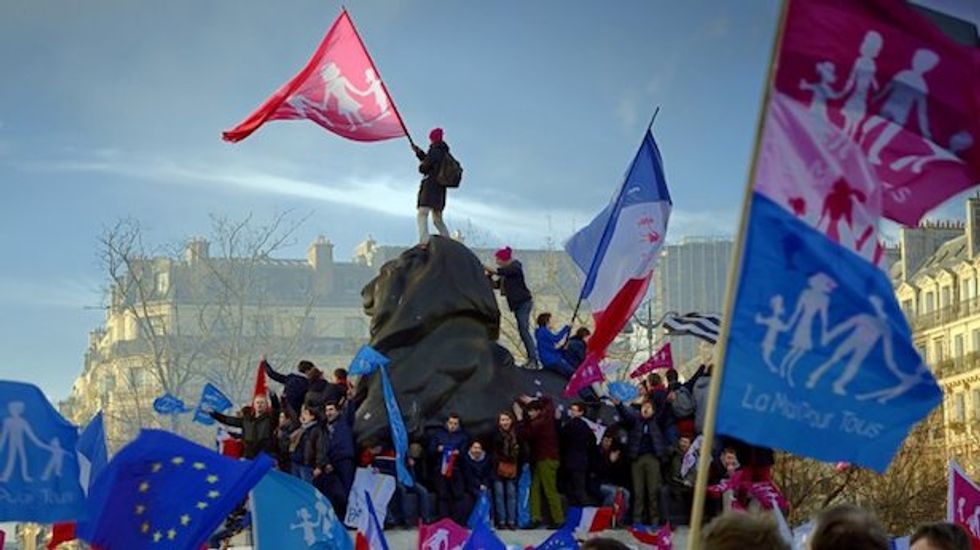 The growing visibility of a staunchly conservative movement in France has prompted comparisons with the Tea Party of the United States.

Interior Minister Manuel Valls has warned that France was seeing the birth of its own version of the grassroots, anti-tax Tea Party movement amid a surge of anti-government demonstrations by right-wing groups and religious conservatives across the country.

“We are witnessing the creation of the French version of the Tea Party. By exploiting the political and leadership crisis on the right, and the National Front party’s move away from the far-right, a conservative and reactionary right has been set free,” Valls, a Socialist, told the Journal du Dimanche in an interview published on Sunday.

The eye-opening comparison came hours ahead of massive rallies in defense of traditional families in Paris and the eastern city of Lyon. They were organized by the so-called “Manif Pour Tous” (Protest for All) group that staged massive protests against gay marriage last year.

Hundreds of primary school students were pulled from their classrooms last week as part of a grassroots campaign opposing a new programme teaching gender equality and tolerance of homosexual parents within public schools.

The call to boycott schools one day per month, answered mostly by conservative Christian and Muslim parents, came on the heels of a “Day of Anger” against the government, which saw around 17,000 people hit the streets of the French capital on January 26.

That protest, in which some shouted anti-Semitic slogans, ended in clashes that wounded 19 police officers and led to the detention of 226 people.

Valls said that voicing opposition to the government was a legal right, but insisted that there was a worrying confluence of “anti-elite, anti-government, anti-tax, anti-parliament, anti-media” ideas that was threatening French democracy.

Their participation appeared to lend credence to Valls’ idea that a new, more radical movement within the political establishment – something akin to America’s Tea Party – is brewing this side of the Atlantic.

For Nicole Bacharan, a national fellow at the Hoover Institution at Stanford University, similarities exist.

“In both movements I see an array of people who feel they are becoming a minority within their own country, who long for a return back to a time when their countries were more traditional, more religious, whiter,” Bacharan told FRANCE 24.

The scholar said that Tea Partiers in the U.S. and people displaying France’s new conservative streak shared mutual feelings of being ignored by the political establishment and the media, but that sentiment was even more acute in France.

“In the United States there is more room for Tea Party members to express themselves, like on [the cable TV channel] Fox News,” Bacharan noted. “In France no news outlet takes sides in such a partisan way, and it’s true that the French media tends to look down on these movements as (being) something kind of backwards.”

If a nativist bent unites the allegedly kindred movements in Paris and Washington, observers said one key issue keeps them miles apart: the vision of a limited government.

“The Tea Party rejects big government, and often evokes ideas of the founding fathers as the basis for its principles … even their name suggests this,” said Thomas Snegaroff, a U.S. expert at France’s Institute for International and Strategic Studies.

In France few, if any, political movements disagree with a strong, central government.

Detractors of Hollande’s left-leaning government do not have the same “historical anchor” as the Tea Party, making “more religious or biological” arguments the basis for their struggle, according to Snegaroff.

A threat to its own camp?

While the Tea Party has successfully endorsed Republican candidates, sent a handful of them to Congress, and made its mark on US domestic policy, it remains unclear if the “Manif Pour Tous” can have a similar impact in France.

The French government’s decision this week to abandon its so-called Family Reform, which some expected to include a provision extending in vitro fertilization rights to same-sex couples, was trumpeted as a victory by the conservative band. The back pedalling will anger LGBT groups, but is likely to go unnoticed by the majority of constituents.

No one thinks Hollande’s government, or any future government, will rescind on the 2013 law legalizing gay marriage and adoption.

“It is not clear what political gains they can make in the future, and no serious candidate for public office has yet to emerge from their ranks,” Snegaroff pointed out.

Experts say that so far, radical conservatives in the US and France are mostly a threat to their own extended political families.

“The risk of a staunch conservative discourse is losing more moderate voters, especially women and youth,” Snegaroff said. “The right in France should look at the 2012 elections in the US to draw its own conclusions.”

The Hoover Institution’s Bacharan agrees that France’s Tea Party-like movement has become a real liability to moderate candidates on the right. She sees a prime example in Nathalie Kosciusko-Morizet, the centrist UMP candidate who hopes to reclaim the Paris mayor’s office from the Socialist Party this spring.

“It’s quite obvious the ‘Manif Pour Tous’ is making her life more complicated. The most recent polls show she is going to lose, and it’s because the right is becoming more conservative, it’s moved beyond her own positions,” Bacharan said.