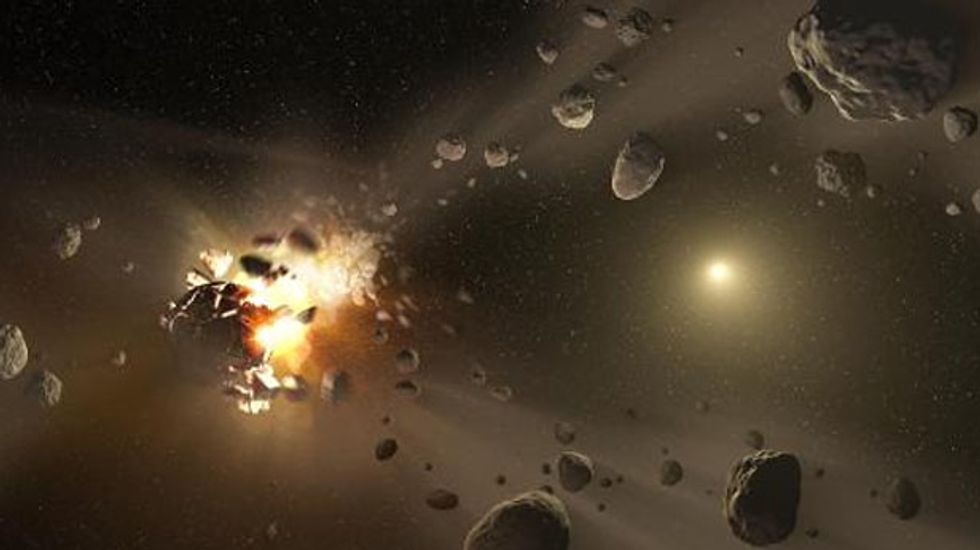 Astonished astronomers said Wednesday they had found rings around an asteroid, the smallest object known to have this feature and only the fifth after Jupiter, Saturn, Uranus and Neptune.

The twin rings around a rock called Chariklo were spotted in June last year as it passed in front of a star, scrutinised by seven telescopes dotted over a 1,500-kilometre (930-mile) stretch of South America.

As expected, the star seemed to vanish for a few seconds as Chariklo blocked its light -- a phenomenon known as occultation, an international team reported in the science journal Nature.

But the mini-eclipse turned out to be much more than the astronomers were expecting.

"A few seconds before, and again a few seconds after the main occultation, there were two further very short dips in the star's apparent brightness," the European Southern Observatory (ESO) said in a statement.

"Something around Chariklo was blocking the light!"

It turned out to be two narrow, dense rings -- a feature believed to be limited to the four giant planets of our Solar System.

By comparing data from the different sites, the team not only reconstructed the shape and size of Chariklo itself but also the shape, width and orientation of its twin halos.

These were seven and three km (4.3 and 1.8 miles) wide respectively, separated by a nine-km gap. Like Saturn's rings, Chariklo's may be composed of water ice.

"We weren't looking for a ring and didn't think small bodies like Chariklo had them at all, so the discovery, and the amazing amount of detail we saw in the system, came as a complete surprise," said Felipe Braga Ribas of Brazil's National Observatory.

Chariklo, a lumpy 250-km-wide rock discovered in 1997 and named after a water nymph in Greek mythology, orbits the Sun between Saturn and Uranus, more than a billion kilometres from Earth.

It is a Centaur, a category of celestial bodies that share the characteristics of comets, which are made of ice and dust and form tails when they pass near the Sun, and asteroids which are made of metallic rock, have shorter orbits and tend to cluster in groups.

Centaurs have unstable orbits that cross those of the giant planets and live for a few million years. Like other "minor planets", they are not massive enough for their own gravity to pull them into a near-spherical shape.

The origin of Chariklo's rings are a mystery for now, but may be the result of a debris-releasing collision with another body.

"I try to imagine how it would be to stand on the surface of this icy object... and stare up at a 20-km-wide ring system 1,000 times closer than the Moon," said fellow researcher Uffe Grae Jorgensen of the University of Copenhagen's Niels Bohr Institute.

The debris may eventually become welded together into a single, larger moon orbiting Chariklo -- one of the theories for how our own Moon was formed.

Studying occultations is the only method astronomers have to determine the size and shape of bodies so far from Earth that even with the best telescopes they appear as faint points of light.

The rings around Uranus and Neptune were found in the same way, in 1977 and 1984. Galileo, in 1610, became the first person to observe the brilliant rings of Saturn, while the dusty rings around Jupiter were first spotted by the US probe Voyager 1 in 1979.

The project leaders have named Chariklo's rings after the Brazilian rivers of Oiapoque and Chui, but the epithets have yet to be confirmed by the International Astronomical Union (IAU).

In a separate study in Nature, astronomers said they had found a second planet-like body in what was long thought to be an uninhabited zone beyond the orbit of Pluto.

The remote area, said to represent the outer edge of our Solar System, is a supposed repository of comets known as the Oort Cloud.

Only one other body, a 1,000-km-diameter dwarf dubbed Sedna, has been spotted in what is thought to be the inner region of the hypothetical "cloud".

The newcomer, spotted by the Cerro Tololo Inter-American Observatory's four-metre telescope in Chile, has been dubbed 2012 VP.

The point of its orbit closest to the Sun is about 80 astronomical units (1 AU = the distance from the Sun to Earth). Neptune is the furthest planet from the Sun at 30 AU.

"2012 VP is the smoking gun for the existence of the inner Oort Cloud," Megan Schwamb of the Institute of Astronomy and Astrophysics in Taipei, wrote in a comment.