Abandoned in a palace, Central African militia waits for orders 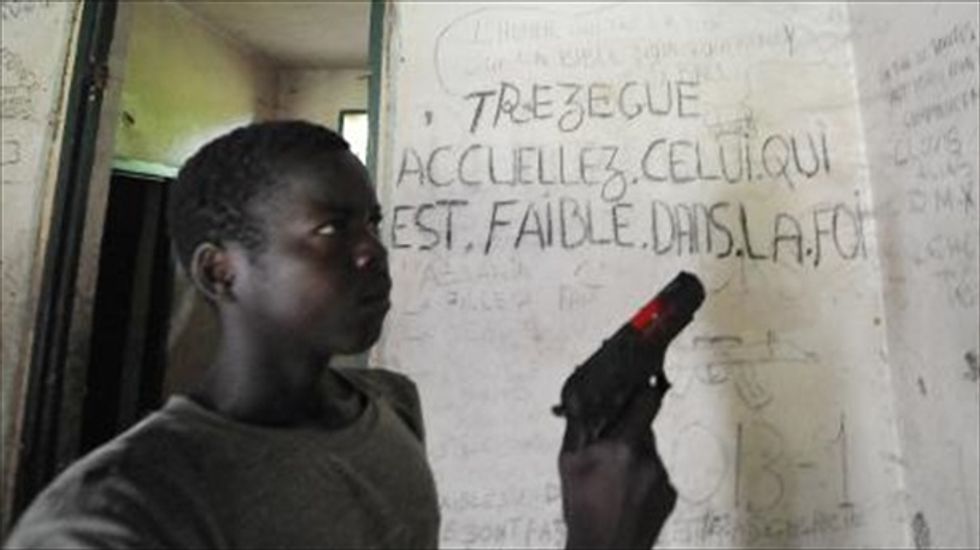 A member of the ex-Seleka rebels poses with a fake weapon in a room of late Central African emperor Jean-Bedel Bokassa's palace in Berengo, on March 3, 2014 [AFP]

Abandoned by their superiors, hiding from their enemies, several hundred Christian militiamen in the Central African Republic find themselves holed up in an abandoned palace, left to train with wooden Kalashnikovs and hunt mice for food.

Once home to self-styled emperor Bokassa I in the 1970s, the crumbling palace at Berengo, some 30 kilometres (50 miles) outside the capital Bangui, is consumed by undergrowth.

The gilt and white paint of the once-grand "imperial court" peels off the walls, rotting from damp. The vaulted ceilings are a haven for bats.

Its sprawling grounds appear deserted at first glance, until a line of men emerges in formation.

Around 50 take position in front of a swimming pool full of green sludge. A drill sergeant in shorts and a football top cries out: "Present Arms!"

The men follow the orders to the letter, but one detail stands out: the arms being presented are not real. The Kalashnikovs are made of wood, the rocket-launcher is a water-pipe, the mortars would not hurt a mouse.

These men were supposed to support the government of Michel Djotodia, who seized power in a coup last year with the help of his Seleka militia.

"It was president Djotodia who brought us here to give us military instruction," one of their number, 23-year-old Louis Degon Zambakoumba, told AFP later. "We have finished our training and we have been waiting ever since."

Unable to staunch an outbreak of sectarian violence between Muslims and Christians, Djotodia was forced to step down by the international community in January. His supporters have since faced brutal reprisals by an opposing anti-balaka ("anti-machete") militia.

While most of Djotodia's Seleka rebels were Muslims, the group stationed at the abandoned palace are all Christians. They numbered around 1,200 when they arrived in April 2013.

In December, officers and instructors fled the palace as the mostly Christian anti-balaka militia approached.

A shared religion meant the palace trainees were not immediately targeted, but it is still too dangerous to venture far beyond the palace grounds.

"We are all Christians: Catholics or Protestants. There isn't a single Muslim here. But because of the troubles, we cannot leave," said Zambakoumba.

Out on the terrace, next to the carcass of a water slide by the pool, some men are cooking foraged roots. Another arrives with a mouse dangling from a wooden trap. They catch around 150 every day.

Other regular items on the menu: toads and fish from the pond.

"We sleep on cardboard boxes, we eat like pigs -- our daily lives are catastrophic," said 24-year-old Patrick Mbetissinga. "But we are clean because we are soldiers."

They also nourish themselves on the hope that they will one day be integrated into the national army.

"We are sons of the country and we are well-trained militarily. They cannot abandon us," said Barnabe Metefara, 28.

Several kilometres away, at an anti-balaka check-point, there is sympathy for the fate of these Seleka Christians.

"They are born Central Africans, they want to work with us. They are the good Seleka -- not the bad Seleka that pillage and ransack," said Corporal Manou Mana.

A local village mayor, who has been in place for two decades, remembers the dilapidated palace when it was a "jewel" of Bokassa's regime.

A former non-commissioned officer in the French army, Bokassa seized power and appointed himself president in 1972. Five years later, he took the title of "emperor", as his eccentric regime descended into megalomania and violence -- including claims that he ate some of his victims.

He was forced from power in 1979 after his personal guard massacred a hundred student protesters.

The mayor said the men now stationed at Bokassa's former palace must be brought into the fold.

"We must work for their integration into the army," he told AFP. "They have nothing, and it can only create more instability if we abandon them."