After decades of racial bias, veterans of color receive Medals of Honor 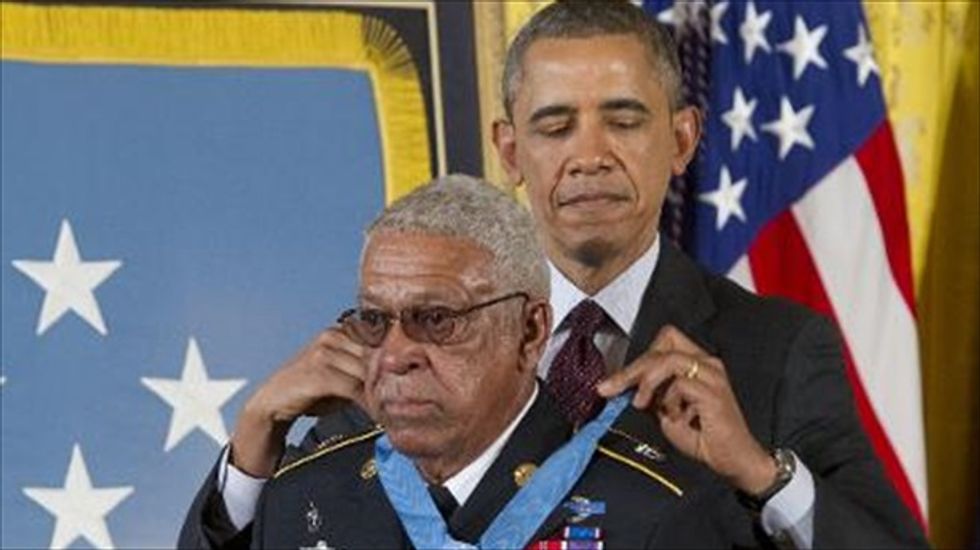 President Barack Obama awards the Medal of Honor to Staff Sergeant Melvin Morris for actions in the Vietnam War during a ceremony in Washington on March 18, 2014 [AFP]

Two dozen U.S. veterans dodged bullets and grenades in military heroism, but were only Tuesday recognized with the most prestigious US combat award after being denied for decades due to racism.

The Hispanic, black and Jewish soldiers served during the Vietnam, Korean and Second World Wars. Ten died during the wars. One remains missing after serving in Korea. And only three were still alive Tuesday to receive their Congressional Medals of Honor.

"When you read the records of these individuals, it's unimaginable the valor that they displayed," President Barack Obama said at the White House ceremony.

"Running into bullets. Charging machine gun nests and climbing aboard tanks and taking them out. Covering their comrades so they could make it to safety ... Manning their posts, some to their very last breaths so that their comrades might live."

The veterans were awarded the medals after a large-scale Pentagon archive review of Jewish and Hispanic American war records, ordered by Congress in 2002. The investigation swept up deserving veterans from other demographics along the way.

Obama said the ceremony, honoring the single largest pool of medal recipients since World War II, was a "chance to set the record straight."

"No nation is perfect. But here in America, we confront our imperfections and face a sometimes painful past -- including the truth that some of these soldiers fought and died for a country that did not always see them as equal."

Other medals were accepted posthumously by family members, many growing teary as they listened to the recounting of their fathers, grandfathers, uncles, and brothers' heroic acts.

The soldiers had all received the second most prestigious medal for their respective military branch.

Because of prejudice, Obama said, many had not been offered the Medal of Honor.

Among the posthumous recipients was Leonard Kravitz, who fought in Korea in the 24th Infantry Division, and who is also the uncle and namesake of U.S. singer Lenny Kravitz.

He was decorated for his bravery as an assistant machine gunner during combat in Yangpyong, Korea on March 6 and 7, 1951.

"He won the Purple Heart but should have gotten the Congressional Medal of Honor," Lenny Kravitz told The New York Times Magazine in December.

"He saved an entire platoon. The fact that he was a Jew was the reason he didn't get it, to be frank."

The Medal of Honor has been awarded to US soldiers since 1863 for acts "above and beyond the call of duty." Because of the criteria, it is often awarded posthumously.