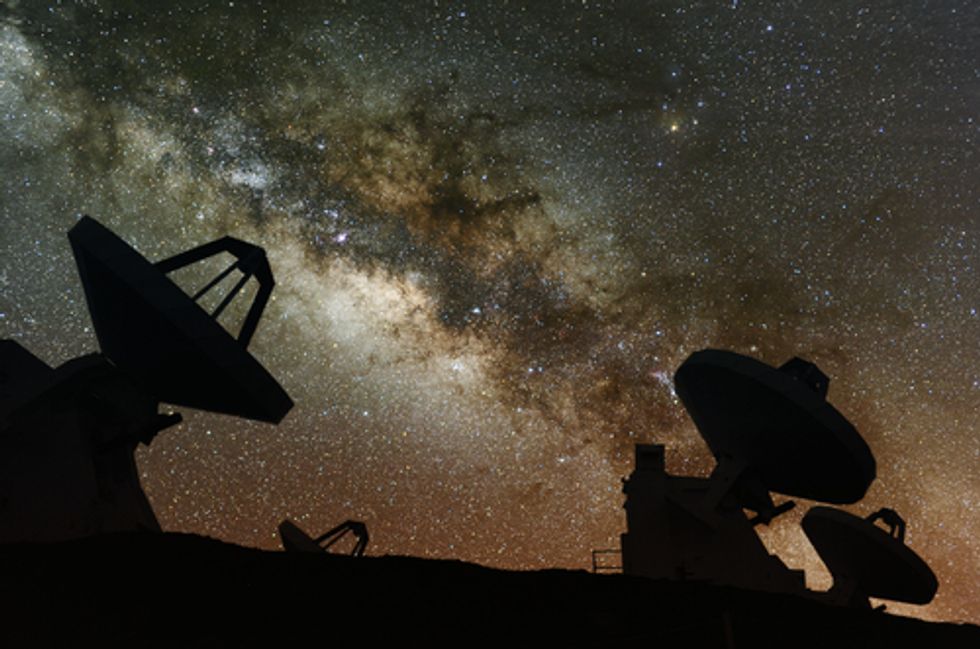 It's hard to believe it's an accident, I'll say that much. The Fox affiliate---not Fox News, but just Fox---in Oklahoma City cut out the last 15 seconds of the airing of the new version of Cosmos featuring Neil deGrasse Tyson, which just happened to be when he mentioned that human beings evolved just recently in relation to the universe.

You can click the link to see the original clip. If this was intentional and not a mistake, so many questions arise, starting with, "Well, how will they deal with the next episode?" You know, the one he was talking about that's coming up next, where the history of human evolution promises to be dealt with at length? Or why was this particular 15 seconds more offensive to fundamentalist sensibilities than the entire segment leading up to it, which is about the age of the universe, which is just as lethal a scientific theory to the biblical understanding of humanity as the theory of evolution is.

Not that this contradiction suggests anything, really, about whether this was an accident or deliberate. One of the things I find most peculiar about the creationist movement is they focus so much on attacking biologists when, if you really think about it, astrophysics has come up with ideas that are far more destabilizing to religious ideas about where we come from and what the relationship between humanity and God is like. In fact, one of the biggest segments of the show, the story of Giordano Bruno, was about precisely that: The Spanish Inquisition was deeply threatened by his idea that the stars are other suns with other planets and that the universe is vast and perhaps infinite, as well they should have been. They correctly surmised that it is pretty hard to believe in a special purpose for human beings in a universe that big, when we're so small in it. It just doesn't make sense. Why would God created billions of stars and give each of them their own solar system of planets, all for the purpose of making a bunch of hairless primates with large brains on one single solitary planet worship him?

When you think about it that way, evolution is much easier to reconcile to religion. It makes somewhat more sense that God would have humans evolve out of other creatures on this single planet than he would make billions of stars and planets---and perhaps even other universes---for no reason at all. At least evolution could be reframed as purposeful in some sense. Our relative smallness compared to the universe, however, is impossible to reconcile.

And yet creationists have latched onto evolution. There are some attempts to challenge astrophysics and geology, which also uphold the theory of a very old Earth and very old universe, but most of the efforts are focused on evolution. Charles Darwin is a villain in fundamentalist circles, but the scientists who helped develop these other theories are mostly ignored. (Hey, I don't know their names, either!) Even the Discovery Institute's newsletter is called Evolution News and Views.

Interestingly, they lambasted Cosmos for the Bruno segment, and it showed the disjointed, illogical thinking that characterizes the fundamentalist approach to science. They don't want to be seen as anti-science, but they still found the segment offensive, understanding, correctly, that it was there to highlight the dangers attendant when religion tries to stifle scientific ideas that may threaten its dogma. The correct reaction to this provocation, of course, would have been to pretend that it has nothing to do with them. After all, their "official" stance is that they question the science of evolution, and therefore they should be equally outraged as any other viewer that this man was persecuted and martyred for floating a theory---that the universe is huge---that they themselves do not dispute.  Instead, they threw a fit and tossed out a pointless red herring, whining that it was unfair to use Bruno's story because he was burned for religious heresy and not because he was a scientist. But that's something deGrasse Tyson points out in the show. The official designation of Bruno isn't the issue---the fact that he was punished for asking hard questions the church found threatening is. If they were smart, the Discovery Institute would applaud Cosmos for telling this story, reiterate how much they value the importance of asking hard questions (even if those questions trouble religion), and reiterate their obviously false claim that their criticisms of evolutionary theory are scientific in nature and not the result of dogmatists refusing to accept science. That they couldn't do that and instead chose to quibble is very telling.

But that really shows how small-minded, even on their own terms, creationists are. They can't conceive of doing anything more than creating a little sideshow or floating a few, narrow criticisms and hoping you don't notice that they can't even handle the overwhelming amount of scientific information pouring in from all sorts of fields that shows their religious beliefs simply can't be true.