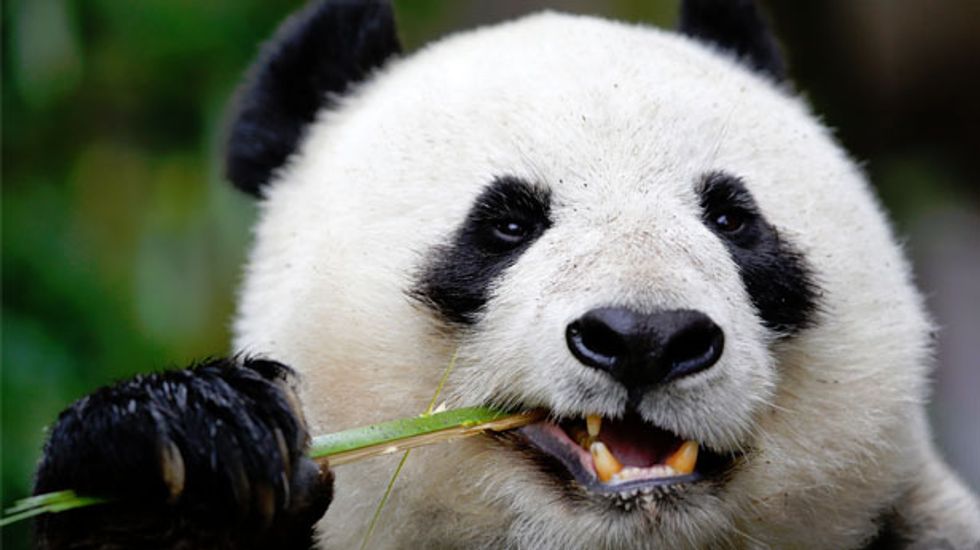 WASHINGTON (Reuters) - Giant pandas eat plenty of veggies, but apparently they like dessert, too.

Scientists studying the endangered black-and-white bears said on Thursday that while pandas almost exclusively eat bamboo, which contains only tiny amounts of sugars, they showed a strong preference for natural sweeteners in an experiment.

The researchers also examined panda DNA and found a match to the same "sweet receptor" gene that humans possess that underpins their ability to taste sugars.

Sweeter foods like fruit may have been part of the natural diet of pandas before human activities helped drive the animals into their current mountainous habitat where those foods are scarce, the researchers said.

"We are a bit surprised. However, given the anecdotal evidence that they like apples, sweet potato and so on in captivity, we are not completely surprised," added Monell molecular biologist Peihua Jiang, another of the researchers.

Pandas, the rarest species of bear, reside primarily in bamboo forests high in the mountains of western China. Understanding what type of food pandas prefer may help determine what nutrients can be used to supplement bamboo in their diet as part of efforts to conserve them, Jiang said.

The study was conducted as part of long-term research aimed at understanding how taste preferences and diet selection are affected by taste receptor genes.

The researchers wondered if pandas were able to taste sweet stuff because while pandas are plant eaters, their ancestors were meat-eaters. Many strict carnivores have lost their sweet-tasting receptor gene, called Tas1r2, and show no preferences for sweet-tasting compounds.

For instance, their previous research showed that any type of cat, from house cats to tigers, cannot taste sweets and, thus, do not like them.

Their experiments involved eight giant pandas at the Shaanxi Wild Animal Rescue and Research Center in China. The youngest was 3 years old and the oldest was 22.

The bears were given two bowls of liquid and permitted to drink for five minutes. One was filled with plain water. The other contained water mixed with one of six natural sugars: fructose, galactose, glucose, lactose, maltose and sucrose.

The researchers then did the same tests with five artificial sweeteners, but the pandas were far less interested in those.

Pandas previously lived in lowland areas, but human activities like agriculture, forest destruction and development exiled them to their current mountain terrain.

"We cannot travel back in time to understand what animals ate before their habitats were disturbed by mankind. But we can look at their DNA and their taste preferences and make inferences about their ancient diet," Reed said.

"Giant pandas' ancient diet may have included more foods than just bamboo - perhaps fruits, hence the sweet tooth. It may be that bamboo is an every-day food for giant pandas, but when sweeter foods are available they go for them," Reed added.

(Reporting by Will Dunham; Editing by David Gregorio)