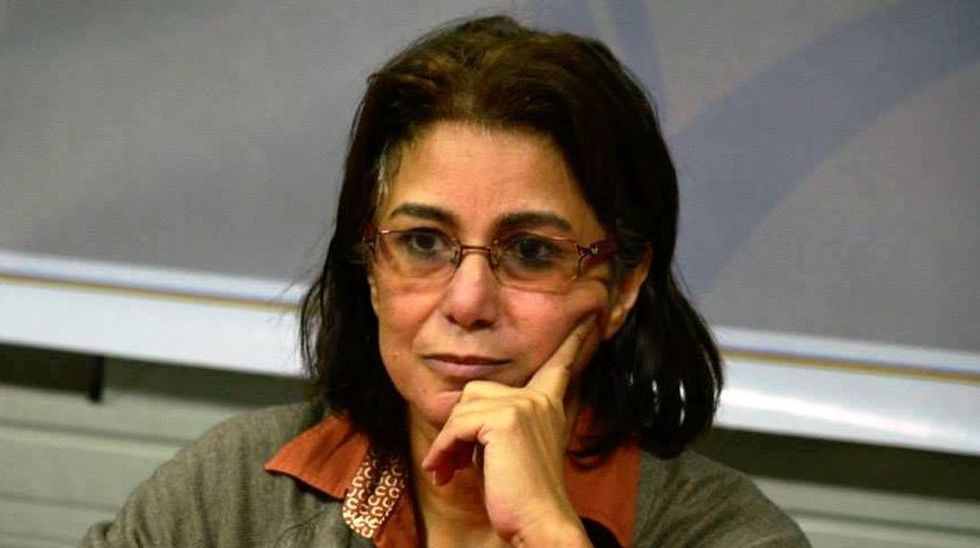 Hala Shukrallah, a Christian who now leads the liberal Dostour party, say her election marks a huge social shift in a land wedded to strongmen

Hala Shukrallah was elected leader of Egypt's Dostour party last week, since when journalists have barely stopped bothering her. Her party's reputation has something to do with it: Dostour ("Constitution") was founded by Mohamed ElBaradei, the exiled Nobel laureate many hoped would lead post-revolutionary Egypt. But there is another cause of the excitement.

Shukrallah is the first woman – and first Christian – to lead a major Egyptian party. At a time when the 2011 uprising seems to have achieved little, her election is a reminder of the seismic social shifts the revolution unleashed. At least, that is how she sees it. "What we're seeing here is that something truly on-the-ground is happening," Shukrallah, 59, says of her election. "I think it's a reflection of the changes in the people's psyche since the 25 January [revolution that toppled Hosni Mubarak]. They do not really see these elements as significant – being a woman, being a Copt, or whatever. These elements are no longer significant in comparison to a much bigger thing that they are aspiring to."

Women and Coptic Christians (who form around 10% of the otherwise Muslim population) have historically been largely marginalised from politics. But Shukrallah's election hints that this may slowly be starting to change, partly thanks to a shift in national consciousness created by the 2011 revolution, which encouraged people to challenge social structures.

Here and there, you can find similar signs. In December, leftist physician Mona Mina became the first woman to be elected head of Egypt's influential doctors' syndicate, a group led for years by male conservative Islamists. In terms of women's rights, Egypt's new constitution is thought more progressive than any before.

In the campaign to lead Dostour, Shukrallah – who earned her PhD from University College London – was not even thought of as "the female candidate": her closest rival, Gameela Ismail, is also a woman. Shukrallah feels she was elected for her ideas, which appeal to her party's revolutionary youth, and her plans to change the culture of Egypt's political parties, which too often centre on a single figure, rather than encouraging broad grassroots engagement.

"Our parties have always been a one-man show – both in the way that it's been ruled by one personality, and that it's usually been men who've been in the position," says Shukrallah, a veteran activist jailed for her politics three times in the 1970s and 80s. In changing this culture within Dostour, she hopes to encourage a similar transition across a society that has relied on strongman leadership.

But cynics say that Shukrallah's election, and what she stands for, matters little in an Egypt that again has narrowing room for political debate. Last week three activists who dared to campaign for a No vote in January's constitutional referendum were jailed, the latest instalment in a crackdown on dissent that since July has seen more than 4,000 killed and 16,000 jailed – most of them Islamist supporters of ex-president Mohamed Morsi, but increasingly secularists as well.

"If we continue with a return to the old Mubarak policies, I don't think any of the parties will be able to have an impact," admits Dostour's spokesman, Khaled Dawoud. Dostour was one of a plethora of new centre-left groups to emerge in the post-2011 period. But none did well in any of the parliamentary or presidential elections that followed. Insiders say Dostour has struggled more than most: at its peak it had 25,000 members but, after ElBaradei left, that fell to just 18,000, with several key figures jumping ship.

But Shukrallah says groups like Dostour are weak not through laziness but because they were not allowed to develop under Mubarak and his predecessors. "The only organised force that had been allowed to evolve was the Muslim Brotherhood," she says. "This is something the west does not see: from the 70s, and in the 80s, 90s and 2000s, the democratic movement was being smashed. You couldn't rally anywhere without getting arrested – meetings between middle-class intellectuals and social movements were not allowed… whereas the Muslim Brotherhood was allowed to infiltrate the slum areas through the mosques."

As a result, groups like hers started life after 2011 from a standing start, Shukrallah says, and it will take time for them to evolve. She argues that her election shows this evolution is slowly happening, and that the "residues" of post-2011 change remain.

"What has happened in the Dostour party is a reflection of these residues – of these real, deep changes in the psyche of the Egyptian people, and the Egyptian youth," she says. "This is what we've been saying all along. Whatever happens, nothing can return us back to pre-25 January. Nothing."