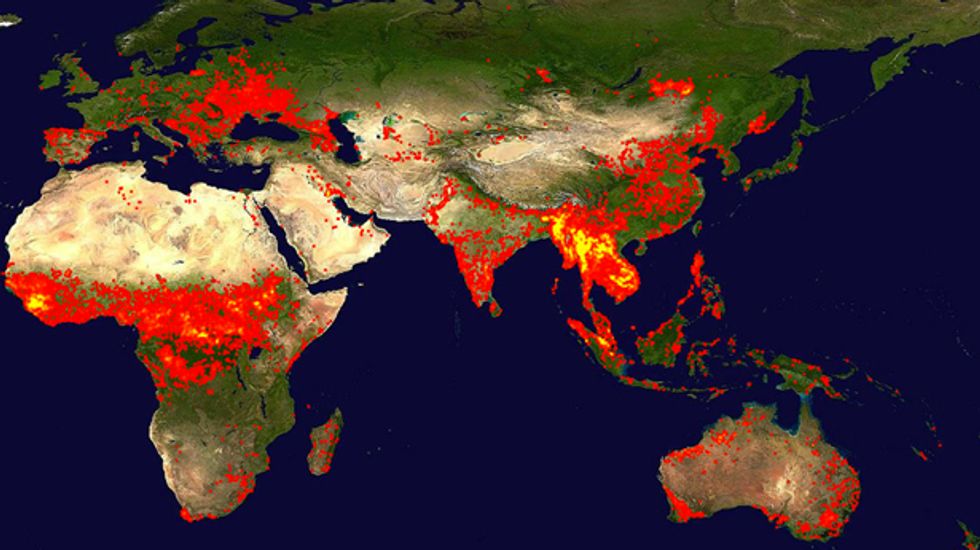 High above the vast Indonesian island of Sumatra, satellites identify hundreds of plumes of smoke drifting over the oil palm plantations and rainforests. They look harmless as the monsoon winds sweep them north and east towards Singapore, Malaysia and deep into Cambodia, Laos and Thailand. But at ground level, south-east Asian cities have been choking for weeks, wreathed in an acrid, stinking blanket of half-burned vegetation mixed with industrial pollution, car exhaust fumes and ash.

From Palangkarya in Borneo to Kuala Lumpur in Malaysia, the air has been thick, the sun a dull glow and face masks obligatory. Schools, airports and roads have been closed and visibility at times has been down to just a few yards. Communities have had to be evacuated and people advised to remain indoors, transport has been disrupted and more than 50,000 people have had to be treated for asthma, bronchitis and other respiratory illnesses in Sumatra alone. Last week more than 200 Malaysian schools were forced to close, and pollution twice reached officially hazardous levels.

The Asian "haze", which comes and goes with the wind and droughts, is back with a vengeance just eight months after an embarrassed Indonesian government promised it would never happen again and was forced to apologise to neighbouring countries for the pollution that blanketed the region in June 2013.

Mixed with the dense photo-chemical smogs that regularly hang over most large traffic-choked Asian cities, south-east Asia's air pollution has become not just a major public health hazard but is said to be now threatening food production, tourism and economic expansion. In addition, say scientists, it may now be exacerbating climate change.

According to Nasa satellite maps, more than 3,000 separate fires have been recorded across Indonesia, Thailand and Malaysia since mid-January, more than in June 2013 when the pollution spiked to dangerous levels and became a regional diplomatic crisis. This time, the monsoon winds mostly spared Singapore but sent the thick smog from burning peat soils and vegetation over much of the region. Around 10 million people and an area the size of Britain and France have been affected.

Just as in 2013, most of this year's fires appear to have been started in Riau province, northern Sumatra, the centre of the rampant Indonesian palm oil and pulp-paper industries. According to President Susilo Bambang Yudhoyono, 70% of these fires were lit by landowners wanting to clear ground for more plantations. But while Indonesia is widely blamed for the air pollution, the latest satellite images show fires burning and haze spreading across Burma, Thailand, Cambodia and Laos and as far away as the Philippines and Papua.

What has surprised observers is the timing: the burning season, when farmers clear land, does not usually start for many months. Monitoring groups such as Walhi, the World Resources Institute and Greenpeace say the fires are linked both to the worst drought seen in years and corruption and inaction at government level. So far, says the Riau government, only a handful of suspects have been held for setting the fires.

Nearly half are burning on land managed by large pulpwood, palm oil and logging companies which have turned the rainforest into a giant fire-prone region by clearing millions of acres for plantations, says Nigel Sizer of the Washington-based World Resources Institute, which uses satellite data to pinpoint hot spots. The corporations have denied involvement, saying the latest fires are illegally set. "The fires are starting outside our forest concessions but with the heavy, circular winds they're jumping everywhere," said Kusnan Rahmin, president director of the pulp and paper manufacturer April Indonesia.

Sizer says: "Even if they did not start the fires, they are responsible for massive and dramatic clearing of forests in the regions that have been burning, and to some extent for the conflicts with local communities that may be starting fires to stake their claim to land awarded in concessions to the companies."

"Once ignited, peat fires are extremely difficult to extinguish and generate massive air pollution that contributes to the choking haze now blanketing much of Sumatra," says Rhett Butler, editor of the international forest conservation website Mongabay.

Scientists now fear that the Asian haze will intensify and become an annual event as the population of the region rises to an estimated five billion people and climate change bites over the next 30 years. This week's IPCC report on the expected impacts of climate change will warn of the cities becoming unliveable in for millions as temperatures rise. Droughts are expected to become longer and more intense and the number of extremely hot days to grow.

Still unclear is how far the haze from burning forests feeds into Asia's rapidly worsening urban air pollution to form a semi-permanent toxic cloud thick enough to disrupt monsoons and weather patterns across the world and reduce sunlight and crop yields.

From being more or less accepted as the inevitable price of industrial development and poverty reduction just a few years ago, air pollution has risen dramatically up the region's political agenda as the costs are counted. Asia is now the centre of global air pollution, which along with obesity is the world's fastest growing cause of death.

Every year, says a recent Lancet report, more than 2.1 million people in Asia die prematurely from air pollution, mostly from the minute particles of diesel soot and gases emitted by cars and lorries, as well as half-burned vegetation from forest burning. Of these deaths, 1.2 million were in east Asia and China, and 712,000 in south Asia, including India.

According to the Lancet report, by a consortium of universities working in conjunction with the UN, Asia loses more than 50m years of healthy life from fine particle air pollution per year. Air pollution also contributes to higher rates of cognitive decline, strokes and heart attacks, it says. In a separate report last month, the Shanghai Academy of Social Sciences claimed that Asian air pollution was now affecting climate around the world and making cities like Beijing uninhabitable and suggestive of what a "nuclear winter" might be like.

"Pollution originating from Asia clearly has an impact on the upper atmosphere and it appears to make such storms or cyclones even stronger," says Renyi Zhang, a professor of atmospheric sciences at Texas A&M University and a co-author of the study with Nasa scientists. "This pollution affects cloud formations, precipitation, storm intensity, and other factors and eventually impacts climate. Most likely, pollution from Asia can have important consequences on the weather pattern here over North America", said Zhang. The study backs UN research that suggests a layer of air pollution, the "brown cloud", regularly covers the upper atmosphere over Asia between January and March and could precipitate an environmental disaster that could affect billions of people.

It is, says scientists, the result of forest fires, the burning of agricultural wastes, dramatic increases in the burning of fossil fuels in vehicles, industries and power stations, and emissions from millions of inefficient cookers burning wood and cow dung.

"The effects of the 'Asian brown cloud' have been linked to the retreat, over the last half a century, of glaciers in the Himalayas that supply water to major rivers, including the Yangtse, the Ganges and the Indus," says co-author Harshal T. Pandve.

Asian leaders have been slow to understand and act on air pollution, but are now aware of people's anger. China, embarrassed by air pollution before the 2008 Olympics, says it is now costing its economy $400bn a year, or 6% of its GDP. Beijing last month pledged $1.6bn to reward cities for tackling it and said it planned to close 300 factories. Meanwhile, Singapore has proposed a law which would allow it to fine foreign companies for causing cross-border air pollution. But observers say that passing new laws will not enough. In the Philippines, where car numbers are predicted to quadruple within 20 years, a brown cloud hangs over the mega-city of Metro Manila most days, despite higher standards for vehicles and draconian laws.

"Most Asian governments are still concerned with economic development to the detriment of everything else," says Vicky Segovia, of Manila's Clean Air partnership. "We are not impressed by any of them."