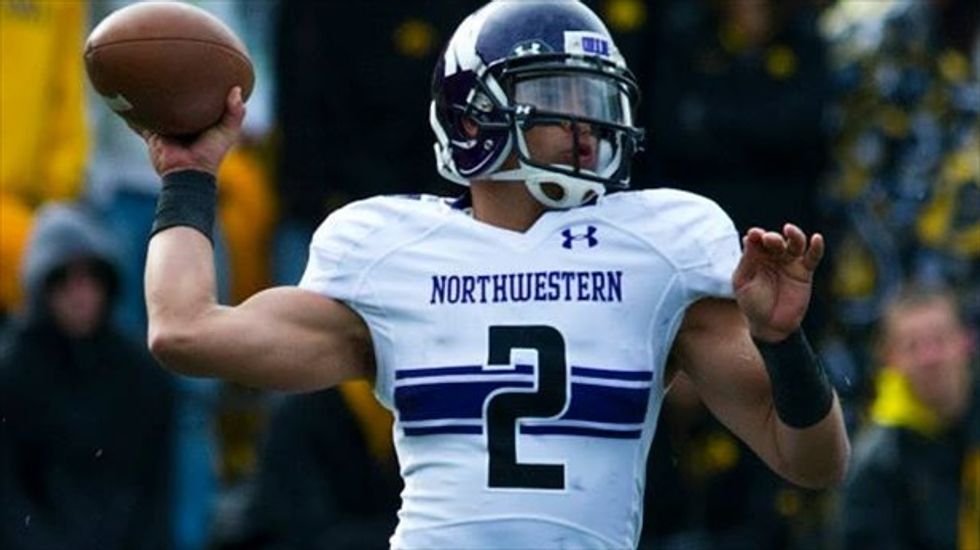 A day after football players at Northwestern University tentatively won the right to unionize, they and the Illinois school dug in for a lengthy legal and political battle that could reshape the multimillion-dollar sports business that U.S. colleges have built around unpaid amateur players.

As politicians and college sports officials warned that athletes' push to be paid as university employees -- rather than be compensated only through scholarships - could lead to calamity at many schools, the issue began to shift to Washington.

That is where the five-member National Labor Relations Board (NLRB) will consider Northwestern's bid to reverse a regional NLRB director's ruling on Wednesday in favor of the players. The regional director, Peter Sung Ohr, rejected Northwestern's contention that its football players are amateur athletes and granted the players the right to unionize as school employees.

A date for the Washington appeals hearing has not been set. Northwestern has vowed to explore "all of its legal options" to reverse Ohr's ruling.

"Our student-athletes are not employees, but students," said Alan Cubbage, spokesman for the private university that is just north of Chicago on Lake Michigan.

In Washington, Republican Senator Lamar Alexander, a former president of the University of Tennessee, expressed a similar sentiment. "This is an absurd decision that will destroy intercollegiate athletics as we know it," Alexander said.

There has been a growing national debate about whether to pay U.S. college athletes, particularly at big-time football programs such as Northwestern. Teams typically earn millions of dollars each season through television contracts, ticket sales and merchandising.

For years, athletes have complained about receiving no compensation beyond their scholarships at a time when the business of major college sports has boomed, with hundreds of millions of dollars in television contracts leading the way.

The National Collegiate Athletic Association (NCAA) oversees sports programs for about 420,000 college athletes and reported $872 million in revenue in 2012. It is not a party to the NLRB proceedings, which pits Northwestern against its football players, but the NCAA has made clear that it stands with the university in opposing efforts to unionize and pay college athletes.

"Over the last three years, our member colleges and universities have worked to re-evaluate the current rules," NCAA Chief Legal Officer Donald Remy said in a statement.

"While improvements need to be made, we do not need to completely throw away a system that has helped literally millions of students over the past decade alone attend college."

Kain Colter, a quarterback for Northwestern, teamed up with Ramogi Huma, a former University of California-Los Angeles player, to form a union they call the College Athletes Players Association.

"So proud of my teammates, Ramogi, lawyers and supporters around the nation! This is a HUGE win for ALL college athletes!" Colter posted on his Twitter account Wednesday.

The NLRB's deliberations over Northwestern's appeal could take months, including hearings and a vote by the board. If Northwestern loses before the full NLRB, it could take its case to federal court.

If the school refused to recognize any union approved by a vote of the players, the NLRB, which does not have enforcement powers, likewise could turn to a federal court under U.S. labor law.

Such obstacles virtually ensure that college sports will not be upended overnight by Ohr's decision. But in the near term, analysts say, the decision is likely to put more pressure on the NCAA to change some of its policies, including whether to offer athletes some compensation beyond their scholarships.

The Ohr decision "will put additional pressure on the NCAA to change its rules with regard to what compensation and monies can be paid to student athletes," said Joseph Farelli, a New York-based labor and employment attorney at Pitta & Giblin.

The NCAA, based in Indianapolis, already is facing questions about the adequacy of its safety protections for athletes, and discontent with rules that allow the association and its member schools to make huge profits while barring players from doing the same.

Northwestern's football program generated revenue of $235 million and expenses of $159 million from 2003 to 2012, according to its report to the U.S. Department of Education.

In his 24-page decision, Ohr detailed his reasons for ruling that Northwestern could be considered an employer of its roughly 85 scholarship football players. Ohr focused particularly on the restrictions the school places on players, and the time they spend on team duties compared with the time they spend doing school work.

When they agree to play for the Wildcats, Ohr noted, football recruits get a "tender" that details the terms of their scholarship offer. Outside employment, social media use and behavior are restricted. Violations can result in suspension or dismissal from the team.

Players spend 40 to 50 hours a week during the regular season practicing, playing and traveling to games, and receive scholarship assistance worth about $61,000 per year, Ohr noted.

"Not only is this more hours than many undisputed full-time employees work at their jobs, it is also many more hours than the players spend on their studies," Ohr wrote.

Ohr's conclusion may bolster nearly identical arguments made in lawsuits pending against the NCAA.

A proposed class-action anti-trust lawsuit filed last week in federal court accuses the NCAA of colluding to deprive university athletes of earning more from their sports than the value of their scholarships. Another lawsuit challenging a rule that bars players from earning money from the use of their images is expected to go to trial later this year.

Under U.S. President Barack Obama, the NLRB's board is controlled by Democrats, the political party more closely aligned with organized labor - a factor that could weigh in the Northwestern players' favor. The congressional elections in November will not change the board's makeup.

The NLRB supervises union elections and polices unfair labor practices in private-sector workplaces. Labor relations in government workplaces - including those in state-backed universities that make up the vast majority of the 120 or so schools with major football programs - are covered by separate federal and state laws not administered by the NLRB.

So Ohr's decision, even if it is upheld, would apply only to Northwestern and the 16 other private universities with major sports programs. Even so, public universities are keeping a close watch on what happens in the Northwestern case.