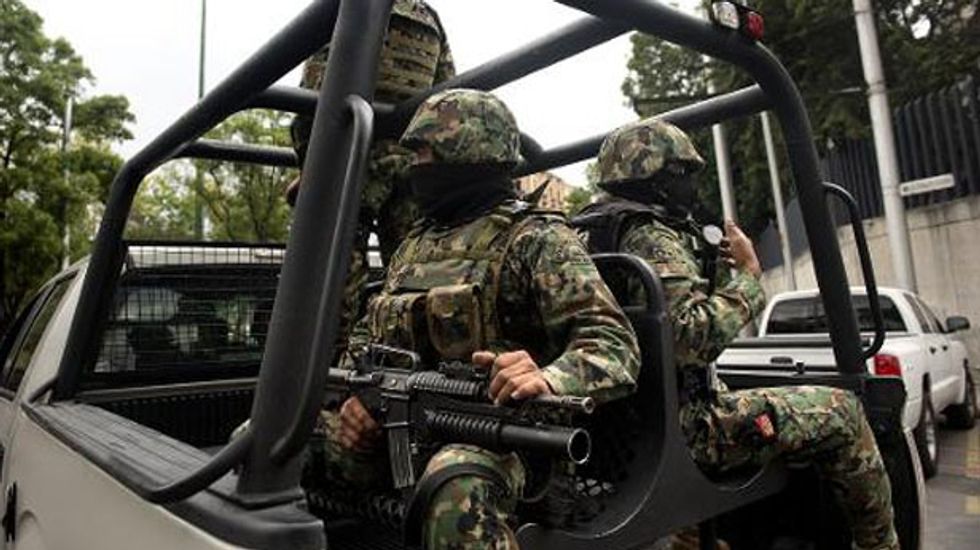 Mexican soldiers and police killed 10 Zetas drug cartel suspects in a gunfight in the eastern state of Veracruz, authorities said.

The skirmish erupted after security forces were shot at from a house as they searched for a kidnapping gang while driving down an avenue in the city of Perote, the agency said in a statement.

"As a result of this clash, nine men and one woman were killed," the statement said.

The authorities said the suspects were part of a Zetas unit dedicated to kidnapping and one of the cartel's most dangerous cells.

Authorities seized 10 rifles, munitions, shirts with federal police insignias and hats with the shield of an investigative unit, the statement said.

Founded by a former elite military troops, the Zetas are known as a vicious gang blamed for much of the violence that has plagued Mexico in recent years.

But authorities believe the Zetas have been weakened following blows to their leadership in the past two years.

Zetas kingpin Miguel Angel Trevino was captured in the northeastern border state of Tamaulipas in July 2013, while his predecessor, Heriberto Lazcano, was killed in a shootout with troops in October 2012.

The cartel has branched out to several activities, including the smuggling of migrants to the United States, extortion of businesses and kidnappings for ransom.

While officials say that murders have dropped in the past year in Mexico, where tens of thousands have been killed in drug violence, the number of kidnappings and extortion rackets have soared.

Federal officials say kidnappings and extortion have increased because authorities have had success against the drug cartels, forcing them to branch out.

Three quarters of the kidnappings have taken place in 10 states, including Veracruz. Mexico counts 31 states plus Mexico City.

President Enrique Pena Nieto, who pledged to reduce everyday crime when he took office in December 2012, created a special anti-kidnapping unit in January.

National Anti-Kidnapping Coordinator Renato Sales told a news conference on Wednesday that organized crime groups have been "dispersed," causing them to ?migrate? from drug trafficking to other illegal activities such as kidnappings for small ransoms.

He said the numbers have also gone up because more kidnappings are being reported by citizens, who have more trust in the authorities.

Sales added that 147 suspected kidnappers have been arrested since January while 15 victims have been rescued. The authorities have dismantled 21 gangs dedicated to kidnapping, he added.