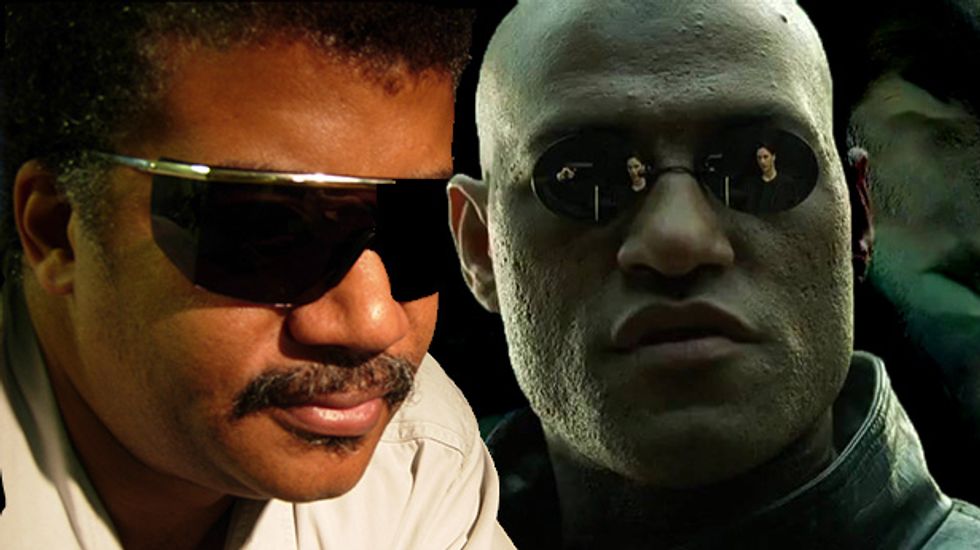 That disturbance you might have felt Sunday in the fabric of spacetime happened when Neil deGrasse Tyson, in New Mexico filming episodes of Cosmos, spent some time talking with Laurence Fishburne, who happened to be nearby filming an indie sci-fi thriller, The Signal.

The two geek icons talked for Neil's Star Talk Radio Show about how much science fiction and comic books were huge influences on them. Fishburne talked about growing up in Brooklyn and how much he loved going to Hayden Planetarium in Manhattan as a kid -- he didn't seem to realize that deGrasse Tyson is the guy who runs the Hayden today. "Oh, you got the keys?" Fishburne exclaimed as he realized he could hit up Neil for a tour.

The astrophysicist was clearly in awe of the actor, but he also had to point out to the man who was Morpheus that there was a serious science flaw at the center of The Matrix. "Tell me!" Fishburne said.

Neil explained that it didn't actually make sense to feed and keep alive human beings so you could use them as living batteries -- you'd always end up using more energy to create less. "But it's really cool, though. It's a case where coolnesss overrides everything," Neil said with a laugh.

Neil then hit Fishburne with his Morpheus impression, but he should probably stick with his Cosmos gig.

Then it was Fishburne's turn to play the fanboy when Neil told him that he'd been featured in a recent issue of a Superman comic. Neil admitted that he'd asked the artists working on the issue to maybe leave off a few pounds when they drew him. But he was told that in the world of comics, "everyone looks good!"

When Neil asked Laurence if there was a science fiction role that he wish he'd done, the actor said he would like to have played Dr. Manhattan. The two of them then pronounced Watchmen, "best of genre."

Is there any question about the universe that you've been harboring, deGrasse Tyson asks at about the 25-minute mark, and Fishburne put the astronomer on the spot: Had science and religion tried to iron out their differences?

"There are panels on this all the time," deGrasse Tyson said, "but they never converge." He then explained the situation of the "God of the gaps" -- that if you ascribe to God a natural phenomena, like epilepsy was once thought to be a kind of possession, for example, then once a scientific explanation is found, God's territory shrinks.

So much has been answered, Fishburne acknowledged, but there must be some space where the two sides might ask, what is the nature of God?

But Neil pointed out again that science is filling in that space. "We've been off-world," Fishburne agreed, a sign of the power of science.

"We finally saw the Earth the way it was meant to be seen," Neil said.